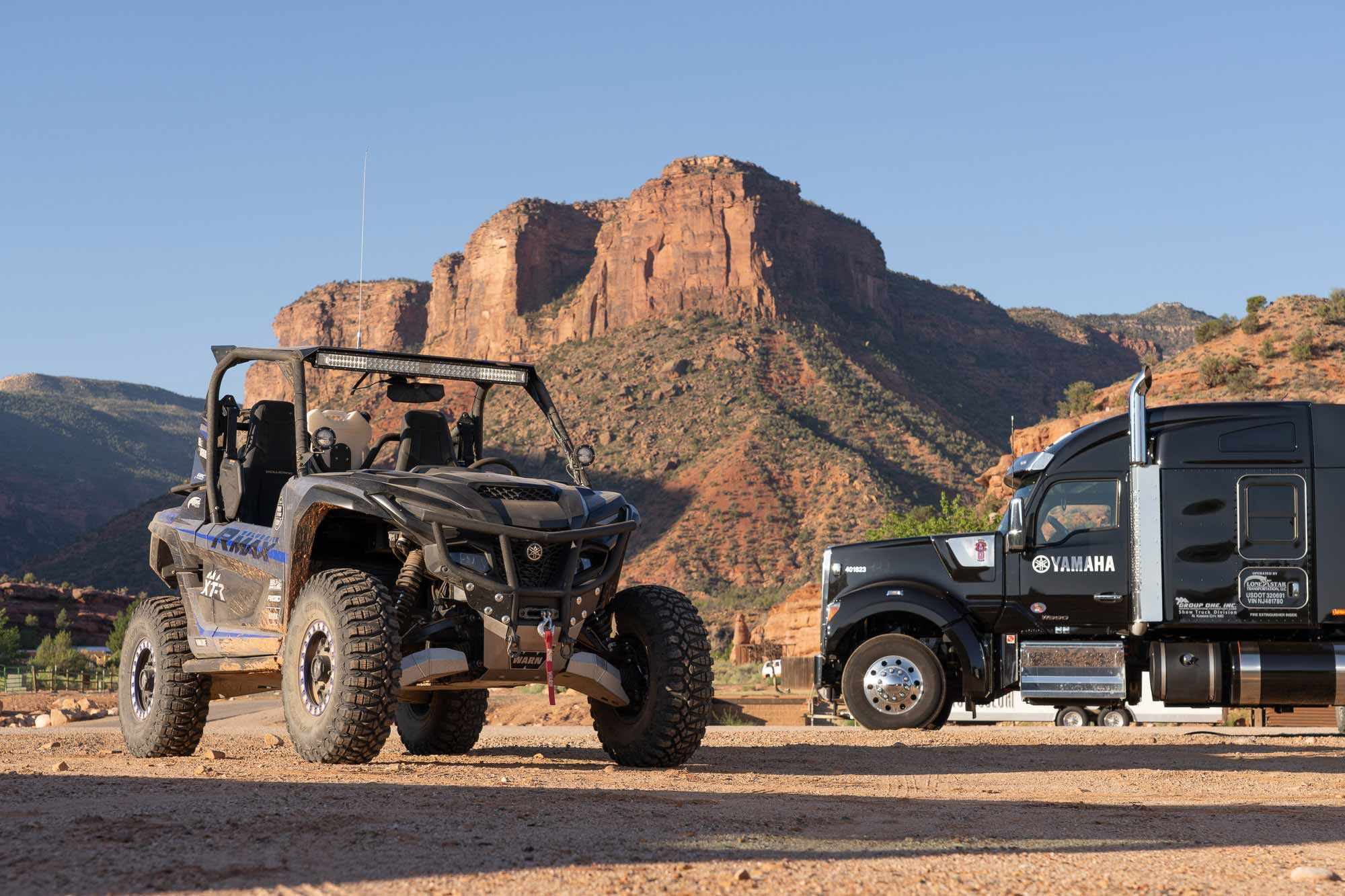 Yamaha AdventuRMAX2 striking a pose in front of a bluff outside Gateway, Colorado. (Yamaha Outdoors/)

Several months ago Yamaha pulled the covers off two concept UTVs aimed at the overlanding crowd. Having taken a two-seater RMAX2 1000 and four-seater RMAX4 1000 from the assembly line, Yamaha announced it had worked to develop purpose-built vehicles to tackle extended travel to remote places. The two rigs are an homage to the Yamaha Outdoors motto, “Realize Your Adventure.”

We recently spent some time with Yamaha and its AdventuRMAX rigs in the La Sal Range in eastern Utah. We would meet the rigs for the first time at our base of operations just outside of Utah in Gateway, Colorado. 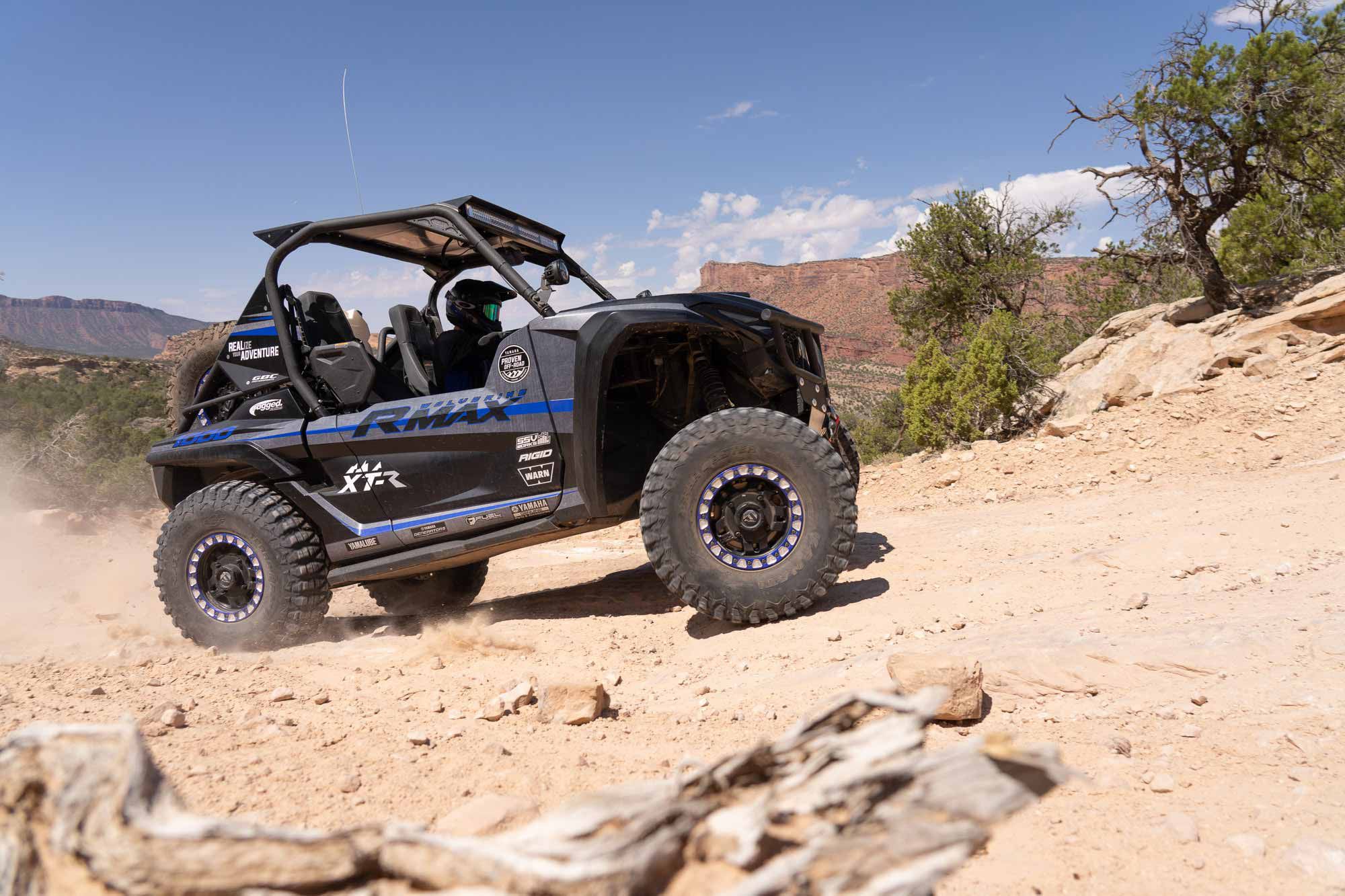 Protection and safety were paramount in the AdventuRMAX2’s development. (Yamaha Outdoors/)

The AdventuRMAX2 acts as the prerunner. Light, fast, and nimble, it’s capable of consuming miles at a blistering pace. The hydraulic-assist dump bed has been removed and in its place sits an integrated trophy truck-style caged cargo area that holds spare fuel, a cooler, extra tires, and safety gear. Aside from the modified rear cage section, the rest of the RMAX2′s bones are factory. The AdventuRMAX4 models in the Colorado desert, ready and waiting for their next job. (Yamaha Outdoors/) 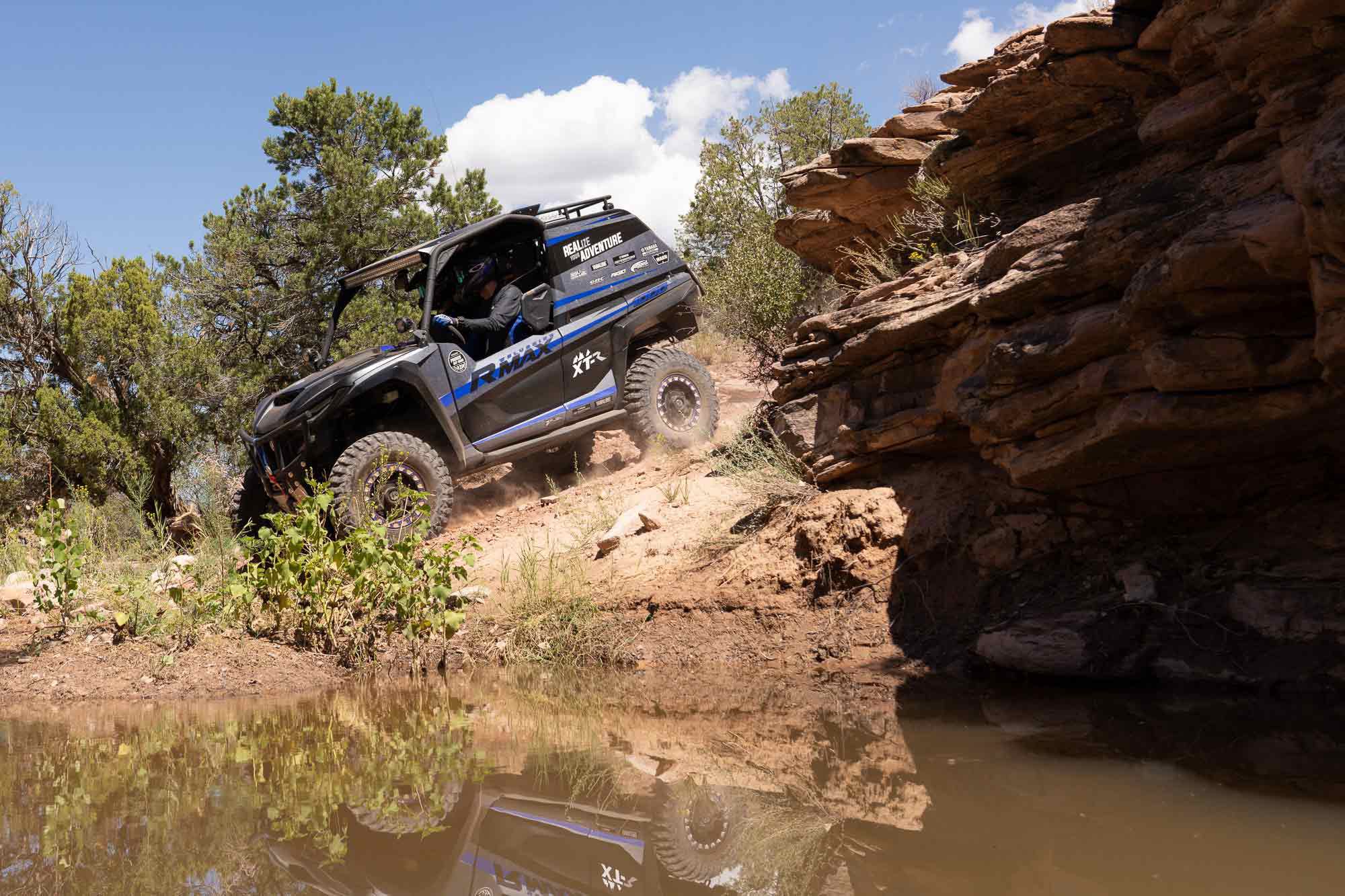 The AdventuRMAX4 vehicle took the role of support rig. The rear passenger seats and cargo area have been removed, converted into a stout carryall that mimics Dakar T5 trucks. Yamaha was able to retain the rear doors to act as quick access weather-resistant cargo holds on each side of the vehicle. The massive rear box holds everything you might need while out on the trail, from vehicle support to life support. Similar to the RMAX2-based rig, the RMAX4 platform remains fully stock from the floor down. The reduction in weight up top meant the factory Fox QR3 suspension would still pull its weight.

Yamaha started these builds with its potent XT-R trim level machines. No expense was spared in outfitting them for overlanding-style travel. Each comes with the full arsenal of Yamaha factory bolt-ons, including aluminum control arm plates, rock slider covers, and front skid plates to protect the undercarriage. A custom roll cage with an integrated top cargo rack keeps occupants safe. AdventurePro navigation and vehicle monitoring systems act as the brains of both trucks, ready to save the day if you find yourself lost in the middle of the desert. The rest of the platform remains untouched.

Adventuring into the unknown is part of what the 2021 Yamaha Wolverine RMAX 1000 was built to do. Making no concessions in any aspect of research and design, Yamaha built a rig capable of becoming so many things.

“That’s the idea behind the AdventuRMAX concept vehicles,” ATV/Side-by-Side Testing Manager Pat Biolsi said. “To show people what they can create from the RMAX 1000.”

While Yamaha doesn’t have any plans to put the AdventuRMAX trims into production, it’s refreshing to chase a manufacturer’s concept vehicle down a sharp Utah desert trail with its testing manager at the wheel, covered in dirt. These vehicles aren’t just for show; they’re for product development as Yamaha is already looking forward to the next generation of the RMAX lineup.