Yamaha Takes One More Lap With Valentino Rossi At EICMA 2021 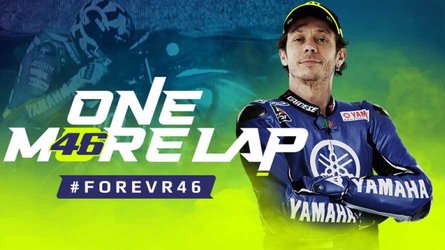 Valentino Rossi will compete in his final MotoGP race at the Valencia Grand Prix on November 14, 2021. After an illustrious 22-season premier class career, The Doctor will ride into the sunset. Not, however, before taking One More Lap at EICMA 2021.

Scheduled for November 25, 2021, the Yamaha-hosted event will take place at the EICMA MotoLive Arena. The outdoors venue may be a welcoming environment for attendees but organizers will still implement distancing, masking, and capacity regulations. Access to the event is free for EICMA-goers, but customers will need to buy tickets for the November 25, 2021, date by November 9, 2021.

Those that purchase admission in time will receive an email directing them to a special portal. On November 18, 2021, at 9:48 a.m., EICMA will open the webpage for attendees to reserve their One More Lap spot. During the event, Vale will share stories from his historic MotoGP career and partake in a lap around the exhibit’s short race track.

Before the One More Lap event, Rossi will compete in the final two races of the 2021 season. On November 7, 2021, the MotoGP grid will lineup for the penultimate round at Portugal’s Algarve International Circuit. One week later, the Valencia Grand Prix will serve as number 46’s swan song. Despite The Doctor’s disappointing results in 2021, long-time fans hope he can go out with a bang. After starting the San Marino Grand Prix in dead last, he finished his final home round in Italy in the top 10.

Over Rossi’s 22-year premier class career, he’s captured 7 world championships, 199 podiums, 89 wins, and the hearts of countless viewers. The sport flourished during Rossi’s reign with his charisma and instant-classic duels drawing viewers en masse. For racing superfans that aren’t able to make his final two races, the One More Lap event at EICMA may be a great place to catch the legend one last time.

Kawasaki Has Big Plans For The Z1's 50th Anniversary In 2022