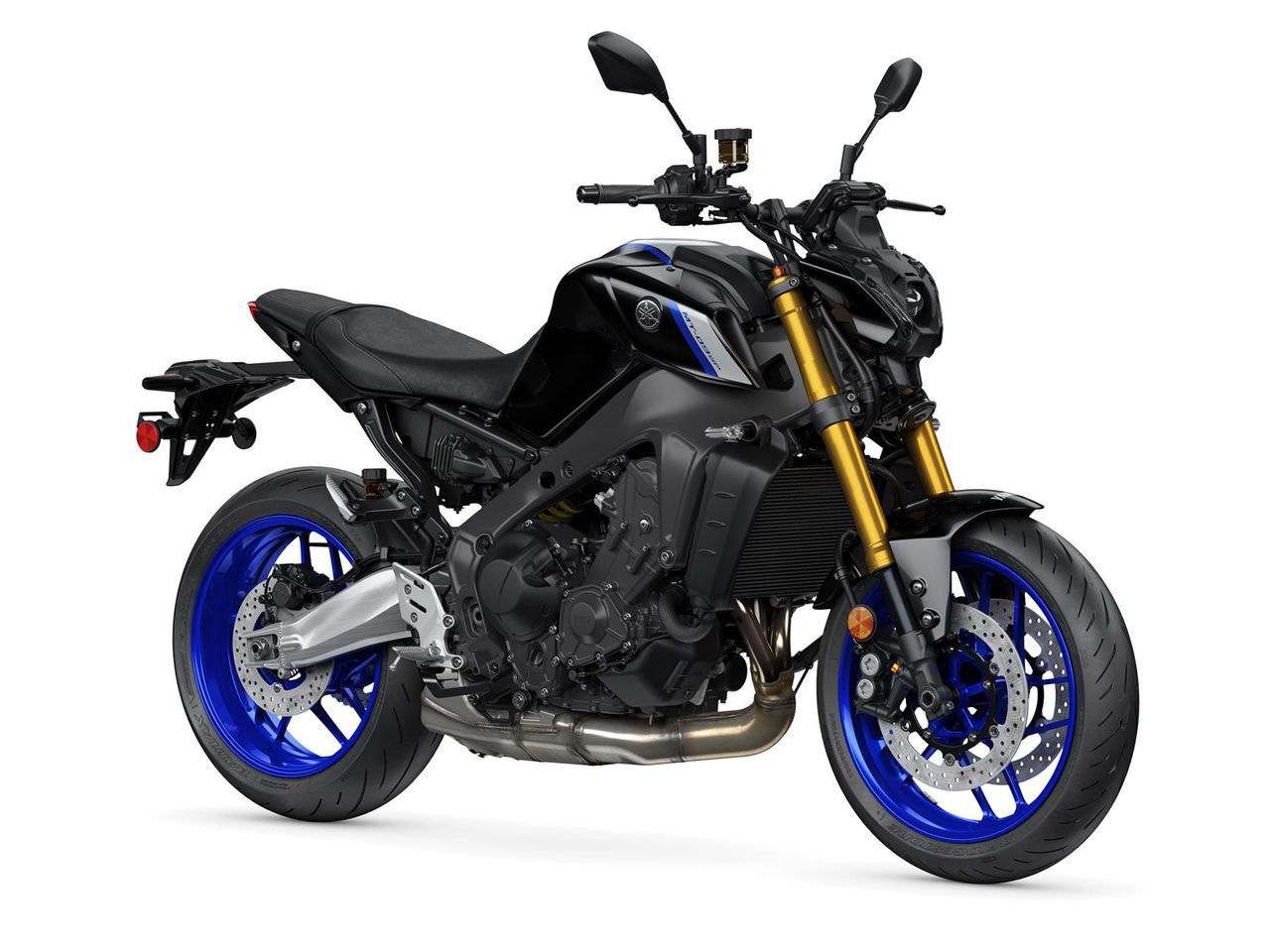 Given the gap in its range and the reveal of new documents, it’s likely Yamaha will be rolling out a new R9 model very soon (MT-09 SP shown). (Yamaha/)

It looks like Yamaha isn’t done with its new launches for 2022 as the firm has filed European type-approval paperwork for two as yet unreleased machines under the code names “RN82″ and “RN83.” The documents that have surfaced so far don’t tell us much more than that, but those code names alone give a surprising level of insight into the machines, including the ballpark of their capacity and the fact that they’re street oriented—sportbikes or naked roadsters—rather than cruisers or adventure bikes.

As many firms do, Yamaha uses code names designed to reflect a bike’s position in its range. In this case, the initial “R” means it’s a street model—a cruiser would have a “V” and an off-road or adventure bike would have a “D” in that position. The second letter, “N,” tells us that both new bikes have a capacity of between 750cc and 1,000cc. If it had been an “M” the bikes would have been between 600cc and 750cc, for example, while a “P” would mean a capacity of more than 1,000cc. 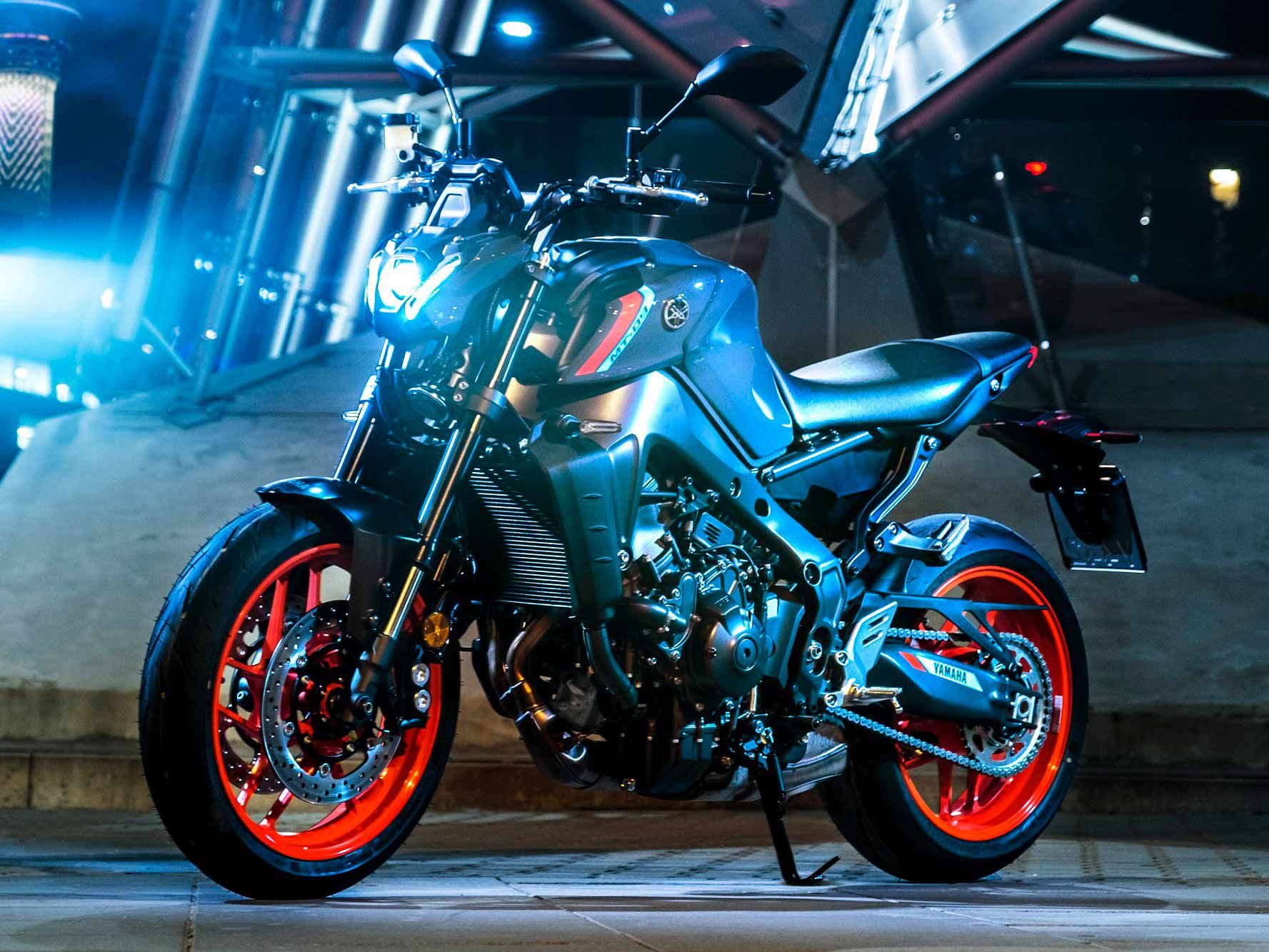 There are clear signs the MT-09’s 889cc triple will form the basis for two new sport models. (Yamaha/)

The very first bike to use the RN code—RN01—was the original 1998 YZF-R1, and the most recent new models to fit the same profile are the 2022 MT-10 (RN78) and the recently revamped XSR900 (RN80). Inevitably there are gaps in the sequence, representing projects that haven’t reached fruition, but the new approval applications show that RN82 and RN83 are both due to be launched soon.

To deduce further what these machines might be, we can start by looking at what engines Yamaha currently has in the “N” capacity bracket. Presuming these bikes use existing motors, there are only two options: the 889cc ‘”CP3″ triple from the MT-09, Tracer 9, and XSR900, or the 998cc “CP4″ crossplane-crank four-cylinder from the YZF-R1 and MT-10. It’s the former that seems a more likely candidate for the new models, since there are already clear indications that Yamaha has plans for two new machines based on the MT-09′s engine. 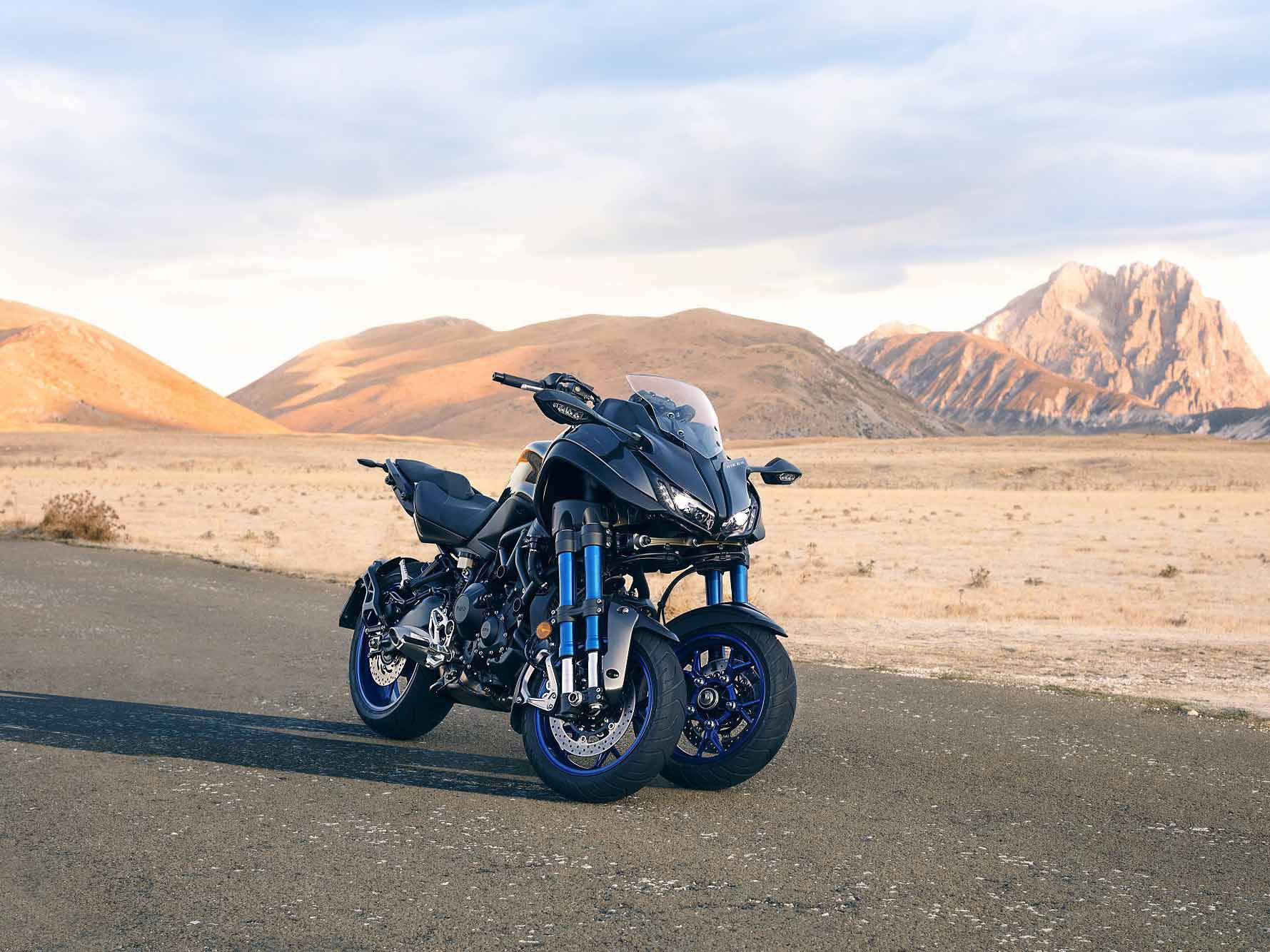 A next-generation, redesigned Niken with the updated 889cc CP3 engine will likely be one of those models (current model shown). (Yamaha/)

One model that’s virtually guaranteed to appear this year is the next-generation Niken three-wheeler. The current Niken (which was project number RN58) is the last remaining Yamaha triple to use the original 847cc version of the CP3 engine. The new, 889cc version is a substantial redesign, and in Europe it’s the only CP3 to meet the latest Euro 5 emissions rules. The current Niken remains on sale in Europe only thanks to a two-year grace period following the introduction of Euro 5, designed to allow manufacturers time to sell off existing stocks and develop new, emissions-compliant models. That period ends on December 31, 2022, so Yamaha needs to launch a new Niken by then or withdraw the model for 2023. Given the firm’s commitment to the three-wheeled cause, a replacement is virtually guaranteed.

Related: Yamaha R9 and R2 Models on the Way? 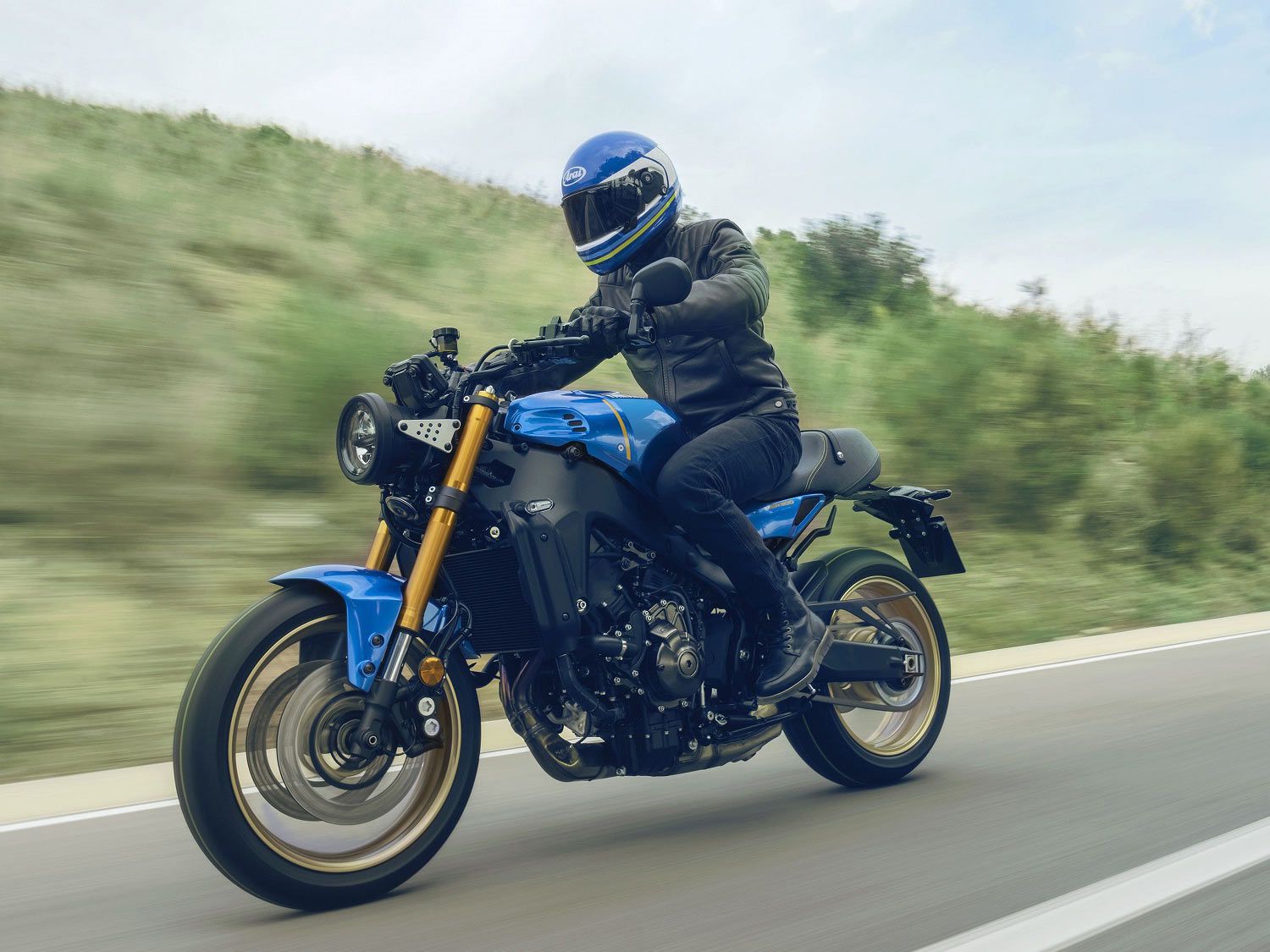 Trademarks for the R9 name have already been filed around the world, and with the CP3 engine and Deltabox frame in use on the XSR900 (shown), a faired R9 seems like a given. (Yamaha/)

Presuming an updated Niken is one of the new machines, what’s the other? One possibility, given the simultaneous appearance of the RN82 and RN83 in type-approval paperwork, is that it’s a second version of the Niken. Yamaha has previously considered and put development effort into an unfaired three-wheeler based on the Niken chassis, with a more MT-09-ish style. The original naked Niken idea didn’t reach the market, but it’s clearly a direction that Yamaha has in mind.

However, there are also other candidates. Notably, last year Yamaha filed multiple trademarks around the world for the “R9″ name, indicating that a sportbike based on the CP3 triple is under development. It makes a lot of sense: the YZF-R6 that’s currently Yamaha’s second-string sport model below the YZF-R1 lives on now as little more than a track-only machine, long since lost to road-going riders in Europe due to emissions rules. A YZF-R9 based on the MT-09 would have similar power and weight as an R6, with a healthy dose of additional torque. Since there are already multiple models using the same engine, and the latest MT-09, Tracer 9, and XSR900 now have a sport-style Deltabox frame, a faired “R9″ model makes a vast amount of sense, just like the R1 above it and the MT-07-based R7 that’s the next step down the chain. 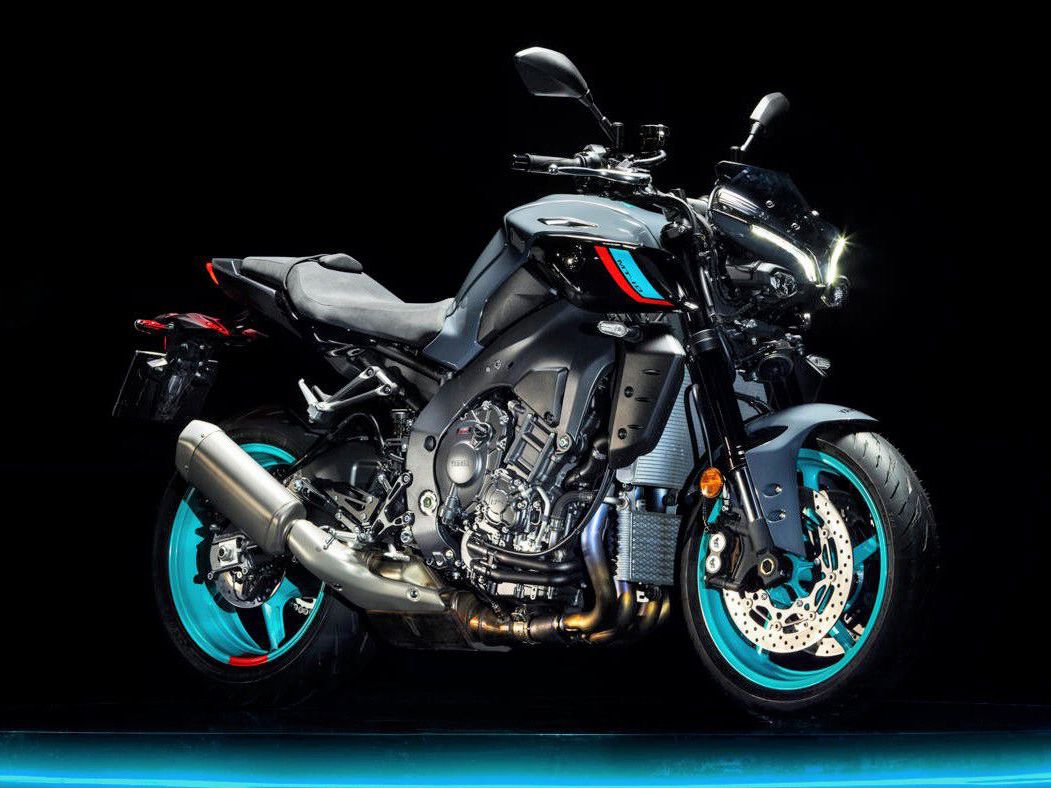 While the YZF-R9 is an obvious omission in Yamaha’s current lineup, another obvious gap in the range is a large retro model. The MT range runs all the way from 125cc to 1,000cc, and the R range does the same—apart from the missing R9. However, while there’s an XSR125, XSR700, and XSR900, there’s no MT-10-based XSR1000. Given the current popularity of retro-inspired naked machines, it might make a lot of sense.

But with both of the new bikes already submitted for type approval, we’re unlikely to be left waiting long to find out more about the RN82 and RN83.