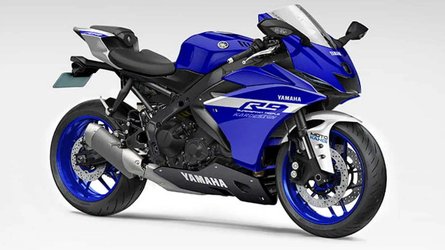 After discontinuing the YZF-R6 in November, 2020, Yamaha filled the void in its sportbike range with the MT-07-based R7. However, the parallel-twin-powered model doesn’t quite live up to the R6’s performance pedigree, leading many enthusiasts to speculate that Team Blue will bridge the gap between the R7 and R1 with an MT-09-based R9.

Additionally, bikes between 600-750cc receive an “M” code letter, those over 1,000cc are graced with a “P” designation, and models with 750-1000cc displacements earn an “N” classification. According to type approval documents, Yamaha has filed for an RN82 and an RN83 model.

For context, the original 1998 YZF-R1 carried the RN1 codename while the refreshed 2022 XSR900 went under the RN80 working title. Due to the sequential order of Yamaha’s code name system and both the CP3 (889cc) and CP4 (998cc) powerplants falling between the “N” category’s 750-1000cc range, the Japanese firm still hasn’t fully tipped its hand.

Given the recent trademark filings, many believe one of the models will be the R9 sportbike, but the second model isn’t as easy to pin down. The MT-09 line contains the standard trim and an up-spec SP variant. Yamaha could pair the R9 with an even sharper R9 SP, but other possibilities remain. While the MT-09, XSR900, and Tracer 9 GT received Iwata’s updated 889cc CP3 inline-triple, the Niken still houses the older 847cc CP3 mill.

If Team Blue doesn’t update its three-wheeler, the “N” designation also leaves room for a CP4-powered XSR1000 or even an R10 sportbike. Unfortunately, Yamaha’s latest submission presents more questions than answers, but it also makes us even more excited to see what the brand has in store in 2022.