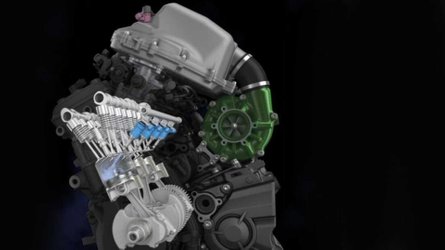 With electric motorcycles popping up left and right, and from a multitude of manufacturers both big and small, has the motorcycle industry all but resigned itself to the eventual demise of the internal combustion engine. Well, simply put, the answer is no. We’ve talked about how several companies such as Ducati and Porsche are investing heavily in the research of alternative fuels with bio-renewable components, also known as biofuels.

On top of that, a middleground between the outright electrification of two-wheelers seems to be hybridization—something we’re seeing in small scooters in the Asian market. There’s also hydrogen power, something that Kawasaki has been working on for a while now. Now, in an interesting turn of events, another renowned Japanese manufacturer is joining forces with Kawasaki. Yamaha has taken a seat at the table alongside Team Green. The two companies will be working together to develop new hydrogen engines for use in future motorcycle models.

Kawasaki has long seen hydrogen as an alternative fuel for its vehicles. It currently has technology that demonstrates the feasibility of hydrogen made from Australian brown coal in internal-combustion engines. Additionally, Kawasaki Heavy Industries is also the proprietor of the world’s first liquefied hydrogen carrier, called ‘The Suiso Frontier.’ Apart from motorcycles, Kawasaki also seeks to manufacture hydrogen powered-engines for heavy-duty vehicles and equipment such as land and sea craft, as well as a hydrogen-powered turbine generator.

Meanwhile, Yamaha, too, has expressed its solid intentions of going green. In fact, the company has goals of achieving 100 percent carbon-neutrality by 2050. In the not-so-distant-future, we can expect to see other major players join Kawasaki and Yamaha in the race to produce hydrogen-powered two-wheelers. Suzuki and Honda have also laid out plans of exploring alternative fuels and carbon-neutral solutions alongside the development of electric vehicles.