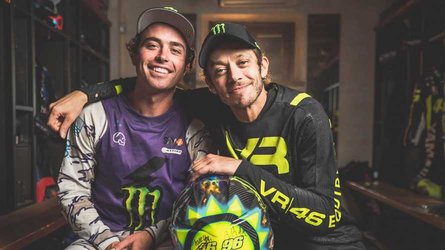 Valentino Rossi may have retired from MotoGP following the 2021 season, but that doesn’t mean he isn’t still riding. While The Doctor is considered one of the greatest road racers of all time, he also enjoys ripping through the dirt at his personal ranch in Tavullia, Italy. From a sprawling flat track circuit to a full motocross track, Rossi has everything he needs at his fingertips.

Of course, Vale has a complicated relationship with dirt bikes. During the 2010 season, a shoulder injury from a dirt bike crash hampered the number 46’s shot at a third consecutive title and tenth world championship. In 2017, The Doctor paid another visit to the hospital after another motocross crash. Though Rossi endured minor thoracic and abdominal trauma during the accident, the then 38-year-old suffered no fractures.

Despite those incidents, you can’t keep Vale off dirt bikes, especially when X Games gold medalist Axell Hodges pays a visit to Tavullia. In grand American fashion, Slay arrives in the Pesaro commune and wastes no time wheelieing through the city streets. With hooligan antics aside, Hodges sets his sights on the VR46 Motor Ranch, ducking the gate to avoid Vale’s adoring “fans”.

The hammy acting continues when the narrative shifts to The Doctor himself. Rossi may have put on a show for the MotoGP audience, but feigning surprise isn’t exactly a strong suit. With an intruder on his property, a fully-geared Rossi has no choice but to give chase on his factory-prepped Yamaha dirt bike. Unsurprisingly, huge air is had and pleasantries are exchanged.

With the two Monster Energy athletes enjoying their fair share of the Ranch motocross circuit, it was time for Hodges to leave his comfort zone. While the 2012 Loretta Lynn-Champion has been riding the dirt all his life, it marked the first time he ever took to the dirt oval. Luckily, Slay held his own, impressing Vale in the process.

Rossi may not be on a MotoGP grid any longer, but he shows that he enjoys riding dirt bikes more than ever.