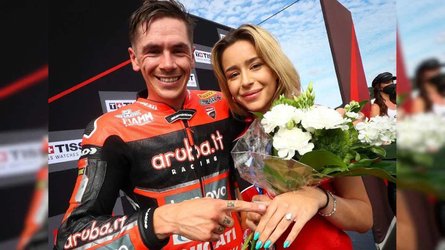 Racing is undoubtedly a thoroughly emotional experience. In fact, you can go through a rollercoaster of emotions simply watching it from the comfort of your home—from the anticipation prior to the start of the race, to the elation of seeing your favorite rider lead the pack, all the way to the feeling of utter despair has he crashes out of the race. Indeed, one can only imagine the tide of emotions rushing through the racers themselves.

WorldSBK rider Scott Redding is known to be one of the more vocal racers, readily willing to express himself, be it in post-race interviews or on social media. Following his heated fiasco with Yamaha racer Toprak Razgatlioglu in Race One of the Czech Round at Autodrom Most, suffice it to say that Redding was able to redeem himself in Race Two with a clean victory at Most. To make things even better, the British rider pulled off a surprise move that has since gone viral all over the internet. After receiving his trophy, he then hopped off the podium as his girlfriend of more than two years, Jayce, was ushered out onto the podium.

He then got down on bended knee and proposed to her. Talk about immortalizing an epic achievement with an even more life-changing proposal. While we can’t hear the exchange of words between the couple, it’s pretty clear to see that both of them were elated and that Jayce definitely said yes to the proposal. It goes without saying that Scott Redding had nothing short of a stellar weekend at Autodrom Most. Finishing in second place in Race One, winning Race Two, and proposing to his girlfriend is definitely a once in a lifetime achievement.

On top of dedicating his race win to Jayce, Redding also took the opportunity to dedicate the race to his friend, British Superbike rder Brad Jones, who sustained major injuries following an accident in Brands Hatch last July 24, 2021. Redding has been very vocal on social media about gathering support for his friend following the accident. As of August 5, doctors have been working on waking Jones up from a medically induced coma. Commenting on one of his most successful race weekends, Redding stated:”I had a lot of emotions both in my head and in my heart. I only had one goal and that was to win for Jacey, for Brad (Jones), for myself.”