Home » Articles » Would You Pick Your Dropped Bike Up Off The Ground With This Device?
Articles

Would You Pick Your Dropped Bike Up Off The Ground With This Device? 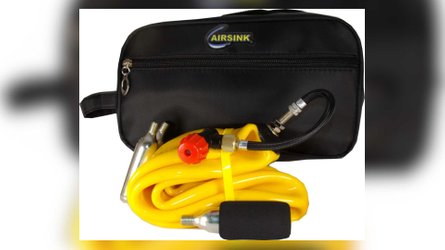 You know what sucks? When your bike falls over. While the circumstances that put it there may call for different reactions, one thing remains the same no matter what: You have to pick it up somehow. The bigger the bike, the more intimidating that might seem. What do you do?

Plenty of riding instructors teach methods to help you pick up a downed bike, but the moment of truth may seem much different when you finally face it. Plus, what if you have a back or other injury that isn’t bad enough to keep you from riding, but that also makes it a less than smart idea for you to be putting additional strain on yourself if you don’t absolutely have to? That’s the problem that French startup Airsink wants to solve.

The product is called Airbiker, and it’s a small pouch with an inflatable balloon and a few CO2 cartridges inside. There’s also a band to hold the front brake lever in place, making it much easier to lift your bike up off its side and onto the side stand.

As for how it works, the process is fairly simple. Lock the brake lever, then place the little balloon and CO2 cartridge for inflation underneath part of the downed bike to help give it a little boost. The Airbiker unit isn’t meant to completely lift the bike up for you, of course. Instead, it’s meant to just give a small boost to make it easier for you to grab the bars and guide it back up onto the side stand from a completely prone position on the ground.

What do you think, does Airbiker seem like a good idea, or like a thing that will take up space better occupied by something else on your next trip? Let us know in the comments.

This Custom Triumph Bonneville Shows Us That Less Is More