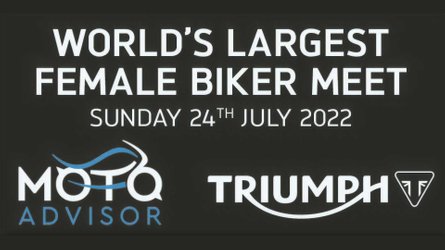 We’re almost a month deep into 2022, which means it’s an excellent time to plan all those world record attempts you’ve been thinking about. Over in the U.K., rider group Moto Advisor is currently aiming to set a new one for World’s Largest Female Biker Meet in July, 2022.

For those unfamiliar, Moto Advisor previously set this exact record with 1,132 female riders back in 2017. Still, after all the strangeness of the past couple of years, Moto Advisor is dreaming big—and also, of course, wants to keep that record by setting an even bigger one. The group is hoping to gather around 2,000 riders, if possible.

The group has partnered with Triumph Motorcycles to hold this event at the Triumph Factory Visitor Experience in Hinckley, which gives riders an even greater reason to participate. Men are, of course, welcome to attend—they just won’t be counted in the tally for the world record.

If you’re interested in participating, there’s an event page set up on Facebook that we’ll link in our Sources. The World Record attempt is currently scheduled to take place on Sunday, July 24, 2022 at the Triumph Factory in Hinckley, which we’ll also link in our Sources for easy reference in your personal event planning.

To be counted for the record, you’ll need to make sure you’re at the event for at least part of the time between 10 a.m. and 3 p.m. Upon arrival, you’ll be given a numbered sticker and asked to ride in front of a camera for the official count. All the normal kinds of outdoor festival things you’d expect are planned, including live music, food, drinks, vendors, a raffle, and so on. Admission is free, but the experience will be priceless.

All proceeds generated will be given to a selection of charities. Blood Bikers and Air Ambulance are two of this event’s designated charities, with a third one (yet to be named) in the works. You may want to keep an eye on the Facebook Event page in the future, because there will be an Eventbrite signup posted soon for insurance purposes. Apparently, the BBC is also supposed to be on site and filming, so you won’t want to miss it if you’re a female rider in the U.K.

Honda Fury and Shadow Cruisers Back For 2022