Home » Articles » What Happens When You Buy Yourself A 50-Year-Old, One-Mile Bike?
Articles

What Happens When You Buy Yourself A 50-Year-Old, One-Mile Bike? 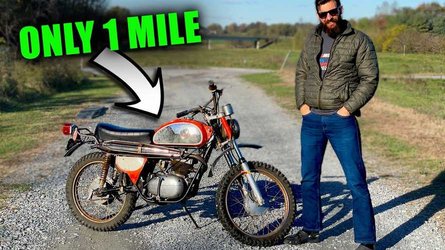 Here in 2021, it’s less uncommon than you might expect to see never-ridden vintage bikes showing up for sale. Low-mile or even no-mile models often appear on auction sites, or via the massive auction events held by the likes of Bonhams or Mecum. Sometimes, they’re even still in their shipping crates, which provokes additional levels of feeling.

Now, if you’re the type of person who believes that motorcycles are meant to be ridden, the very thought of such a bike sitting alone and unappreciated for decades may seem horrifying to you. Just like an incompletely-filled glass of water, though, different people have different perspectives.

What you may see as an unloved bike could instead be someone else’s undiscovered diamond, just waiting for a little TLC and a lot of new-old-stock parts. At least, that’s what Sean and Craig from YouTube channel Bikes and Beards thought when they found this zero-mile 1972 Benelli 175 enduro.

After a quick trip through a thoroughly picked-over motorcycle junkyard, the B&B guys decided to look elsewhere. That’s when they found this zero-mile Benelli for sale. As the story goes, it had been sitting “in a moist basement” for about 40 years after a dealership closed, just waiting for someone to do something with it.

Amazingly, this particular bike was never prepped for the showroom floor. That means, although it’s a zero-mile bike, it’s also an incomplete bike. No shifter, kickstarter, or chain was ever installed—so the search began to find any parts from other bikes that looked like they would fit.

The Benelli 175 Enduro originally came with drum brakes front and rear, a Marzocchi suspension, and a tidy little compartment in the tank for the tool kit. Tucked away inside, the B&B guys found a little warranty slip, still intact. (Since this bike is just about 50 years old and the original Benelli has long since gone out of business, we’re fairly certain it may not still apply.)

While B&B’s original plan was to get this vintage Italian enduro time capsule running before they brought it back to the shop, they didn’t succeed in this video. However, they say there’s a second video coming where we’ll see more. Do you think they’ll get it running before they leave the seller’s property, or do you think they’ll have to haul it back to S&S Cycles and work on it there?