Home » Articles » What Do You Think Of Schaeffler’s Free Drive Bike-By-Wire System?
Articles

What Do You Think Of Schaeffler’s Free Drive Bike-By-Wire System? 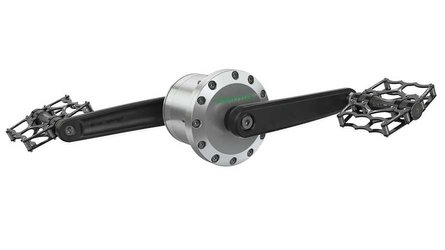 Electric two-wheelers have been around for quite some time now, and are fast becoming a staple in the transportation infrastructure across multiple counties. In Europe, in particular, light electric vehicles (LEVs) stand the chance to revolutionize urban mobility, with more and more cities such as France rolling out urban planning programs with the intent to ban cars in the city center.

Because of this, lightweight electric scooters such as the CAKE Makka, and e-bikes like the BMW i Vision AMBY are well and truly paving the way for the future of personal transportation. While these electric two-wheelers adopt more conventional powertrains, i.e., full electric power or pedal assist, German automotive parts maker Schaeffler has revealed its new hybrid powertrain concept called the Free Drive. As you can see, the Free Drive system looks like a set of bicycle cranks with a super beefy bottom bracket—that is, where the bearings are located.

Described as a “bike-by-wire” system, the Free Drive is exactly that. You pedal away at the cranks, and the rotational motion of your legs generates electricity which is subsequently fed into the rear wheel-mounted electric motor. Excess power, meanwhile, can be transferred to a lithium-ion battery. Now, this technology, although indeed very intriguing, seems to be rather strange as it overcomplicates an otherwise extremely simple concept, a concept which has been in use since the birth of the bicycle more than 200 years ago.

Schaeffler explains that this type of technology eliminates the need for a chain and sprocket, thereby resulting in less maintenance. However, lubricating a chain and adjusting derailleur gears is something even a seven year old can do. That being said, Schaeffler‘s Free Drive system can indeed be a practical option for fully-electric plug-in scooters, perhaps to provide an emergency source of energy when the main battery goes dead.

Mosko Moto Rolls Out Range Of Strata Merino Base Layers

Towing rules to change soon, you can tow a trailer with...