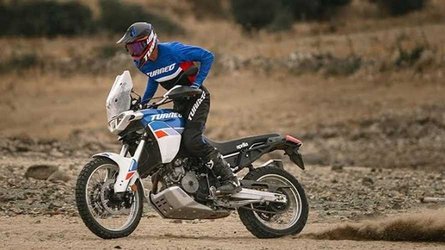 Ever since Aprilia teased the upcoming Tuareg 660 in a heavily obscured display box at EICMA 2019, the model has generated buzz for the Noale manufacturer. From spy shots to intermittent updates from Aprilia’s top brass, the Tuareg stayed in the headlines until it finally broke cover in July, 2021. While the presentation revealed the middleweight adventurer’s neo-rally aesthetic and key specs, the brand refrained from giving away too much information.

With Aprilia confirming attendance at EICMA 2021, the firm is now shifting the hype machine into overdrive. We may not have the pricing, availability, or complete specs at our disposal, but a new video launched on Aprilia’s YouTube channel gives us a sneak peek of the ADV in action.

Out on the trail, the newcomer flexes its muscles. Whether it’s plowing through rock gardens, sliding through a corner, or catching some air, Aprilia’s new platform looks eager to join the middleweight ADV battle.

At the moment, trail-oriented models are shaping the adventure segment. From Yamaha’s Tenere 700 to KTM’s 890 Adventure, riders are foregoing extra comfort and convenience found on flagship models for the light and nimble off-road maneuverability of smaller machines. Aprilia’s Tuareg 660 slots perfectly into this hyper-competitive category, and it looks poised to take the fight to its rivals.

According to Aprilia marketing manager Cristian Romeo Barelli, Aprilia built the Tuareg 660 to be “lightweight but not fragile, comfortable, very functional, and of course, with dynamic technical features that would support someone’s desire to explore.”

If the teaser video is anything to by, they nailed the brief. However, marketing materials and teasers don’t tell the full story. For that, we’ll have to wait for Aprilia to officially unveil the full Tuareg 660 details later this year. Until then, we’ll be on the lookout for more information as Aprilia readies its middleweight contender for the market.