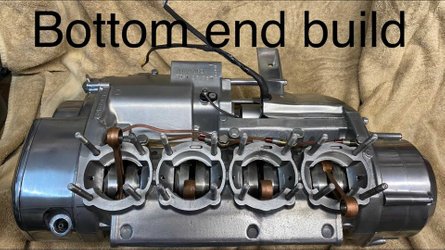 It’s a brand-new year, and you know what that means, don’t you? Time to finish up those projects you’ve had sitting around! Let Allen Millyard’s status as reigning shed-build mad genius, be the spark that sets you off toward making good progress on all the projects of your dreams in 2022.

Here’s the most important thing you can take away from videos like this: Sure, most of us probably aren’t on Allen Millyard’s engineering level, but that’s not the point. The greatest takeaway here is that every project, no matter how complicated it is, can be broken down into several smaller processes. Attacking each of those in an order that makes sense makes things easier—and if you write it down to keep things simple, can quite easily give you its own roadmap toward project completion.

Take this video, where Millyard’s finally ready to assemble the bottom end of his Kawasaki S1 four-cylinder engine build. Previous videos in the series show his build process for some of the individual components, but here’s where it all starts to come together. There’s a lot to consider here, but taking it on in a systematic, sensible way is pretty soothing, and the complete opposite of stressful.

Another extremely good rule of thumb when you’re working with systems that involve moving parts—such as, say, the bottom end of an engine—is to continually test that everything moves as it should during the process. Once moving parts are secured into position, you want to test them as soon as possible. Why? Because it’s much easier to go back one or two steps and fix something that’s not quite right than it is to have to tear the entire engine apart further into the build. It’s also a lot less frustrating, so it’s definitely not a step you should skip.

Millyard has shown his paper gasket-making process in videos before, but he shows it again here as well. Like everything else he does, it’s all about thoroughly following the process to get the desired result. As one example, we learn that punching the bolt holes in the big piece of gasket paper yields much better results than waiting until later. When the gasket paper surface is smaller, it’s much easier to accidentally tear—which makes sense if you take time to think about it, but is easy to miss if you’re in a big rush.

We also get a much-needed break in Tracy’s kitchen, where she’s busy making a mincemeat flapjack. Now, the word “flapjack” means something completely different for Americans and Canadians than it does for Brits, so a bit of explanation is in order. Apparently, in the U.K., a flapjack has zero to do with pancakes and is instead an oat-based granola bar. The one Tracy’s making in a square baking dish looks very tasty, and like just the thing to take the edge off when you’re working on a lengthy project on your workbench (or dining room table).