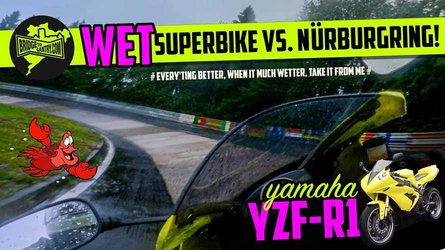 Do you remember Andy Carlile? He’s the absolute legend who set a new Nurburgring lap record on a road-legal 2005 Yamaha R1 back in 2012. The lap was 7 minutes and 10 seconds, beating the previous lap record by a full 20 seconds. To add an extra layer of something-or-other, it wasn’t just any old road-legal R1, it was one that had crash damage that Andy repaired after purchase.

Andy has been living and working at the Nurburgring for years. By 2012, he estimated that he’d already done over 1,000 laps of the Nordschliefe. Since it’s now 2021, and not a lot appears to have changed with regard to Carlile and his love for the ‘Ring, we can only assume he’s done thousands more laps since setting that record almost a decade ago.

If you need a little pick-me-up in video form, look no further than this video of Carlile tackling the Nordschliefe on an R1 in the wet, with full Dunlop wet racing tires. Even if you didn’t know what we’ve just told you about Carlile, his sheer skill and intimate knowledge of both track and bike will become clear pretty quickly as you watch.

How wet is wet? To set the scene, Nurburgring enthusiast site Bridge to Gantry explained that the Nordschliefe basically had buckets of rain pouring down for over an hour prior to this lap. Now, if you’ve watched any type of racing in the wet at all, you’re probably well aware that some parts of the track may be wetter than others.

Even with a solid set of wet-weather race tires fitted, different levels of wetness on track are still going to affect grip. In fact, it could throw a major wrench in your lap if you can’t adapt accordingly. Wet-weather racing lines end up looking quite a bit different from the ones you might take around the same track in the dry, in part because you want to keep your wet tires wet. That’s what they’re made for, after all, and it’s how they’ll function their best.

Anyway, Carlile’s lap shown here was his second in that session. You can see that, indeed, some areas of the track are utterly soaked while others are drying. It’s tricky to manage both, but Carlile managed to keep the entire lap well in hand. Your heart may be in your throat the whole time you watch, but you should definitely watch this anyway.

MotoAmerica Will Not Race At Circuit Of The Americas With MotoGP

Could The Kawasaki Adaptive Pave The Way For Future Models?