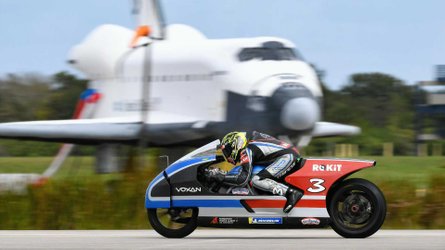 What did you do with your November, 2021? If you’re the Voxan Wattman team, you took your show on the road and headed to Space Florida’s Launch and Landing Facility at the Kennedy Space Center in Florida, U.S. There, you strove to set as many new electric land speed records as you could between November 18 and 23, 2021.

How did it all turn out? As well as the Voxan team could have hoped, but let’s set the scene before we tell you what that means. To do things right, Voxan made sure to stick to Fédération Internationale de Motocyclisme (FIM) regulations. To qualify, a vehicle’s speed is measured from a flying start over a single kilometer, and in opposite directions. Those two runs must be taken within two hours of one another, then averaged to find the final total speed number across the two runs.

Using those rules, on November 22, 2021, the revised Voxan Wattman set a new record in the “partially streamlined electric motorcycle under 300 kilograms” class, at one point reaching a blistering maximum GPS-recorded 470.257 kilometers per hour (or about 292.204 mph). However, when all was said and done, the actual record-setting speed averaged out to 455.737 km/h (or 283.182 mph).

In the run-up to this main event, Voxan also sent a non-streamlined version out on November 21, in an attempt to set the world record for “non-streamlined electric motorcycle under 300 kg.” Using the same rules it would follow the next day, it set a GPS-recorded speed of 369.626 km/h, or about 229.675 mph—also a new world record. Max Biaggi piloted the Voxan Wattman throughout the record-attempt process all six days.

“In less than a year, we have succeeded in lowering the motorcycle’s weight, while increasing its power and improving its stability. Following the records we set in November 2020 in the ‘over 300 kg’ class, these 21 new records are another magnificent reward for the Venturi Group, for Max Biaggi, and for our valued partners, Saft, Michelin, and Mercedes,” Venturi Group president Gildo Pastor said in a statement.

“I am pleased to think that the experience gained from this project will contribute to improving ecomobility. I share these records with my country, Monaco, which does so much to promote sustainable development,” he concluded.