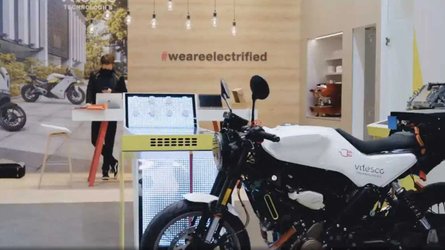 Kawasaki may be the only major motorcycle manufacturer exploring hybrid-electric motorcycle models, but it’s not the only company interested in the technology. German automotive supplier Vitesco Technologies is developing its own hybrid-electric powertrain for two-wheelers. Based on Husqvarna’s Vitpilen 401, the Vitesco system will benefit urban mobility and recently captivated audiences at EICMA 2021.

As a subsidiary of Continental AG, Vitesco Technologies specializes in automotive drivetrains. The brand adapts innovations developed for four-wheeled vehicles to motorcycles with its Vitpilen 401 project. Touting a liquid-cooled, 390cc, single-cylinder engine, the Vitpilen pumps out 44 horsepower and 27.3 lb-ft of torque. The thumper also yields 85 mpg in the city, but Vitesco wants to improve that figure with its new hybrid powertrain.

Featuring a 48V electric motor, the system will stretch the hybrid Husqvarna’s legs even further. The additional motor outputs 15 kW (20 horsepower), which is more than enough power for urban environments. On the open road, the Vitpilen’s internal combustion engine will still produce 44 horsepower, but the firm still needs to develop a seamless transition between the two powertrains.

Drawing on its automotive knowledge, Vitesco equips the Vitpilen 401 with an alternator and generator actuator. A chain drive connects the 48V motor to the final drive, but developing an automated transition to the electric motor is Vitesco’s next hurdle. The team still has to figure out how the electric powertain activates and supports the internal combustion engine. Vitesco is also analyzing the system’s power regeneration capabilities and whether it can sustain operation without aid from the 390cc single.

Of course, the project’s aim is to reduce CO2 emissions, and Vitesco believes the hybrid-electric powertrain will benefit Asian countries the most. For now, the brand will need to figure out its automated transmission before adapting the system to other models. However, it’s exciting to see aftermarket specialists, not just major manufacturers, bringing their ideas to the table.