Vinales Is Hitting His Stride With Aprilia In Misano Practice 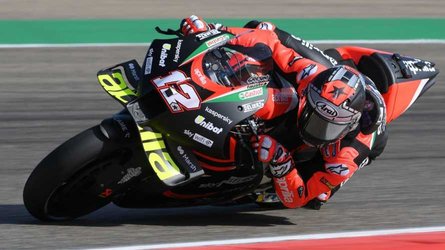 Vinales ended up getting the best time of the day during the free practice session. After getting the top spot in the timesheets, the weather took a turn for the worse and rain started to pour on the track for the rest of the day. No other racer could get a better time than Vinales in practice, allowing the Spaniard to take the top spot for the start of the race.

You might have heard of the drama that unfolded involving Yamaha and Vinales on that fateful race weekend earlier in the third quarter of 2021. The allegations only soured Vinales’ relationship with Yamaha, causing him to end his contract and start anew with the Italian manufacturer, Aprilia.

Now sporting the red and black of the Italian brand’s race team, the Spaniard’s second weekend with the brand is proving to be quite the change of pace as Vinales mentions in his statements following the practice session.

Vinales went on record stating: “what I feel is that I can work in many more areas that I couldn’t before, and this will help me to be more comfortable on the bike and above all to be more consistent, which is what I want to do and what I was aiming for before.” He also mentions that he and the Aprilia team will be trying a few other things to see if he can go even faster.

When asked about other things like seeing his name on top of the timesheets and getting better in braking and corner entry, Vinales remained stoic in stating that he continues to learn and that he had a bit of an adjustment period following his transfer to Aprilia.

Compared to Vinales’ first outing with Aprilia in the Aragon GP, he stated that “[he] was feeling like a rookie that had never rode a MotoGP bike,” and that he needed to use different lines. “In Misano, it seems that this is much easier because I  already understand how to go with this bike in this track. I can anticipate a few moves, I can correct a few things,” Vinales added.

So far so good Aprilia I suppose. Vinales is keeping a very positive attitude with his new team. He’s open to a lot of room for improvement and maintaining his attitude heading into the next few races in the season.