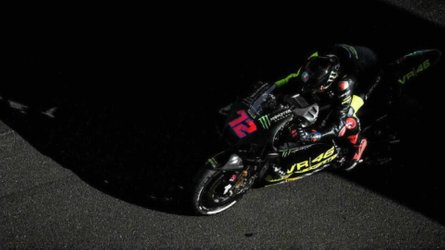 The Doctor may have retired from MotoGP in 2021, but 2022 is a new year with new challenges. Thanks to Italian proximity banking and payments pioneer company Mooney, Valentino Rossi’s VR46 Racing Team now officially has a title sponsor for its 2022 season. Mooney VR46 Racing Team is the official name, and both MotoGP and Moto2 are in the plans for the upcoming racing season.

It’s not clear what happened behind the scenes, but talk of an Aramco sponsorship for VR46 Racing Team in 2021 failed to materialize. Instead, Mooney stepped up to the plate, and will appear on all the things you’d associate with a title sponsor, including bike liveries, race suits, and marketing materials.

“I am happy to have at our side from the upcoming season an Italian company like Mooney, leader in the field of proximity payments and with we share the strategy of developing the young Italian talents together with the research for a constant improvement in the performance,” team owner Valentino Rossi said in a statement.

“Mooney, in addition to being the Title Sponsor of our Team in the MotoGP and Moto2 World Championship, will also join us the VR46 Riders Academy and in my first four wheels racing season,” he added.

“Linking the name of Mooney to such a prestigious brand as VR46 Racing Team is a real declaration of intent for our company which confirms itself as a protagonist in the field of payments and mobility services. Speed, safety, innovation and the ability to adapt to the constantly evolving customer needs are common values shared by Mooney and VR46 Racing Team, which brings the Italian excellence, talent and technology around the world in some of the most competitive contexts of the sport,” Mooney CEO Emilio Petrone’s statement concluded.

Hauling U.K. Bikes To And From E.U. Brings Surprise Fines For Riders

Danilo Petrucci Headed to MotoAmerica for the 2022 Season?