Valentino Rossi Takes Us On A Tour Of VR46 Headquarters 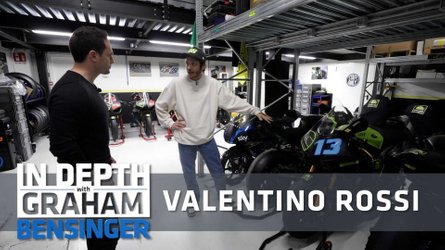 In 2022, Valentino Rossi won’t line up on a Grand Prix grid for the first time in 26 years. While The Doctor retried from his day job in 2021, he’s keeping busy with the GT World Challenge Europe and a baby girl on the way in 2022. Vale may have new endeavors on the horizon but he remains the head honcho at his VR46 company and Rider Academy.

Following Rossi’s retirement in November, 2021, Emmy award-winning journalist Graham Bensinger visited the nine-time world champion at his home in Tavullia, Italy. Number 46 gave Bensinger the full tour, opening the gates to his Moto Ranch complex and the doors to his Ristorante Pizzeria Da Rossi. Of course, the trip wouldn’t be complete without a peek behind the curtain at the VR46 headquarters.

Bensinger and Rossi start out in the most important section of the warehouse—the motorcycle garage. From Ohvale minibikes to Ducati Panigale V4 S superbikes, the VR46 Riders Academy stable includes all the tools and toys needed for Grand Prix racers to stay at the top of their game.

While the bikes certainly provide enough eye candy for the viewer, Bensinger uses the tour as an opportunity to probe into Vale’s excitement and anxiety of racing his half-brother Luca Marini this past season. The duo also delves into Rossi’s injury-plagued 2010 season after discussing the top speed achieved by the VR46 training bikes. These little glimpses into The Doctor’s psyche are bright spots of the tour, but the VR46 merchandising empire remains the main event.

With 100 employees, 300-400 shipments per day, and 250 new products per year, VR46 is a lucrative enterprise for the recently retired MotoGP legend. The brand is so successful, that it has started handling merchandising for select Formula 1 as well. As expected, running such a profitable and prolific company requires ample attention. Luckily, Rossi has more time than ever. Despite leaving the MotoGP paddock, we have a feeling that Vale will be plenty busy in retirement.

Semiconductor Shortage To Persist Finds US Department Of Commerce