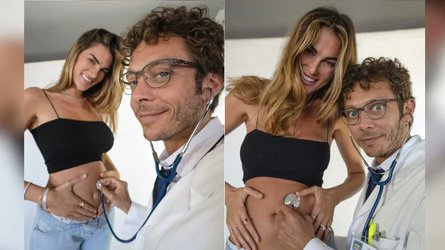 On August 5, 2021, Valentino Rossi officially announced that he would retire from MotoGP at the end of the season. As you may have witnessed and can no doubt imagine, it was an extremely emotional time for Rossi and the entire MotoGP paddock—not to mention his fans all around the world. Beyond his racing talent, Rossi has done so much for the sport over the course of his career.

After everyone had a chance to digest the news, naturally people started talking about what would come next. There’s VR46 academy, not to mention the VR46 racing team that will line up the MotoGP grid for the first time in 2022. Will Vale do some DTM racing? Maybe.

However, on August 18, 2021, at least one possibility became a reality when the Doctor officially announced that he’s about to become a father for the first time. Rossi and partner Francesca Sofia Novello made the announcement via a series of extremely cute photographs on Rossi’s Instagram.

The caption in English reads, “After a careful visit we can tell you that Franci is pregnant! We are waiting for a girl.” Now, just because your dad’s a multiple world-champion level motorcycle racer doesn’t mean you have to follow in his footsteps. Still, we’d bet that young Valentina Rossi can get some great training at the VR46 academy in the future if she wants it.

It’s an exciting time for Rossi, his partner, and their family. We look forward to seeing what the Doctor does in the future, and wish him and his family all the best. Life, like racing, doesn’t slow down—it speeds up, and you just have to learn how to ride it and make sure you’re wearing the right equipment. It may be the end of an era—but it’s also the beginning of something completely new.