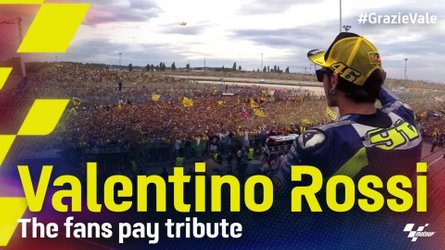 Valentino Rossi’s magical Grand Prix career comes to a close at the final race of the 2021 season in Valencia, Spain. After 26 years in the World Championship, Rossi has captured 9 world titles, 117 wins, and 235 podiums. His impact goes beyond statistics, though. Vale’s entertaining riding style, magnetic charisma, and zany celebrations captivated audiences worldwide.

“I have the bikes at home except the Hondas,” Rossi admitted. “I have the Aprilias and Yamahas in my house. The 2004 model is in my bedroom. Every morning when I wake up I see the bike, but all together like this is a great emotion.”

After Rossi reunited with his title-winning steeds, a special press conference gave the media and fans a final chance to interact with The Doctor on the MotoGP stage. Live video calls with fans and retrospective media questions sent viewers down memory lane, but a supercut of the Doctor’s career highlights and fan reactions summed up his illustrious 26-year career.

Now, the Doctor takes the track for his last rodeo at the Valencia Grand Prix. Rossi will line up on the grid for his final race on Sunday, November 14, 2021. He may be done with his historic MotoGP career, but Vale will take his talents and magnetic charisma to another racetrack soon.