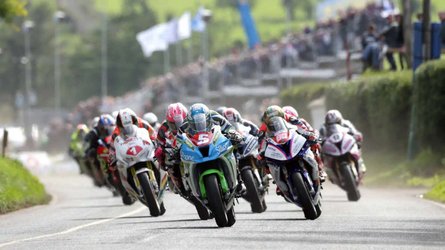 It’s no secret that the past two years have been a rough time for motorcycle racing events. Just how rough it’s been varies widely by event, as well as by series. Massive international undertakings like MotoGP and World Superbike have had an easier time making things work than smaller one-off races like Macau, the Isle of Man TT, or the Ulster Grand Prix.

While the Isle of Man TT is arguably the world’s best-known motorcycle road race, the Ulster GP is among the planet’s oldest road races. In fact, it’s about to celebrate 100 years of racing in 2022—and part of that is absolutely due to Mervyn Whyte.

The man stepped down in October 2020 from serving as the North West 200’s event director for 20 years, after having been involved to varying degrees for decades before that. However, he then stepped back up to the plate to save the Ulster GP in 2021, this time by forming a new company with Northern Irish road racing legend Philip McCallen. Together, Whyte and McCallen’s company raised two million pounds to ensure the North West 200 and Ulster Grand Prix will continue to operate in 2022.

Although the pandemic certainly didn’t help matters, the Ulster Grand Prix was facing financial difficulties as far back as 2019, well before that virus reshaped the world as we know it. At the time, former organizers the Dundrod and District Motorcycle Club found themselves in about £300,000 of debt.

The event was canceled for the past two years, which perhaps doesn’t sound so weird given the state of the world. Earlier in 2021, the DDMC entered what’s called a Company Voluntary Arrangement with its creditors. This allows them to pay back the debts owed over a certain fixed period of time, rather than having to pay it all back at once.

Rewinding to the 2019 Ulster Grand Prix, where Peter Hickman neatly swept a seven-race victory over the course of two days, the cracks were already beginning to show. The club, as it happens, was unable to pay out the prize money it promised to winners at the 2019 Ulster GP—leaving Hickman and others totally unpaid.

Earlier in 2021, Hickman said he’d love to come back to the Ulster GP, where he set an insanely fast 136 mph lap record in 2019. However, he said that the racers need to be paid what they’re owed, as well as guaranteed prize money for the next race if they’re to return.

The Ulster GP’s future remains uncertain, but it does look a bit more solid than it previously had since Whyte and McCallen joined forces to rescue it. Here’s hoping they’re able to right the ship, and that the public health situation is more conducive to safely holding well-attended road racing events going forward.