Home » Articles » Twenty Not Out: A Honda XR100 two decades in the making
Articles

Twenty Not Out: A Honda XR100 two decades in the making 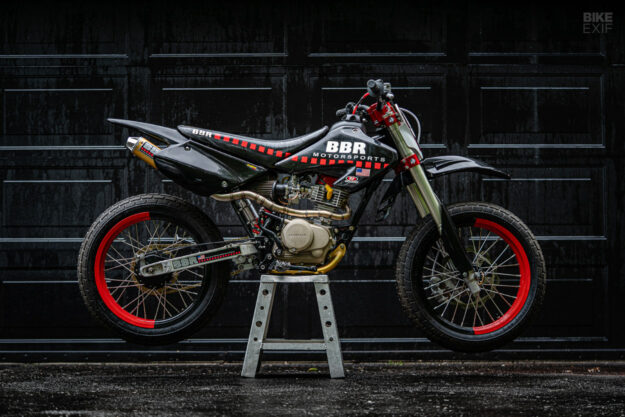 Most bikes we feature are built over the course of a few weeks. Some take months, or maybe a couple of years. But this tiny XR100, despite its diminutive size, has been two whole decades in the making.

It’s owned by photographer Gregor Halenda, who is a regular on these pages. He’s part of Team Incomplete, famous for its BMW boxer, and also helped to build an amazing two-wheel-drive KTM for the apparel brand REV’IT! 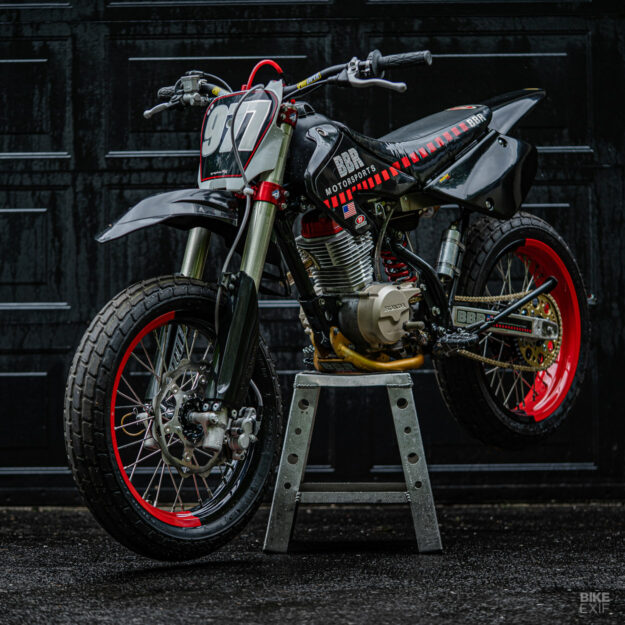 The story goes back to the tail end of the twentieth century. “It started with a stock 1998 XR100 I picked up after attending one of the first American Supercamps. My road racing teammates all got XR100s as well, and after a day of racing our RS125s on the track, we’d toss a few cones into the parking lot and keep racing into the night.” 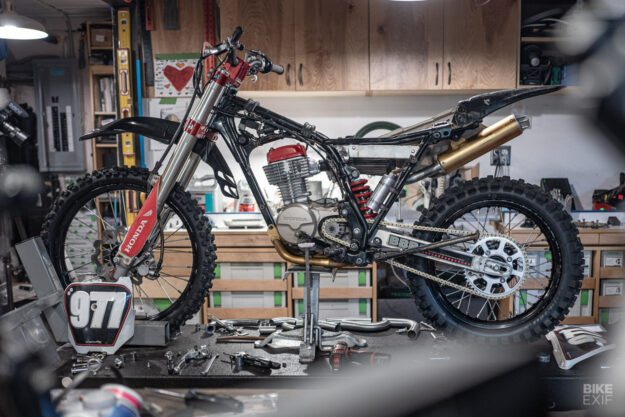 As racers do, Gregor and his friends began modifying their mini bikes to gain advantage. “Many of the mods on this XR100, like the Takegawa 120cc kit, were done almost 20 years ago.”

Over the years Gregor has also installed an ignition and lightweight rotor setup from Takegawa, plus a Mikuni 28mm flat slide carb with a custom machined intake and K&N filter. Gases exit via a full custom tapered stainless exhaust system, with a modified silencer from the Washington State specialist BBR Motorsports. 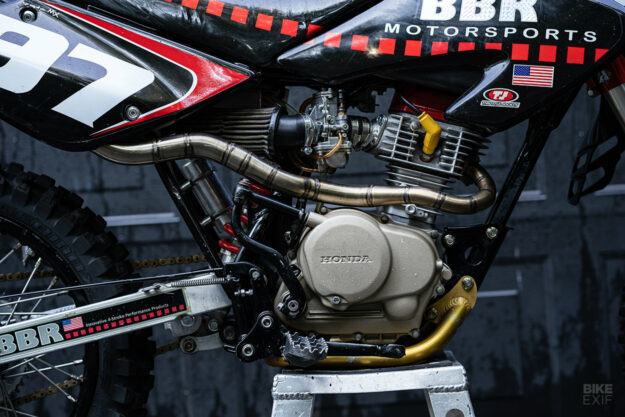 BBR also supplied a swingarm—the product on which they built their reputation—and a TIG welded 6061 aluminum engine frame cradle, which protects the motor and prevents frame twisting.

Greg also modified and braced the frame elsewhere to take the plastics and tank from a small CRF. (The BBR decals are new-old-stock, from around 2004.) 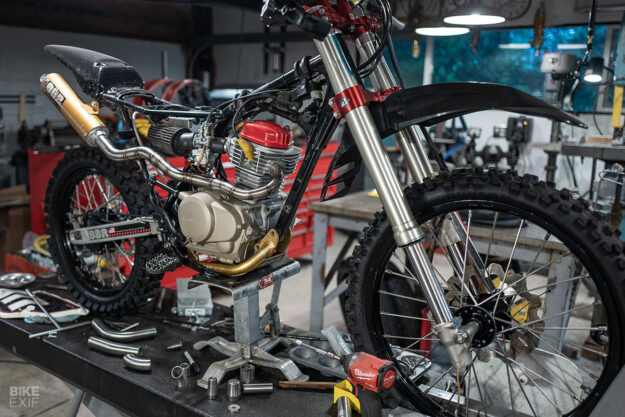 This mini dirt bike now rides like a grown-up motocrosser thanks to the forks (and front hub) from a CR85. They’re shortened to match the rear ride height, and slotted into an Applied Racing billet triple clamp. There’s also a custom turned aluminum steering stem and smooth-turning tapered steering head bearings, plus beefy ProTaper bars in a flat track bend fitted with Spider Grips.

To give you an idea of how seriously Gregor takes this XR100, he has two wheel and brake setups. For supermoto, he runs 17-inch Excel rims front and back, plus a CR250 front brake with an oversize Galfer floating rotor. Tires are Maxxis DTR flat trackers. 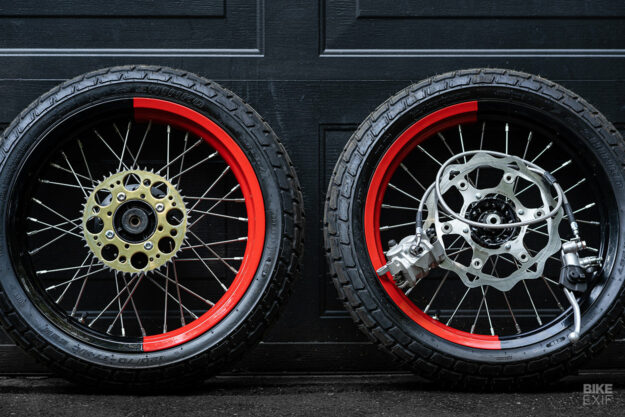 For dirt, Gregor switches to another set of Excel rims, but in F19/16 sizes, with a CR85 brake and Galfer wave rotor.

Most recently he’s rebuilt the wheels, steering head and swingarm pivots. One thing led to another and the bike was fully stripped and powder coated, and new plastics fitted. “The exhaust had also rusted, after a few trips to the Bonneville Salt Flats, so I made a new one with advice from local tuning shop Baisley High Performance.” 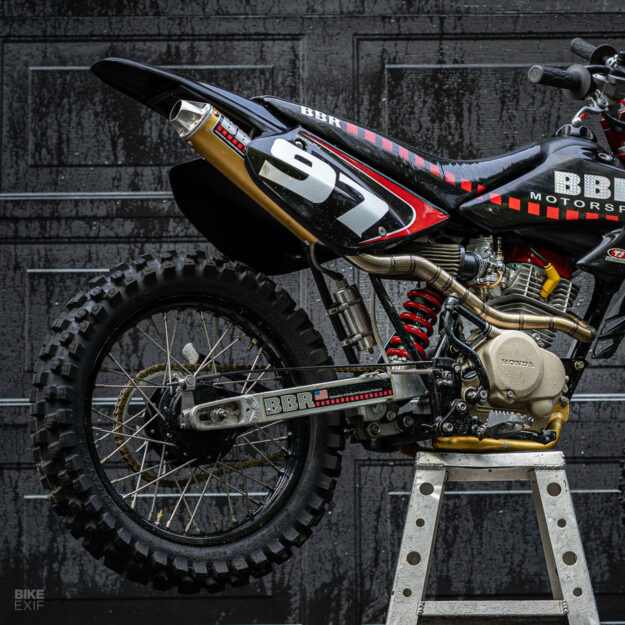 “I stripped out the insides of the original BBR exhaust, rebuilt the core with stainless perf tubing and new machined inserts, then repacked the whole thing for a nice deep sound—as deep as a 120cc mini can have!”

Gregor has flogged his XR100 in supermoto, flat tracked it, ice raced it on the Hudson River in New York, and even used it in a six-hour endurance race. “It is probably one of the most important bikes in my life; it’s taught me so much about every kind of riding.” 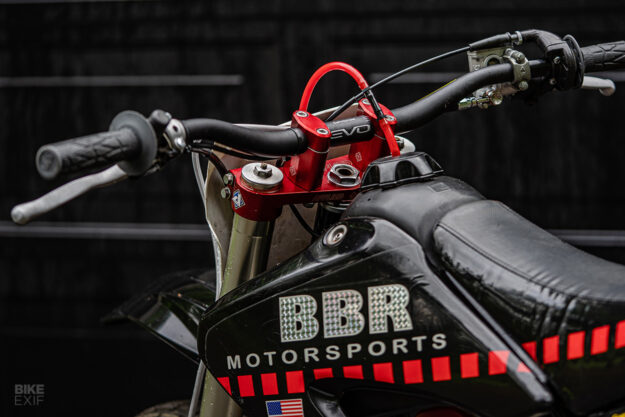 “That’s the advantage of minis: they are ‘low consequence’ bikes,” he points out. “It’s much easier to learn to back a bike in at 15 mph than at 115 mph—but the physics are exactly the same.”

The little Honda will now be one of the bikes that Gregor uses on Saku-Moto adventure tours. Notably, it’ll be getting thrashed around a dry lake bed in eastern Oregon for lessons on flat track technique. But in deference to its age and size, it’ll get the next day off—when the big adventure bikes are sliding around deserts and mountain ranges. 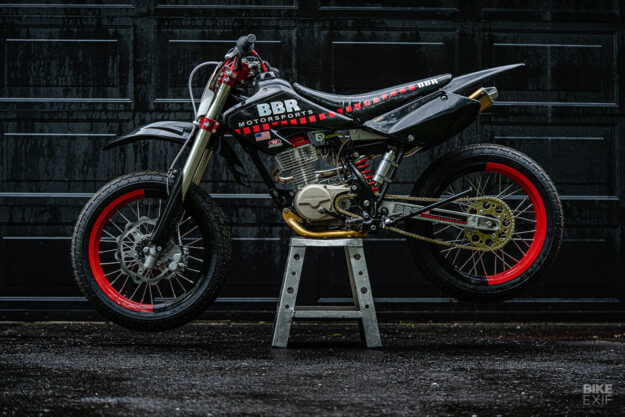 “This bike will stay in the family, and eventually my sister will pass it on to my daughter and the circle of learning will continue,” says Gregor. “No other bike in the world will teach you as much as a well set up mini.”

If you’re within shouting distance of eastern Oregon, check out Gregor’s adventure offerings on the Saku-Moto website. The next trip is in October, and it sounds like our kind of fun—with the bonus of getting a ride on this pocket rocket too. 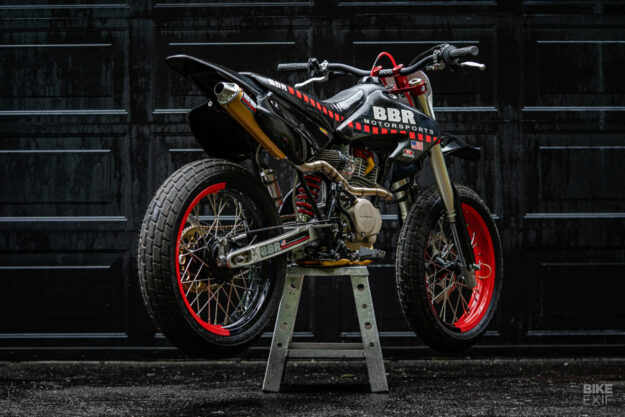 Take A Look Inside An Arai Testing Facility With Jonathan Rea