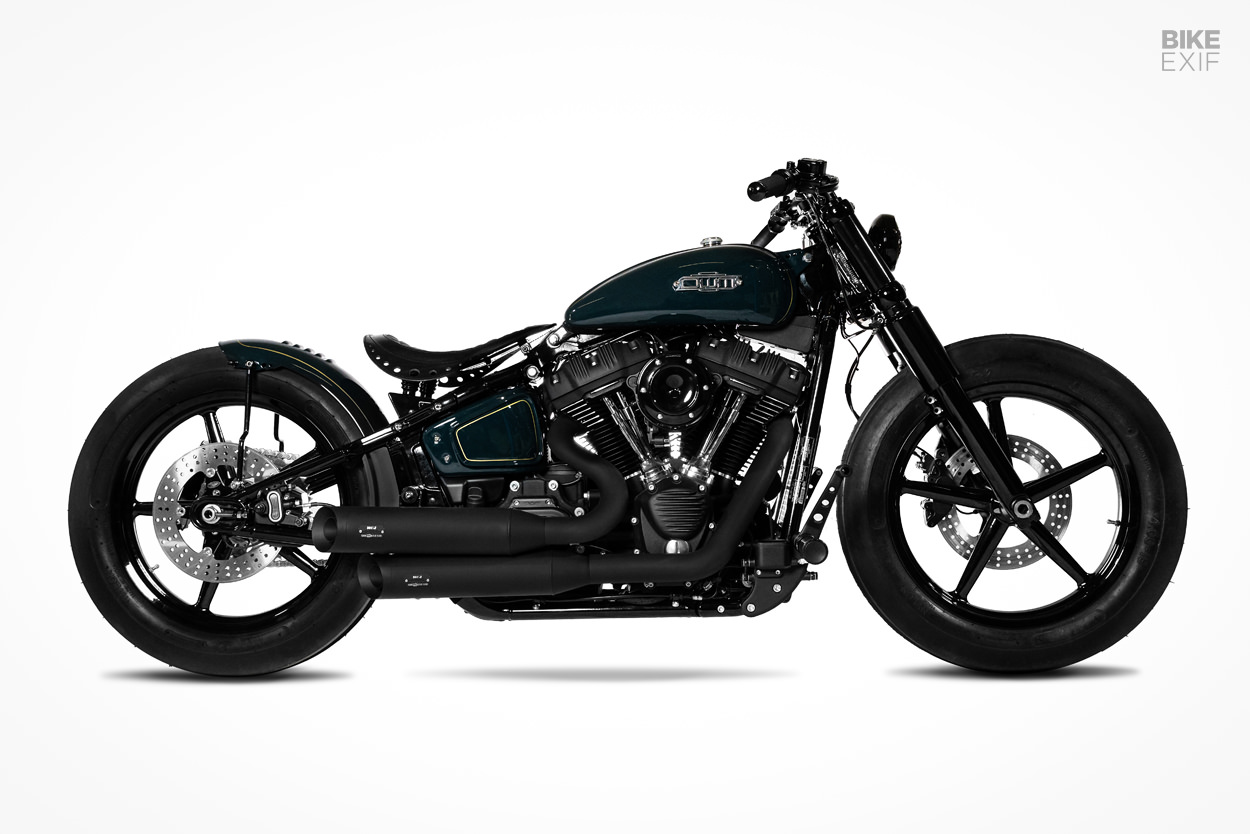 Julian von Oheimb has been customizing Harley-Davidsons for ten years as One Way Machine, and is a regular fixture on the podium at AMD World Championships. But the German builder has a proclivity for older machines, and has never worked on a donor newer than 15 years old. Until now, that is.

One Way Machine’s 10th anniversary build is based on a zero mile 2020-model Harley-Davidson Street Bob, powered by a 107 ci Milwaukee Eight motor. But even though it’s a modern Harley, Julian still managed to add his signature style to it. 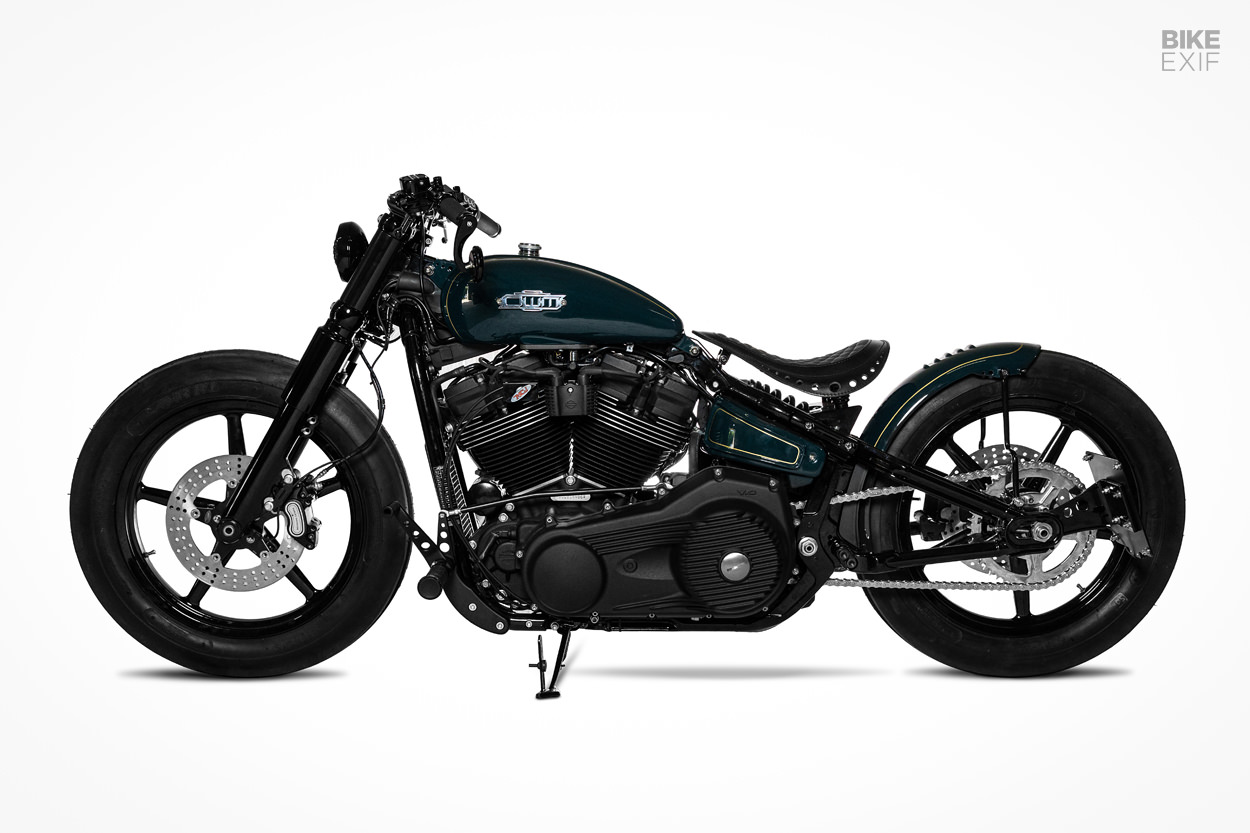 This was a new experience for both him and his customer. Based in Transylvania, the bike’s new owner already had three One Way Machine builds in his garage—but they were all older bikes. “He had a desire for a new vehicle with Milwaukee Eight power,” says Julian.

After a little back and forth, the client settled on the Street Bob as a base, and signed off on the concept Julian was pitching. He had one specific request though: he wanted it painted in a vibrant color. And that’s not One Way Machine’s vibe. 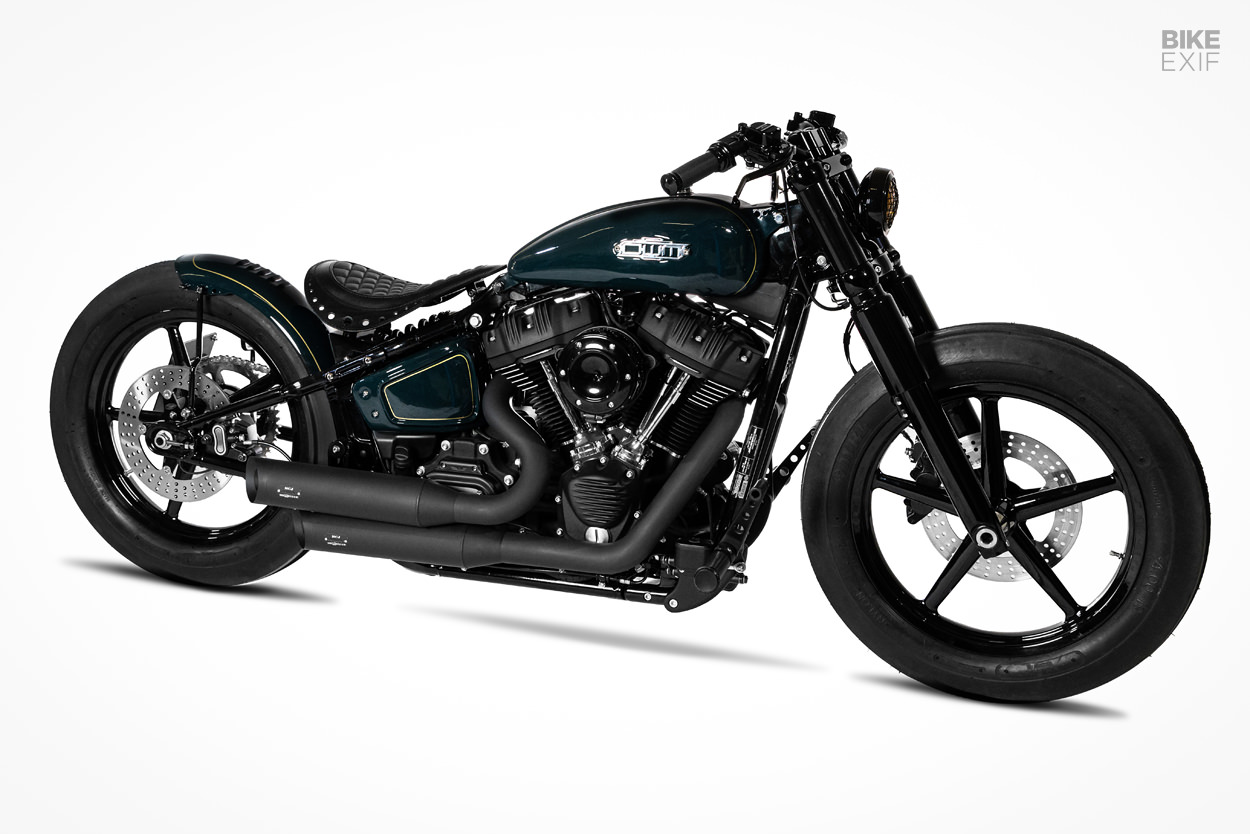 With a clear plan ahead, Julian stripped the bike down and began working his magic. Julian’s specialty is making clunky Harleys look tight and cohesive, and this Street Bob is no different. But the biggest visual hit here is the 19” wheel set. 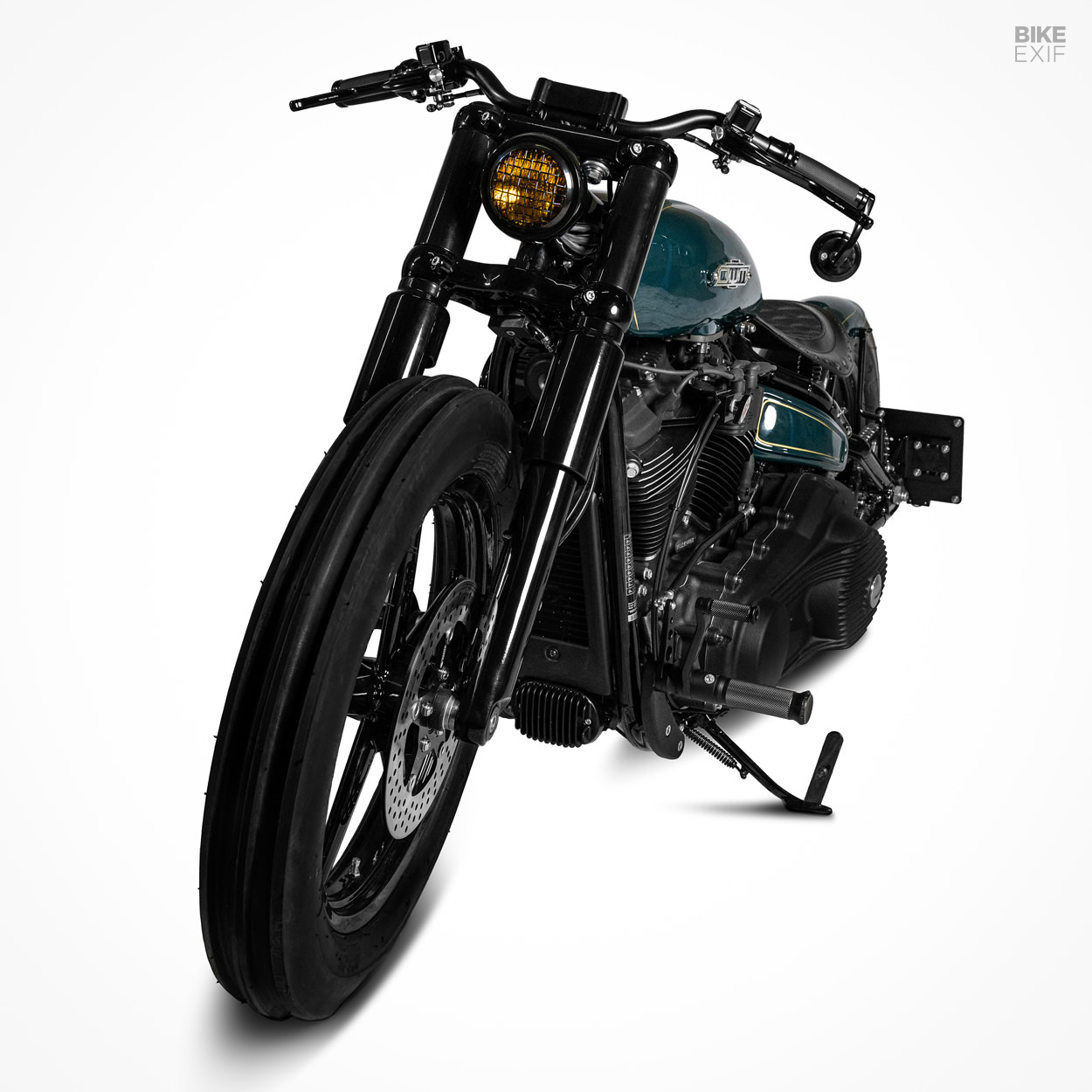 Julian sourced a pair of Harley Rocker C front wheels online, then set about grafting them to the newer bike. The front end didn’t cause too many headaches, but the rear was far from a straight swap, since there wasn’t enough space for the 19” hoop. To avoid the look of a stretched swingarm, Julian simply lengthened the axle mounts to create more space. 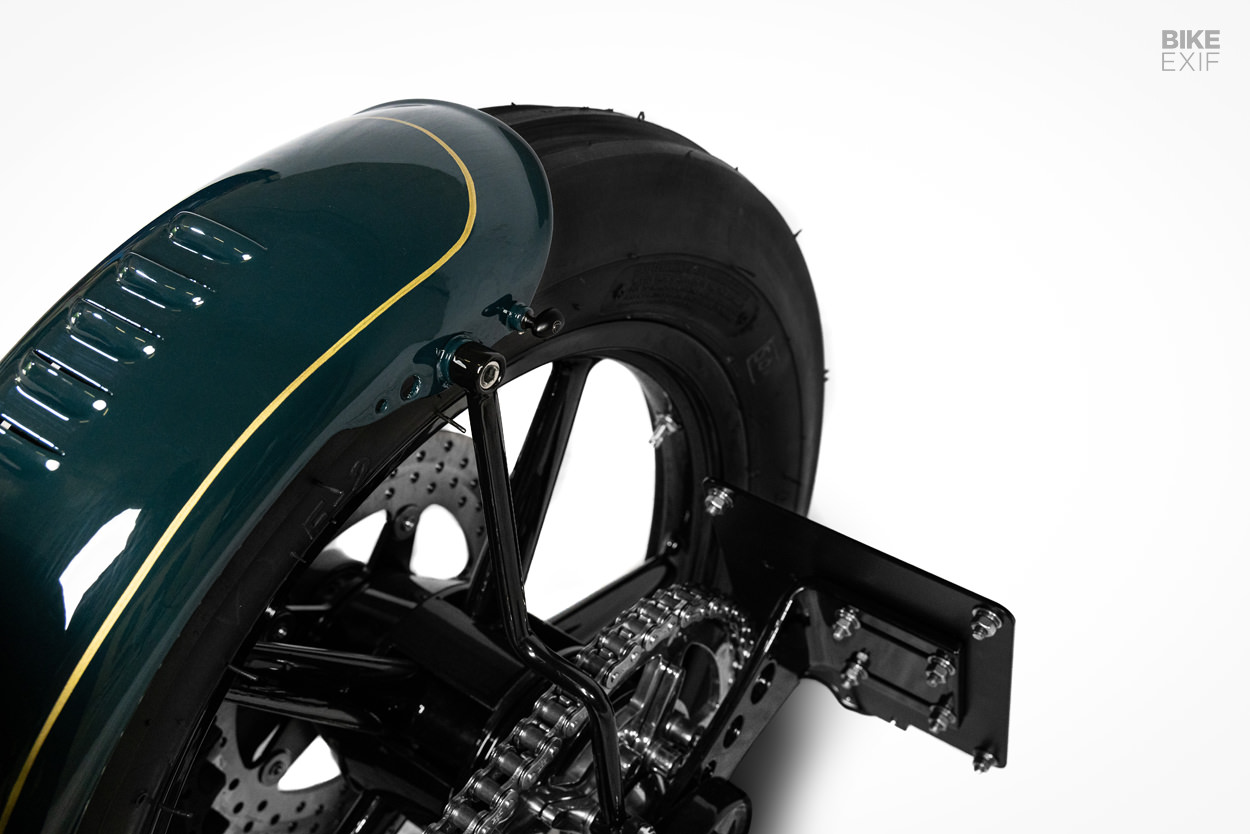 Since he was working with a front wheel at the back, there was also nowhere to mount a sprocket to—so a whole new hub had to be fabricated. The Street Bob now runs with a chain instead of a belt, using a custom-made sprocket. And the stock brakes have been upgraded with Zodiac discs.

Julian also lowered the front forks, and installed a new rear shock from Müller Motorcycles. Together with the new wheels, it’s given the Harley a squat, purposeful stance. 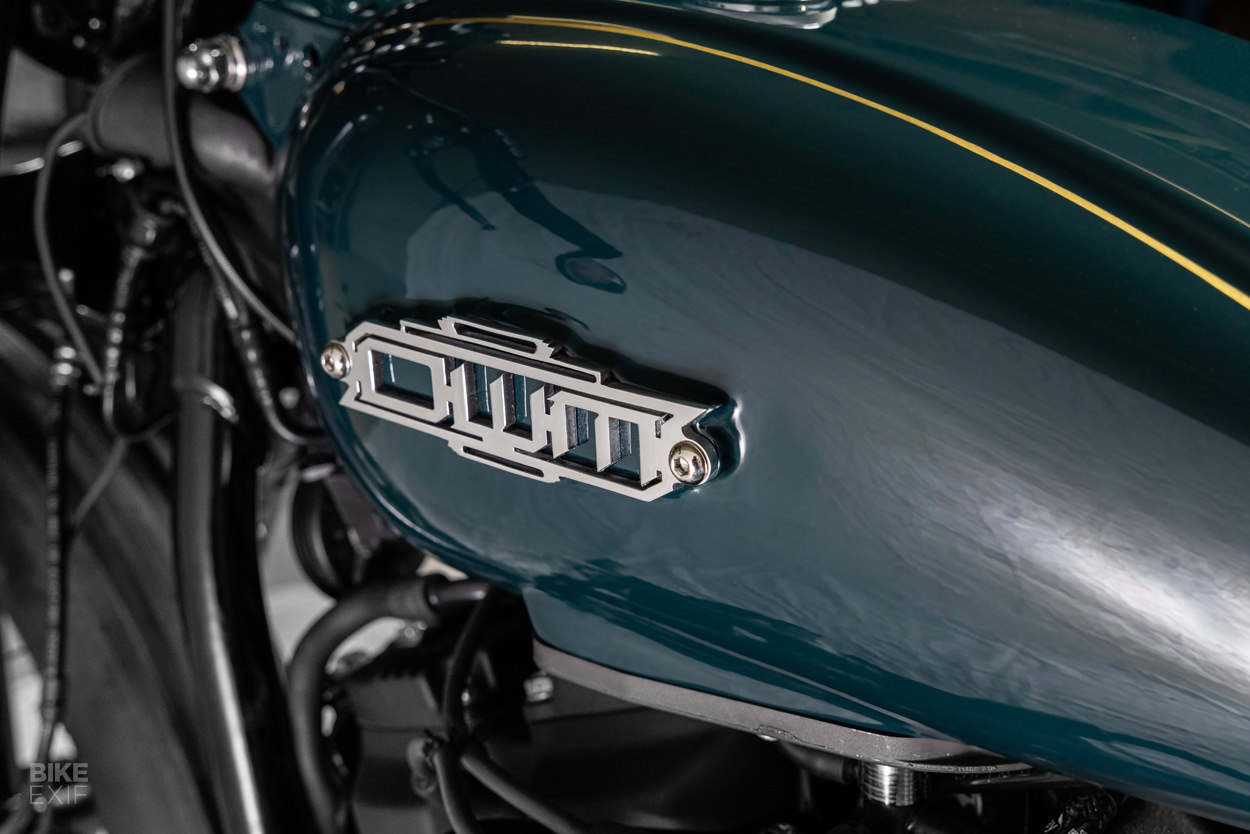 Up top is the fuel tank from a vintage East German AWO motorcycle, modified to fit the modern Harley. It’s dressed with a Kustom Tech gas cap, with a 10th anniversary motif engraved by Carsten Estermann. Custom OWM badges add a hint of branding without screaming for attention.

Just behind it is a saddle in One Way Machine’s signature style, with upholstery from Spirit Leather. There’s a custom blank-off plate beneath it to protect the wiring, with a pair of struts that look like classic seat springs from afar. 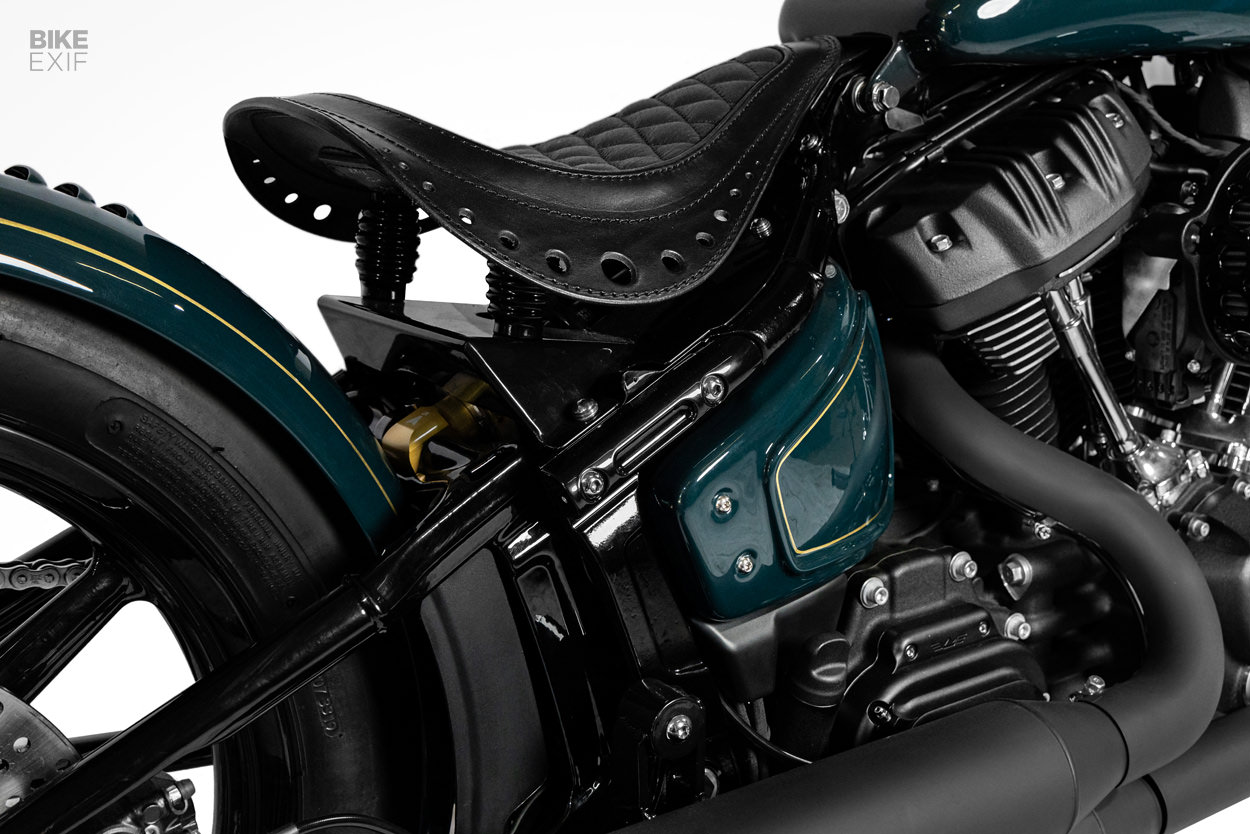 The rear fender originally came from Chop-It, but Julian modded it extensively. It’s mounted on a pair of one-off braces, with a side-mounted license plate bracket doing duty on the left. The stock oil tank is still in play and the forks are sleeved, but that’s it for the bodywork otherwise.

The rest of the build is a well-planned recipe of bolt-on bits. The air filter and forward foot controls are from Thunderbike, and the finned engine covers are from EMD. 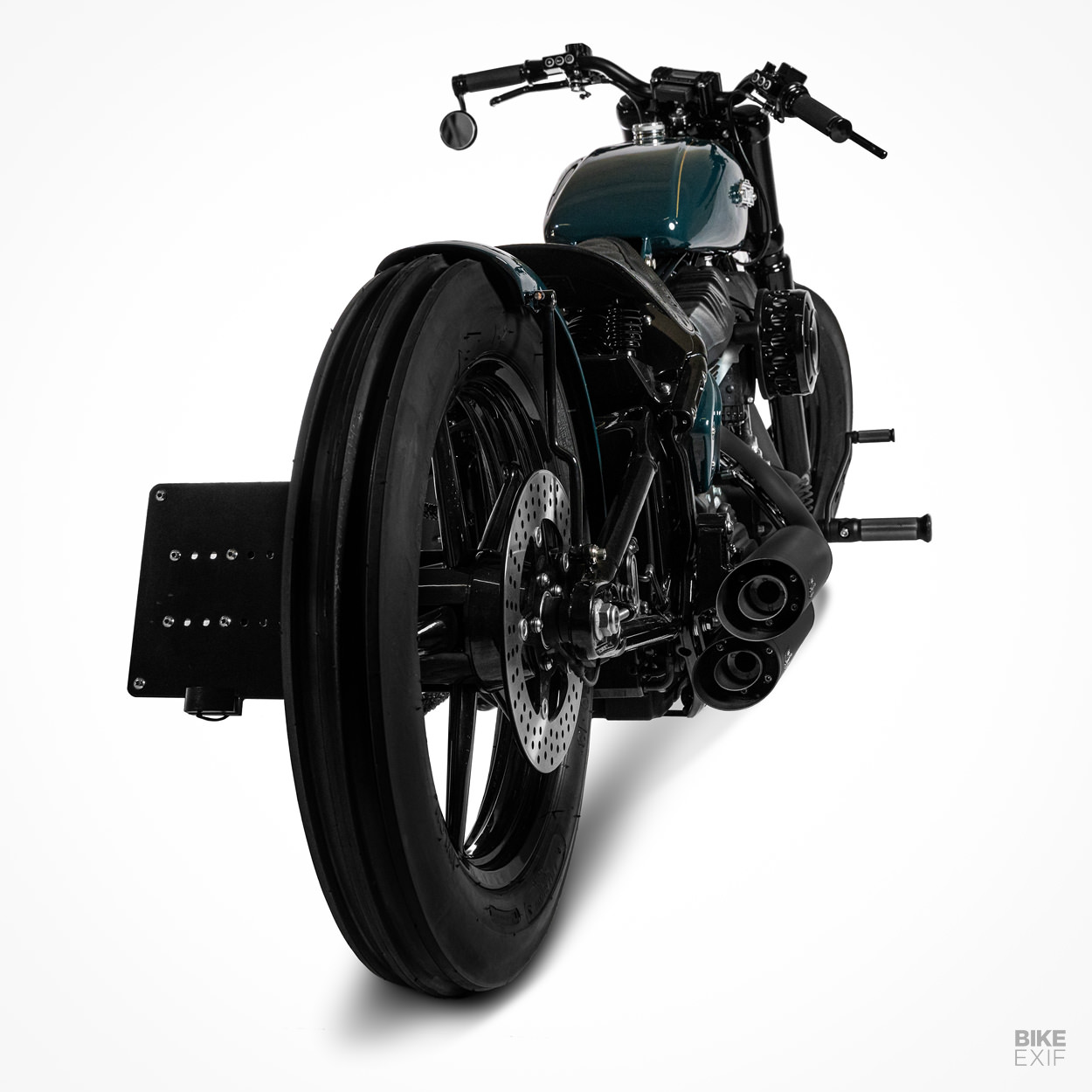 The mufflers are from MCJ in Italy, and include flaps to dampen the sound when you don’t want to upset Johnny Law. (A lever on the left side of the engine opens and closes them.)

Julian also installed a hydraulic clutch, and fabricated a new set of handlebars for the bike. The turn signals are Kellermann units, and the levers and switchgear are from Rebuffini; a plug and play system for Harley’s CAN bus. Julian kept the Street Bob’s tiny handlebar-mounted speedo, but repacked it in an aftermarket housing from Rough Crafts. 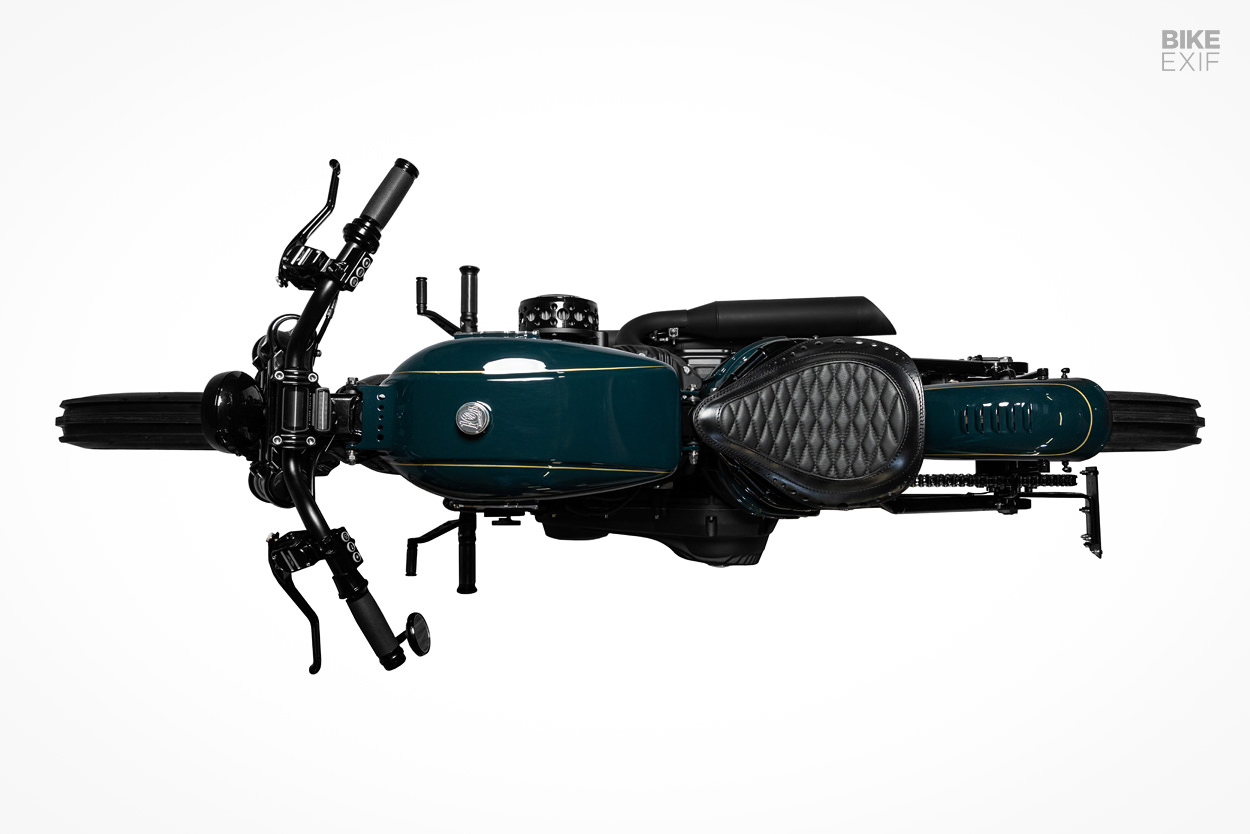 BK-Lack GmbH executed the classy paint job, with striping by Chikos Pinstriping. Like everything else on this build it’s tasteful, subtle and extremely effective. Julian might have gone outside his comfort zone this time around, but it certainly didn’t hamper him. 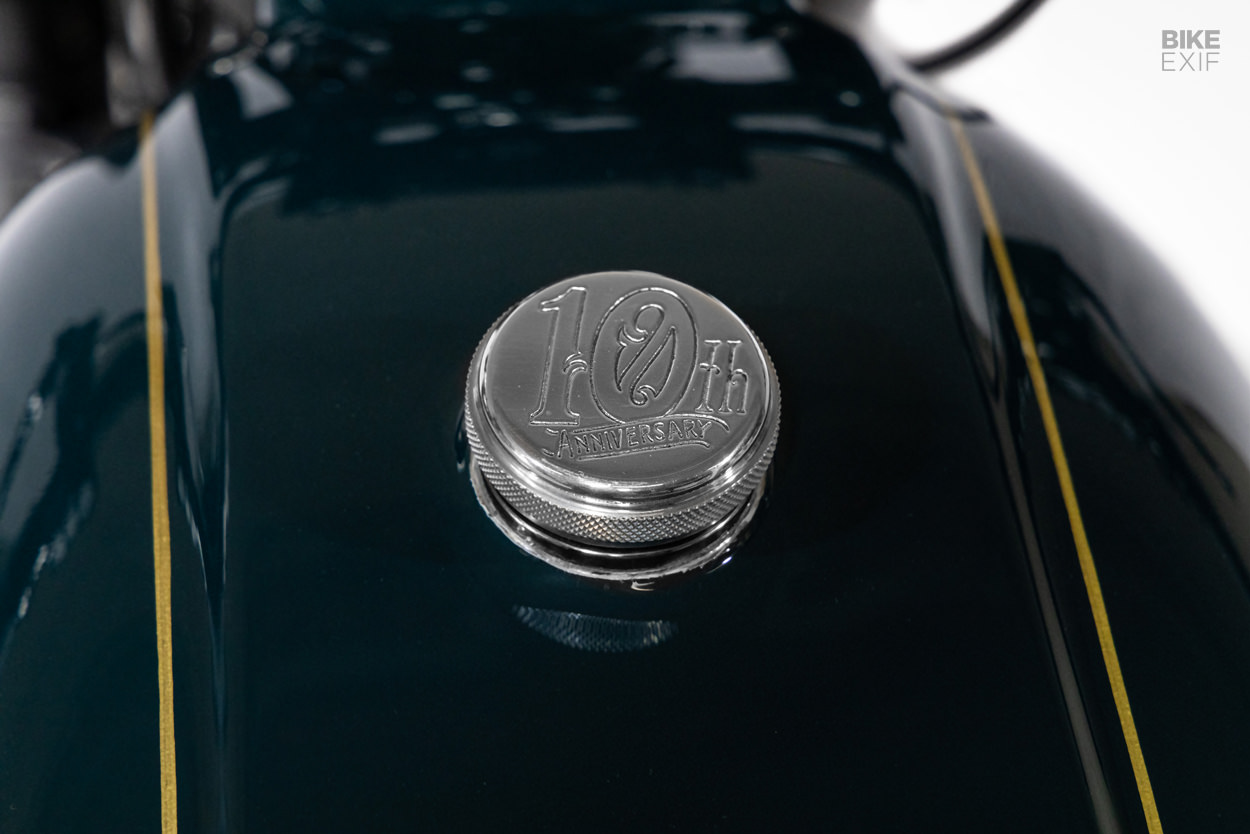