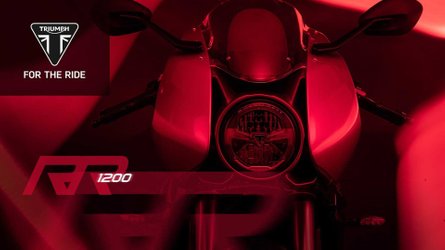 The traditional recipe for a street-going naked bike includes ripping the fairings off an existing sportbike model, lowering the foot pegs, and mounting a set of handlebars. However, several manufacturers have flipped the script in 2021. Yamaha replaced its R6 supersport platform with the MT-07-based R7 and KTM derived its limited-edition RC 8C from the 890 Duke model.

Now, Triumph will pull the same reverse engineering trick when it officially unveils the faired Speed Triple 1200 RR on September 14, 2021. While we’re less than a week away from the bid day, the brand’s hype machine is working in overdrive. The most recent video opens on elements previously revealed in the original teaser. The single, round headlight marks a new design element for the platform. However, Hinckley retains the naked bike’s fuel tank and tail styling.

The most noteworthy moment of the new trailer starts at the 29-second mark when a lone rider powers the Speed Triple 1200 RR along an empty track. Still obscured by Triumph’s low-lit filming, the scene marks the first time we’ve seen a full picture of the upcoming sportbike. Triumph isn’t just using its YouTube channel to drum up interest though, its Instagram page also highlights the finer details behind the RR.

Launched on September 7, 2021, a new multi-picture post gives us a better look at the Speed Triple RR’s cockpit. Clip-ons and fairing-mounted mirrors adhere to the sportbike aesthetic, but we wouldn’t be surprised if raised foot pegs made an appearance as well. While it’s easy to speculate on the ergonomics, we’re unsure if Triumph will change anything under the bodywork.

Overhauled for 2021, the Speed Triple 1200 RS sharpened Hinckley’s hypernaked to modern-day standards with a displacement bump to 1,160cc, 177 horsepower, and a 22-pound weight loss. Those are still potent figures by today’s sportbike standards. If the engine goes unchanged, the Speed Triple 1200 RS may not stand up to the Ducati Panigale V4, Yamaha R1M, or BMW S 1000 RR, but should still qualify as a lethal track weapon.

Until Triumph releases the final details, however, we’ll have to wait and see if the latest naked bike-turned-sportbike delivers.