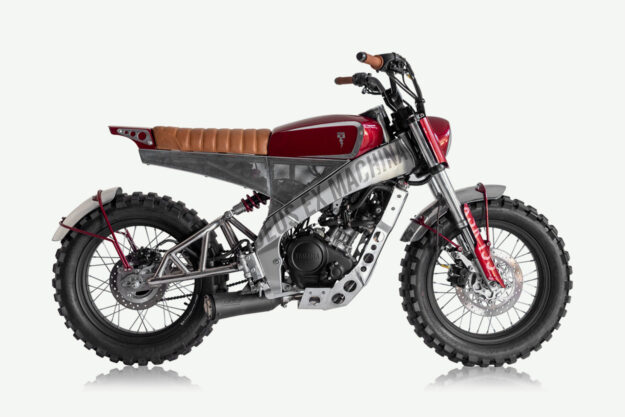 For nine years now, Yamaha’s ‘Yard Built’ program has set the benchmark for manufacturer-sponsored custom projects. We’ve covered it right from the beginning, since the reveal of the Wrenchmonkees’ MonkeeFist XJR1300. There must be some 50 or more builds since, but it wasn’t until the XSR155 was released that Yamaha opened up the program to Asia.

The newest XSR is obviously smaller and more affordable than its bigger brothers, which helps mass-market sales in Asia. Launched at the tail end of 2019, the XSR155 is based on the MT-15—which means it has a rev-happy 155cc liquid-cooled SOHC four-valve engine. The rest of the spec sheet is pretty good—it includes USD forks, a slipper clutch and six-speed ‘box, LED lighting and digital instrumentation. 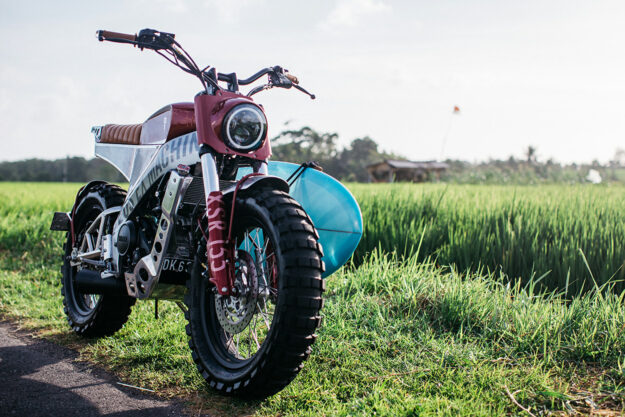 The frame is Yamaha’s ‘Deltabox’ layout though, which might be great for handling but isn’t so good for ease of modification or visual appeal. But despite that, the Yard Built program has now trickled down to Bali, the Island of the Gods, which is home to Deus’ Indonesian garage—or bengkel, to use the local parlance.

Before handing the XSR155 over to the Deus crew, Yamaha put two stipulations on the build: don’t touch the Delta frame, and don’t touch the engine. The rest, as you can see, was fair game. 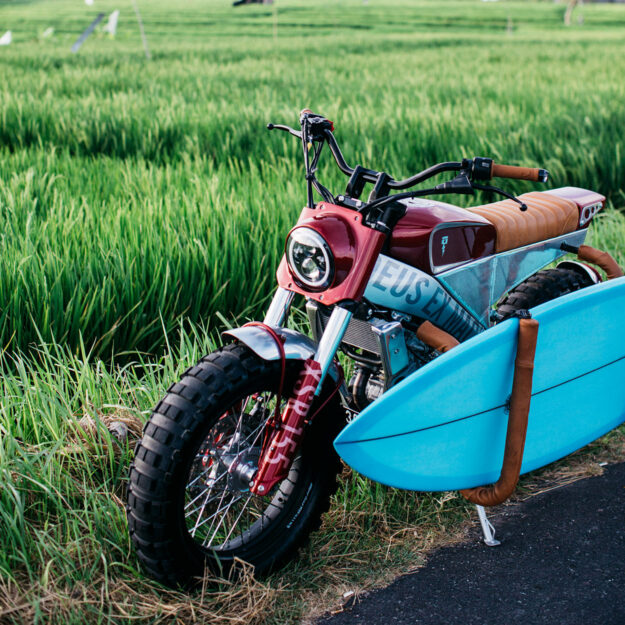 “Before we did anything, we checked out the builds that had come before,” says Anthony ‘Ano’ McInerheney, Deus Bali’s design head. “Yard Built has already happened in Jakarta, and we didn’t want to repeat anything.”

This XSR155 has been designed as a ‘go anywhere’ machine, Bali-style. “We wanted our bike to reflect true usage—what we do, day in and day out. So it needed to carry us to the beach for a pre-work surf. Head home after, strip off the racks and go into the office. At nights we might pull on a shirt and head into town for a dinner for two.” 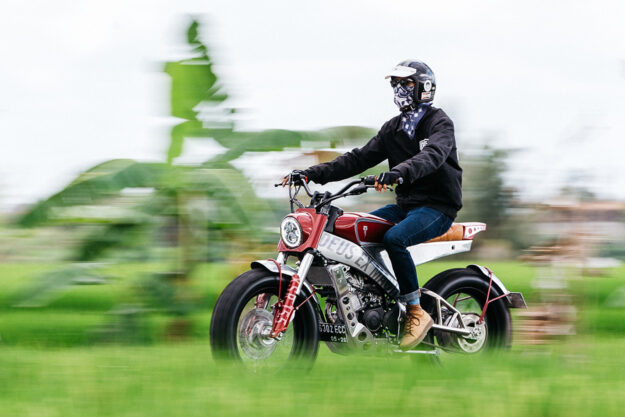 Deus have chosen the name Aka-Tombo, Japanese for ‘Red Dragonfly,’ as a homage to the first bike Yamaha made back in 1955—the YA-1. “We referenced it again when choosing the deep red for the bodywork,” says Ano, “but the similarities stop there. Our build is visually quite big and heavy, and tall too.”

Deus have removed a lot of what comes standard, from the fuel tank cover and fuel cell to the plastic side panels, fenders, and bash plate. The shape of the swingarm was wrong for the big, tough stance too: “We came up with one made from stainless tubing,” says Ano. “It helps reduce the visual weight around the back wheel, and highlights the cantilevered tan leather seat and the hand-made tail. We wanted a bike that looks badass and rides great. Who doesn’t?” 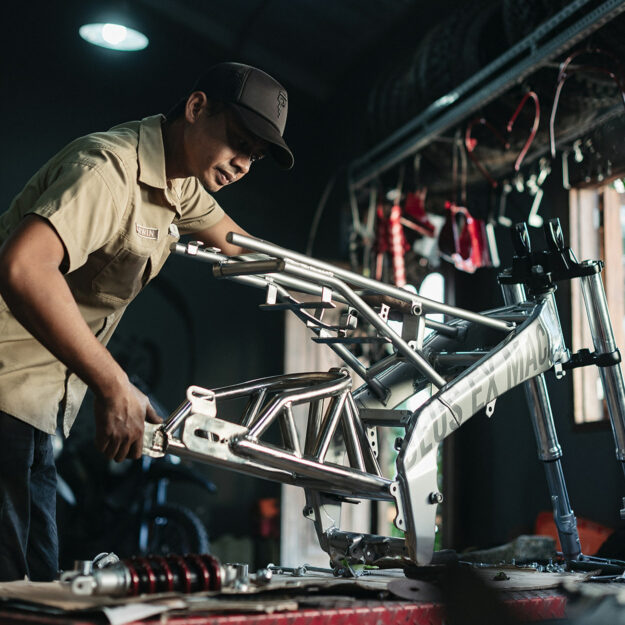 Hand-built metal bodywork is an Indonesian national specialty, and the Bengkel boys Arwin and Koko rose to the occasion. “This build has allowed us to showcase their work—they are the real heroes here.”

Everything is hand forged from stainless or aluminum, with even some plastic in the tail. “Their tools are rudimentary: an English wheel and a big old block of ironwood that they hammer sheet out on,” says Ano. “We’re talking fenders, fork guards, and the bash plate and radiator side covers—which are one big piece.” 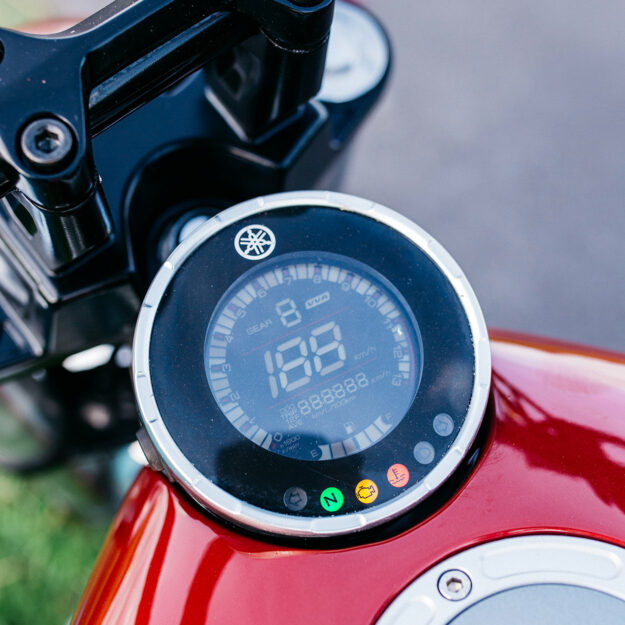 The stock speedo was relocated in front of the new tank—designed to accommodate the factory fuel pump and lockable cap—and the bars have been replaced with Japanese Hurricane tracker bars. They’re trimmed down a tad, and furnished with Biltwell grips.

The wheel size has been upped to 18 inches, with VND billet alloy hubs front and back laced up in-house to Sprint XD alloy rims, 3.5 inches wide. The forks are raised 20 mm, with a little more oil added for stiffness. 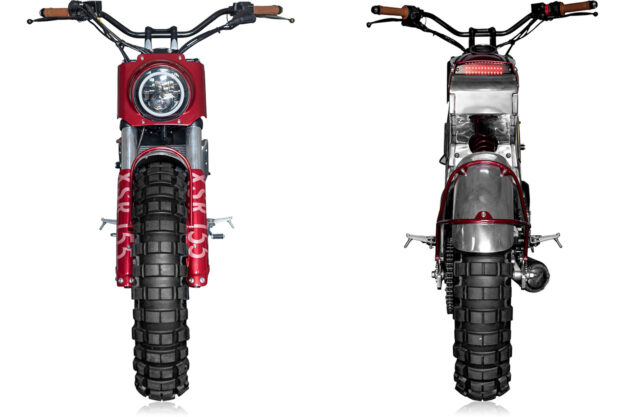 Deus have also stripped off the anodized finish on the forks to bring them back to the polish, and fitted a slightly softer spring to the rear monoshock.

The effect is to make the bike feel more balanced in the rough stuff, with the help of grippy Pirelli Scorpion Rally tires—which also increase the ride height still further. 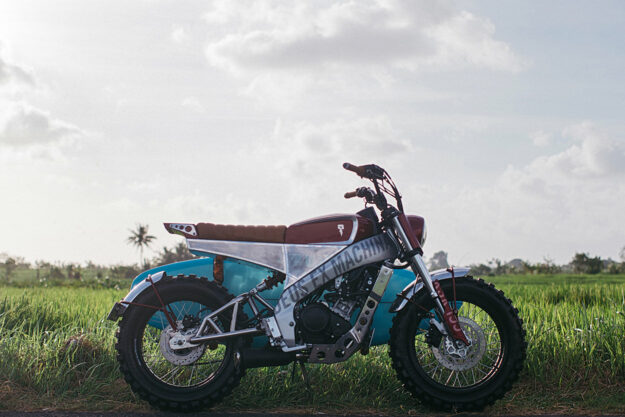 “The extra height the 18s gave us meant we could also sling a SuperTrapp Shorty muffler underneath,” says Ano. “It’s a warm, rich sound that is nowhere near offensive.” 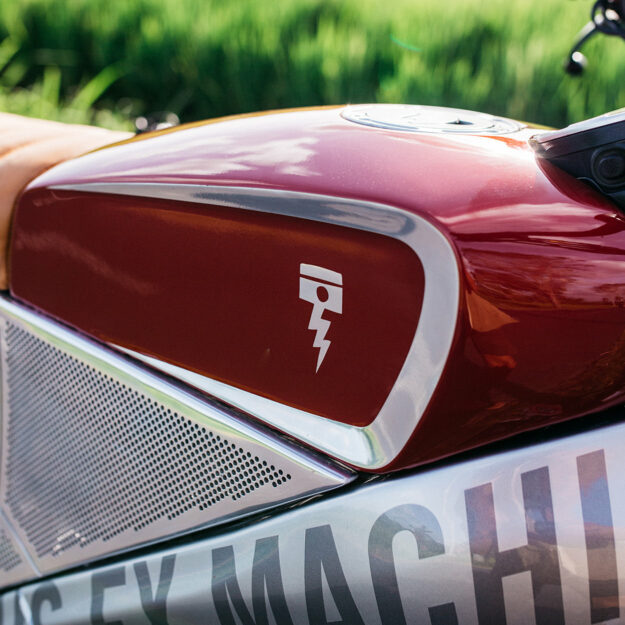 There was a bit of machine help in the build, with the perforated side panels. After cutting aluminum plates to fit, using cardboard templates, Deus had them CNC drilled for a mesh effect. It keeps the emphasis on the blocky Deltabox frame, which is highlighted further with Deus branding along both sides.

The brutal, mechanical feel of this build is highlighted by the paint, with shades of silver and grey on the hard parts and a Mitsubishi ‘Rally Red’ for the tank, fenders and headlight cowl. Rohin, Deus’ in-house spray guy, also dropped a few coats of high sheen clear across the top of everything. 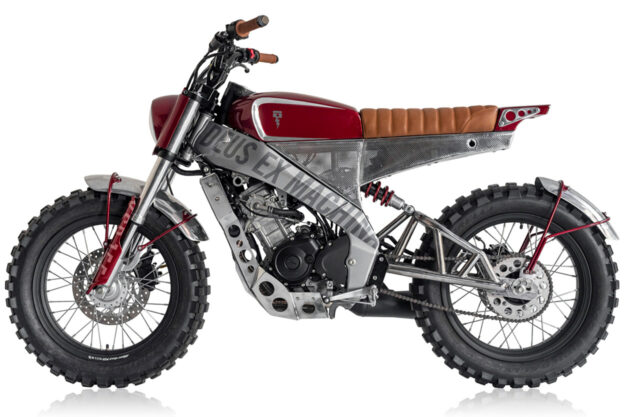 As part of the deal with Yamaha, Deus get to keep the XSR155 at their Temple of Enthusiasm—but can’t sell it. “It becomes one of our shop bikes now,” says Ano.

It doesn’t sound like he has a problem with that, funnily enough. And neither would we. 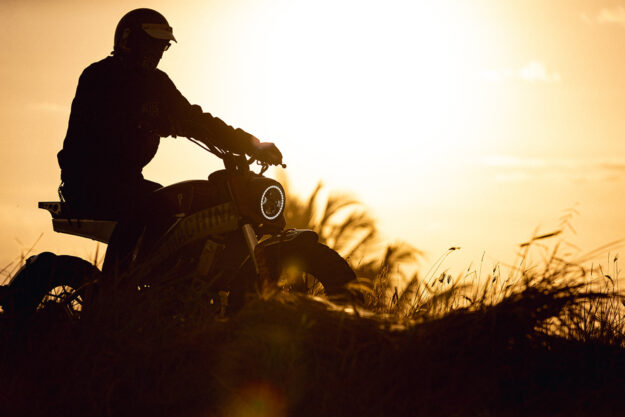 Royal Enfield the standout for August as UK motorcycle ...