Three Buddies Embark On A Ride Across Europe Against Child Abuse 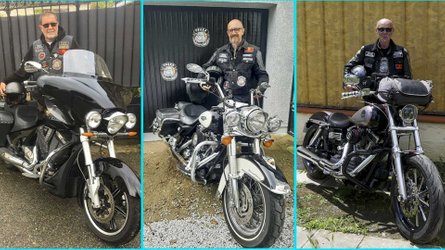 The Urban Bulldogs Against Kids Abuse (UBAKA) is an international organization of motorcycle riders who have one common goal: to put an end to child abuse. Truly, a very sad reality faced by families all across the world, child abuse comes in many shapes and forms, and can so easily slip past the radar. It is UBAKA’s goal to bring all this to light, raise awareness for, and ultimately put a stop to all forms of child abuse.

Some concrete examples of UBAKA’s community service consist in events, talks, and even direct intervention initiatives in partnership with several schools. Another initiative being taken by the organization is a long-distance ride across Europe, with the goal of carrying the organization’s message across Europe, as well as to encourage others to proactively put a stop to child abuse.

The three riders, who are members of UBAKA in France are Fafi, Lolo, and Chris, cruiser enthusiasts who will travers the continent and pass through a total of 13 countries and 19 borders for a good cause. The journey will cover a distance of a staggering 8,700 miles, and will start in Toulouse, France, and take them all the way to Tbilisi, Georgia. To get there, the trio will pilot their Harley-Davidson Road King, Harley-Davidson Dyna Street Bob, and Victory Cross Roads through Italy, Slovenia, Croatia, Serbia, Romania, Bulgaria, Turkey, Georgia, Armenia, Greece, Albania, Montenegro, and Bosnia-Herzegovina.

The trio expect the journey to last a total of two months, with the intent of taking it slow in order to enjoy the roads, sceneries, and of course, meet hundreds of new people along the way. Fafi, Lolo, and Chris took off on Sunday, August 29, from Trémouille, near Toulouse in France.

Three Buddies Embark On A Ride Across Europe Against Child Abuse

Evoke Electric Motorcycles Gearing Up To Set Up Shop In Spain