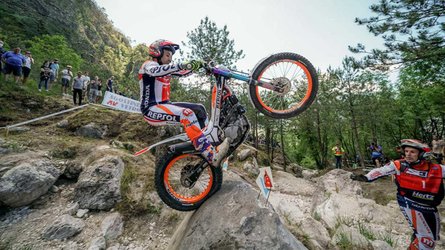 At ten-year-old Toni Bou witnessed Spanish rider Marc Colomer claim the 1996 Trial World Championship ahead of trials legends Dougie Lampkin and Jordi Tarres. Three years later, Bou took his first step toward his dream by capturing the 1999 Catalan Cadet Trials Championship. The promising rider followed up that early success by winning the 2001 Spanish Junior Trials Champion and making his debut in the 2003 World Trials series at the age of 16.

However, on the world stage, Bou didn’t shoot to the top of the field until 2007, when he won both the Indoor and Outdoor World Trials Championships. Once Repsol Montesa rider attained the number 1 plate, he hasn’t surrendered his position at the top of the sport, winning every outdoor and Indoor (now TrialGP and X-Trial) Trials crown between 2008-2021.

That’s 30 world titles in all, but Bou isn’t showing any signs of slowing down, even training on a Honda Africa Twin and in the snow to stay ahead of his rivals. While Bou readies himself for yet another championship run in 2022, the Box Repsol team felt it was the appropriate time to enjoy a look back at what got the Spanish rider to this point.

Halfway through the video, Bou reflects on the milestones of his career, from entering the World Championship to securing his 30th world title. However, the video’s most awe-inspiring visuals aren’t found in the archival footage, they’re found earlier in the film when Bou shows everyone that he still has what it takes to dominate the sport.

From boulder hopping to hill climbing, from wheelies to stoppies, the Trials legend puts his skill on full display. Despite the technical difficulty of all the maneuvers, Bou makes it look easy with a seamless, fluid style. Only during the slow-motion scenes can we truly comprehend and appreciate the body and bike control required to pull off such feats.

The 35-year-old Spanish rider may have come a long way in the past 25 years, but if his skill and drive are any indications, he isn’t going anywhere any time soon.