This Nifty Gadget Reminds You To Turn Your Indicators Off 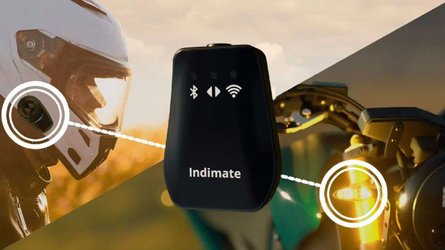 It’s a pet peeve among motorcyclists and non-motorcyclists alike. You’re cruising along the freeway when a motorcyclist passes you with their blinkers on. You anticipate that they’ll merge into your lane, so you slow down to give way. Lo and behold, nothing happens, and they continue going straight, blissfully unaware that they’ve left their turn signals on. Let’s face it, it happens even to the best of us.

Now, premium machines come with self-cancelling turn signals—nifty tech, but certainly, not everyone can afford these top-shelf machines. Nicolas Rogers, a motorcycle rider and electronics student, created Indimate, a device that links to your bluetooth intercom system and reminds you to turn off your blinkers after a turn. The mechanism is simple: when the blinker is turned on, it transmits an acoustic signal to the Bluetooth unit in the helmet. Of course, this means that you must already be using a Bluetooth speaker or a hands-free system in your helmet.

The loudness, duration, and tone of the indicator signal can then be individually changed via a proprietary smartphone app when used in conjunction with the helmet’s system. The compact Indimate gadget can be mounted anywhere on the motorcycle, although the developer suggests mounting it under the seat to prevent theft.

The device is very straightforward to install; all you have to do is splice a few wires here and there and you’re good to go. The beacon is connected to each indicator by four cables: one on any left indicator, one on any right indicator, one ground, and one on the battery’s positive terminal. Indimate can also act as a Wi-Fi hotspot, allowing users to pair their smartphones. When the blinker is activated, the indicator ticks in the background while you listen to music,make a phone call, or communicate with fellow riders on a group ride.

Nicolas says he’s considering adding a function that adjusts the volume of the turn signal in response to wind noise detected by the phone’s microphone. Additionally, he’s also cooking up a feature that would play a short beep when your phone detects that the bike has finished rounding a corner. In the following months, Nicolas hopes to launch a Kickstarter campaign for pre-orderers. The device is expected to cost around $70 USD, making it an affordable option as opposed to getting a bike with self-cancelling turn signals.