This Guy Is Crafting A 1,000 HP Drag Bike Using A Honda Odyssey Engine 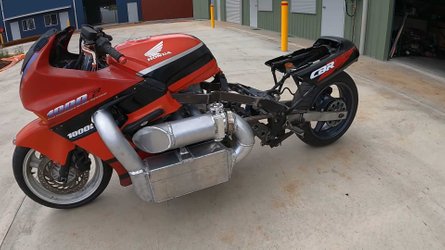 We love a good shed build here at RideApart, especially when it’s the kind of bonkers that puts a giant grin on your face just to contemplate. Today, we have just such a build to acquaint you with. The mad Aussie behind the YouTube channel Snail TV, as you may guess from the name, loves him some turbos. In fact, he loves them so much, that’s even his very good shop dog’s name. That’s why he’s currently working on a mad Honda CBR1000F drag bike build, complete with a turbocharger.

That’s not the magnificently mad part, though. You see, the goal of this bike is to achieve 1,000 horsepower and an as-yet unspecified torque figure. How does Snail TV plan to do this? No big deal, the plan apparently involves stuffing a Honda K24 engine taken from an Odyssey minivan inside the frame. It’s a work in progress, with new videos going up fairly regularly on the Snail TV YouTube channel, and it’s very nearly together as of the January 29, 2022 update.

The first video went up back in November, 2021, and new videos in the series showing Snail TV’s progress have been coming out pretty regularly ever since. For those unfamiliar with the channel, it’s all about engine swaps and mad builds, from the Halfabusa (that’s a Hayabusa-powered go kart) to a K24-powered jet boat.

Building has clearly been a way of life for this guy, long before he decided to put together this YouTube channel and share his creations with the world. You’ll occasionally see recycled parts from previous projects show up for use on the current one, for example—and Snail TV will tell you where the part originated.

What’s the purpose of this build, other than to make us all hear our inner Dr. Ian Malcolm voices in our heads? As you may already have guessed, it’s meant to eventually be a drag bike. Since it’s already so close to completion, could we perhaps get to see it in action before 2022 is out? Only time will tell, but we salute Snail TV and every builder who dreams big and thinks to make videos about it to share with us all.