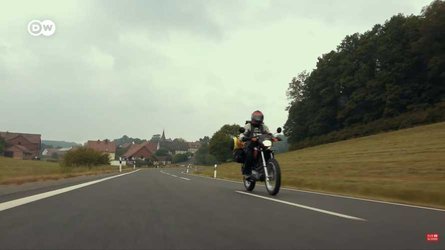 Have you dreamed of doing something bike-related, but find that you just keep putting it off? There’s always a reason, isn’t there? Sometimes it’s a very good one, like being a responsible member of a household and holding up your end of the bargain. Other times, though, it’s because you’ve talked yourself out of doing it. Maybe you tell yourself it’s not the right time, or the right bike, or you’re too old, or a million other things.

That’s why a story like Margot’s is so important. This video shows the first part of this 64-year-old German woman’s trip from her hometown in Germany to Iran. She’s not a seasoned explorer, and she’d never done something like this before. In the three-part series, she and her trusty Honda XR 125 (laden with approximately 40 kg of kit, or nearly 90 pounds of baggage), embarked upon a once-in-a-lifetime journey across the continent.

For the first part of the journey, it’s just Margot, her bike, and her helmet-mounted action camera. Luckily, the weather was pretty good. Apart from some kind of mishap with the fuel filter before she even left Germany, things went pretty smoothly for the most part. Once in Germany and once just over the border in Poland, she had to call the Auto Club to come help her out—but the important thing is, she got the help she needed and was soon back on the road.

Once she got to Kyrgyzstan, Margot reunited with the DW TV film crew, which produced this video series. It’s a good thing, too, because that’s also right before she planned to cross a mountain pass into Tajikistan that’s roughly 4,000 meters above sea level. Up until that point, the weather had been warm, dry, and mostly quite pleasant. However, the mountain pass was another story altogether.

Red mud, ruts, and incredibly slippery conditions made Margot fall more than once. The XR 125 may not be a large bike, but hauling it back up each time while it’s laden down with everything you need for a multi-month adventure is a lot to ask of anyone. Margot appears quite spry in these videos, but all the conditions taken together would probably be exhausting for anyone. Then, of course, it started sleeting.

The DW film crew was able to help, and even ended up taking Margot’s luggage in their truck at one point, just until she was over the pass. If you’re not questioning your life choices during at least one point in a trip, did you even take it? Seriously, that’s just one of the points where Margot’s journey is extremely relatable.

All three parts of her trip are available to watch on YouTube now. It’s worth sitting back, watching, and making your own plan to make your motorcycle dreams come true—whatever they may be. While Margot did have the help of that film crew, what the film crew also showed is all the kind and lovely local people she met along the way. Total strangers helped her pick up her bike more than once, not just the film crew assigned to record her trip. Some of the views along her path were astonishingly beautiful, too. What untold beauty awaits you in your motorcycling future?

What Happens When You Buy Yourself A 50-Year-Old, One-Mile Bike?