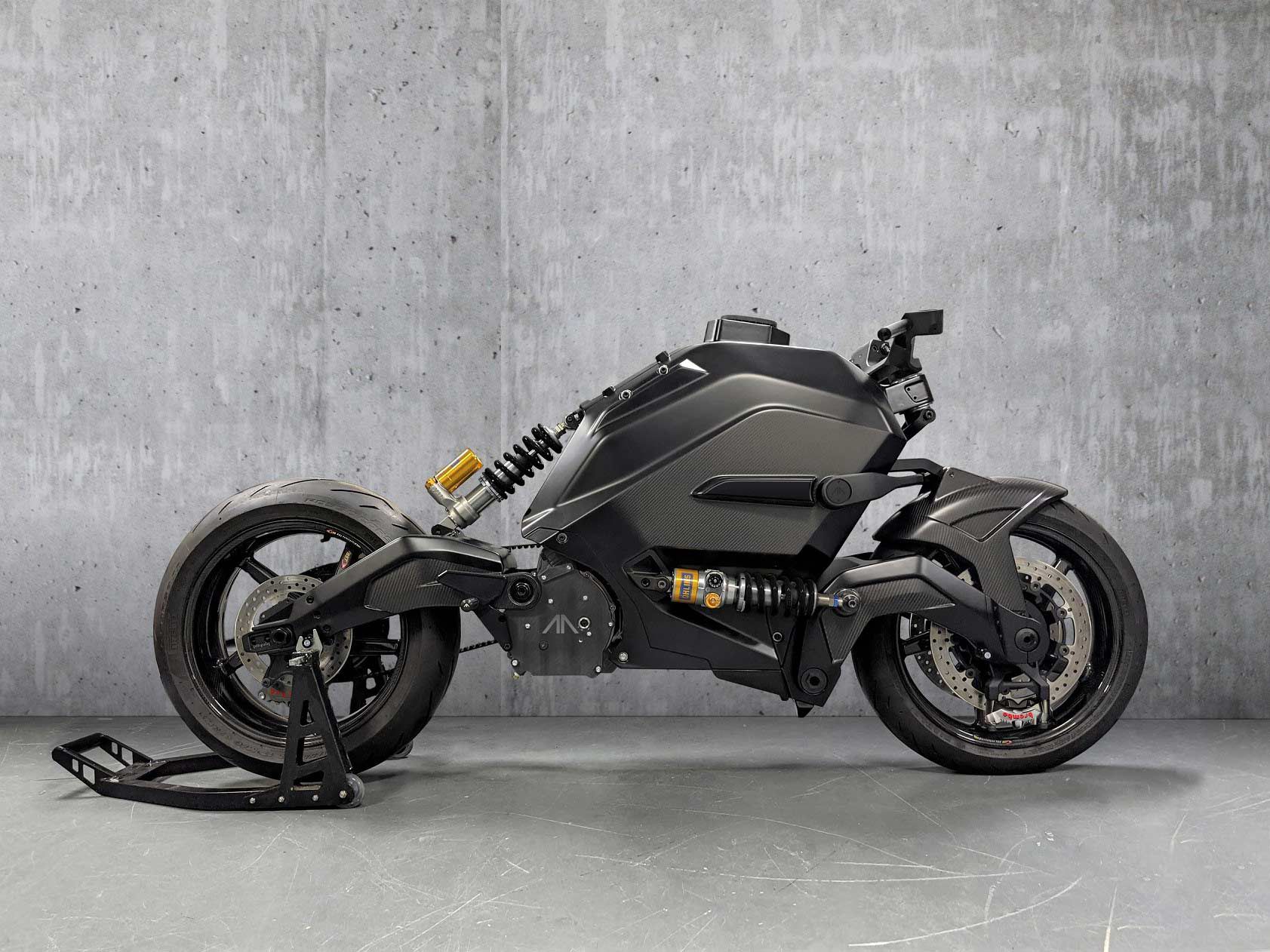 Arc says these images of its updated electric Vector model show that the bike is now production-ready. (Arc Vehicles/)

The Arc Vector first took a bow at the EICMA show back in 2018 and instantly looked like one of the most interesting—and expensive—bikes in a spate of planned electrics that were due to hit the market. Three years on the company has had a rollercoaster ride of a time, including a successful round of crowdfunding followed by a deep trough that saw investors pull out, with the original iteration of the firm going into administration in late 2019. Now, though, Arc is back on track and aiming to get an updated version of the Vector into customers’ hands next year. 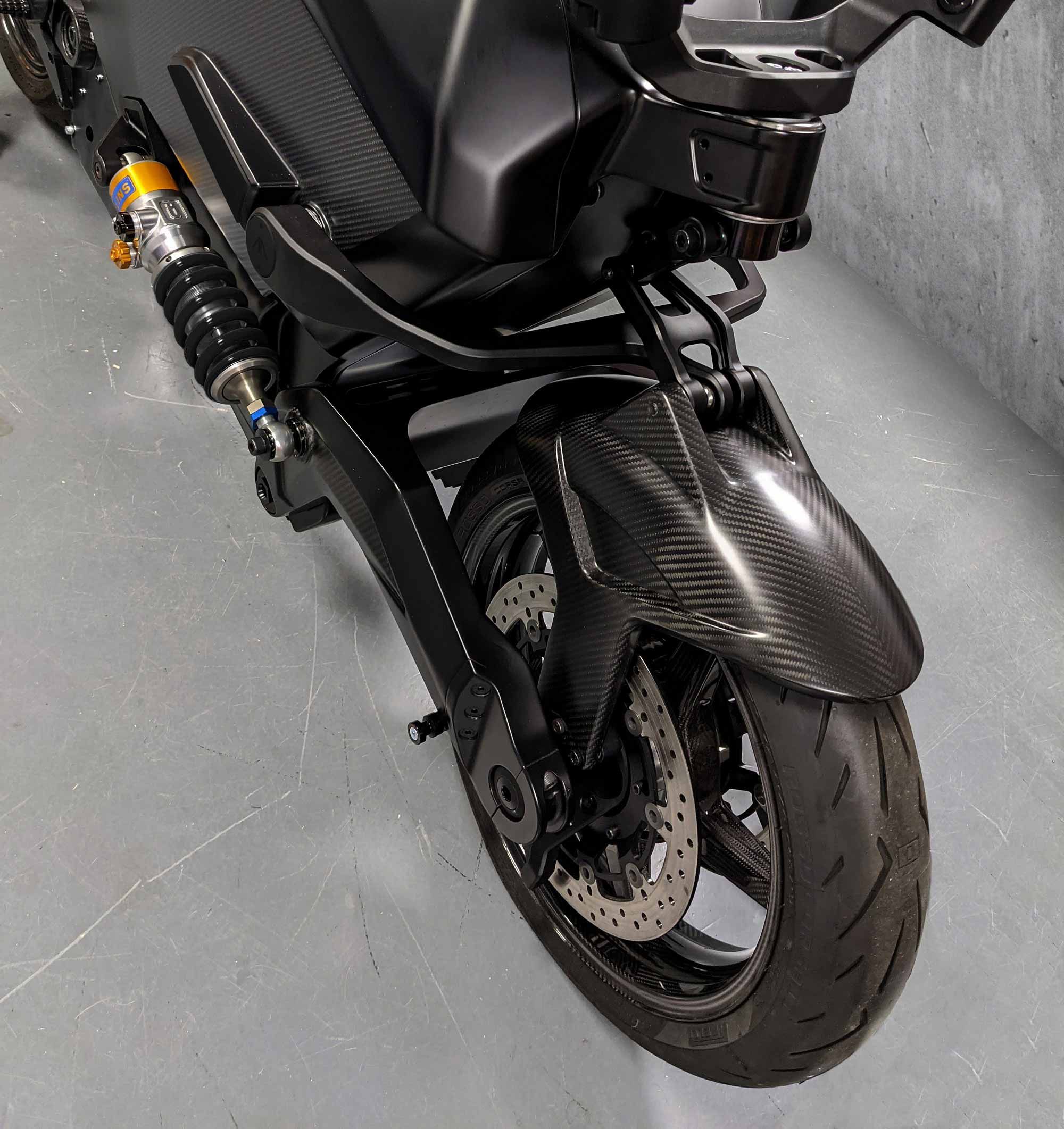 As before, the bike features a hub-center-steered front end with wishbone style dual swingarms. (Arc Vehicles/)

Arc was founded by Mark Truman, whose previous role was Head of White Space at Jaguar Land Rover, running the firm’s ‘Skunk Works’ and exploring some of the more daring ideas for that company’s future. The Vector reflects the same sort of innovative thinking, with avant garde ideas including a haptic jacket to provide physical feedback to the rider and a helmet incorporating a head-up display. Arc was rescued from administration when Truman bought back the key assets of the project in 2020 and work has been underway since then to turn the ideas into reality.

Now the bike is nearing production, and Arc has released images of the Vector stripped of its bodywork to show the chassis underneath. Truman says “The architecture featured in the images is now production-ready and a number of production spec Vector motorcycles will be out in Spain for final sign-off and homologation over the coming months.” 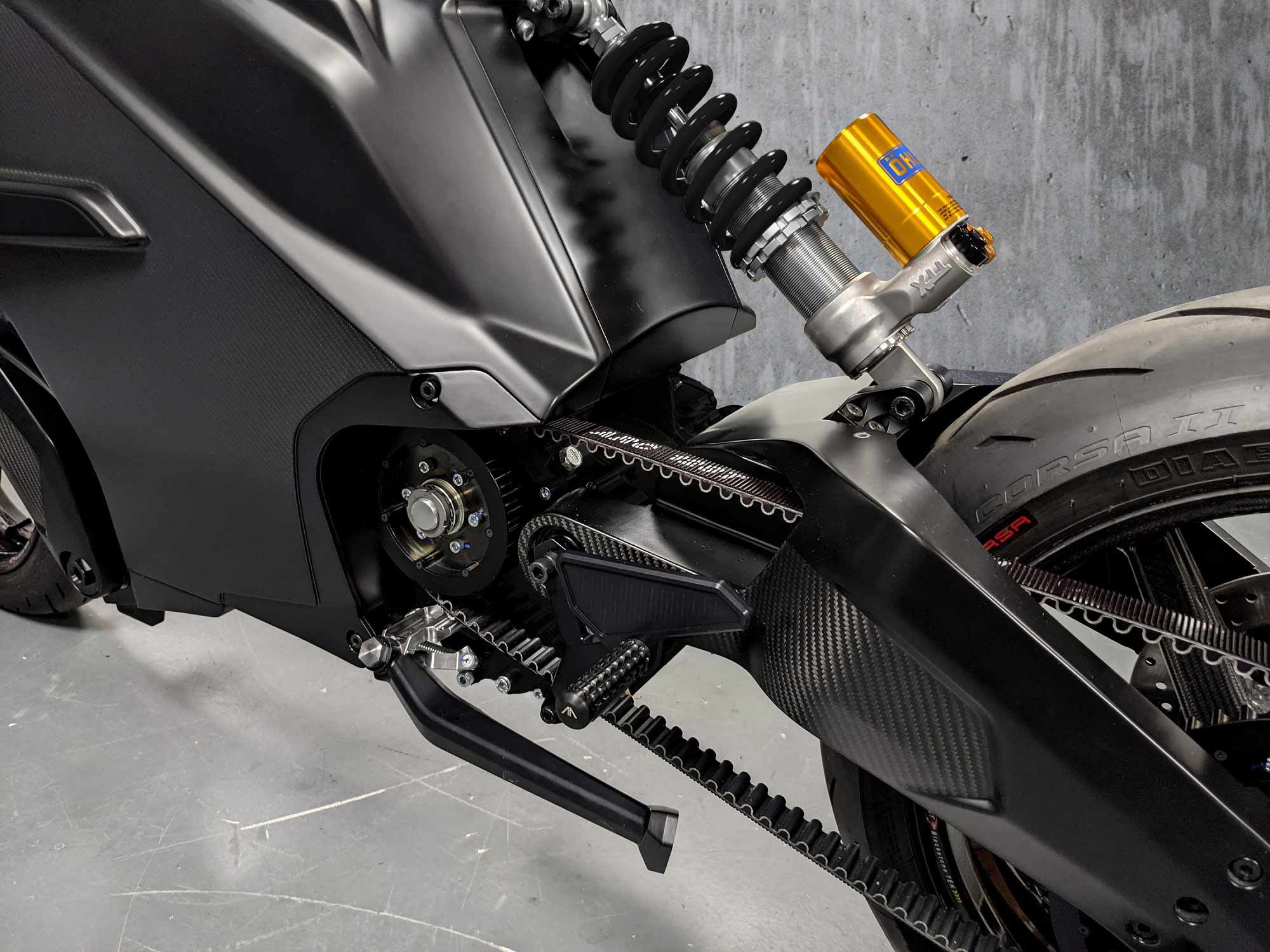 Final drive is now a belt instead of the previous chain spec, though the rear carbon swingarm remains. Motor and single speed transmission is integrated into the rear end. (Arc Vehicles/)

The pictures reveal the bike’s carbon-fiber monocoque chassis, which doubles as the battery case and removes the need for a traditional frame. This allows the front and rear suspension to be bolted directly to the battery module, with the motor and single-speed transmission integrated into the rear end.

At the back there’s a carbon swingarm with an Öhlins shock acting directly against the monocoque and, in a change to the original specification, a belt final driven instead of the previous chain. Both wheels are also carbon-fiber, made by BST, and instead of conventional forks there’s a hub-center-steered front end, with wishbone-style dual swingarms. The lower, main swingarm is carbon, bolted to a carbon upright that doubles as the front fender. A smaller upper wishbone is attached to the top of the fender/upright and pivots higher on the monocoque. The carbon fender/upright also allows a fairly direct steering connection, with a scissor-style linkage between the bars and the top of the upright. Brembo brakes are backed up by a regenerative braking system to recoup energy as you decelerate. 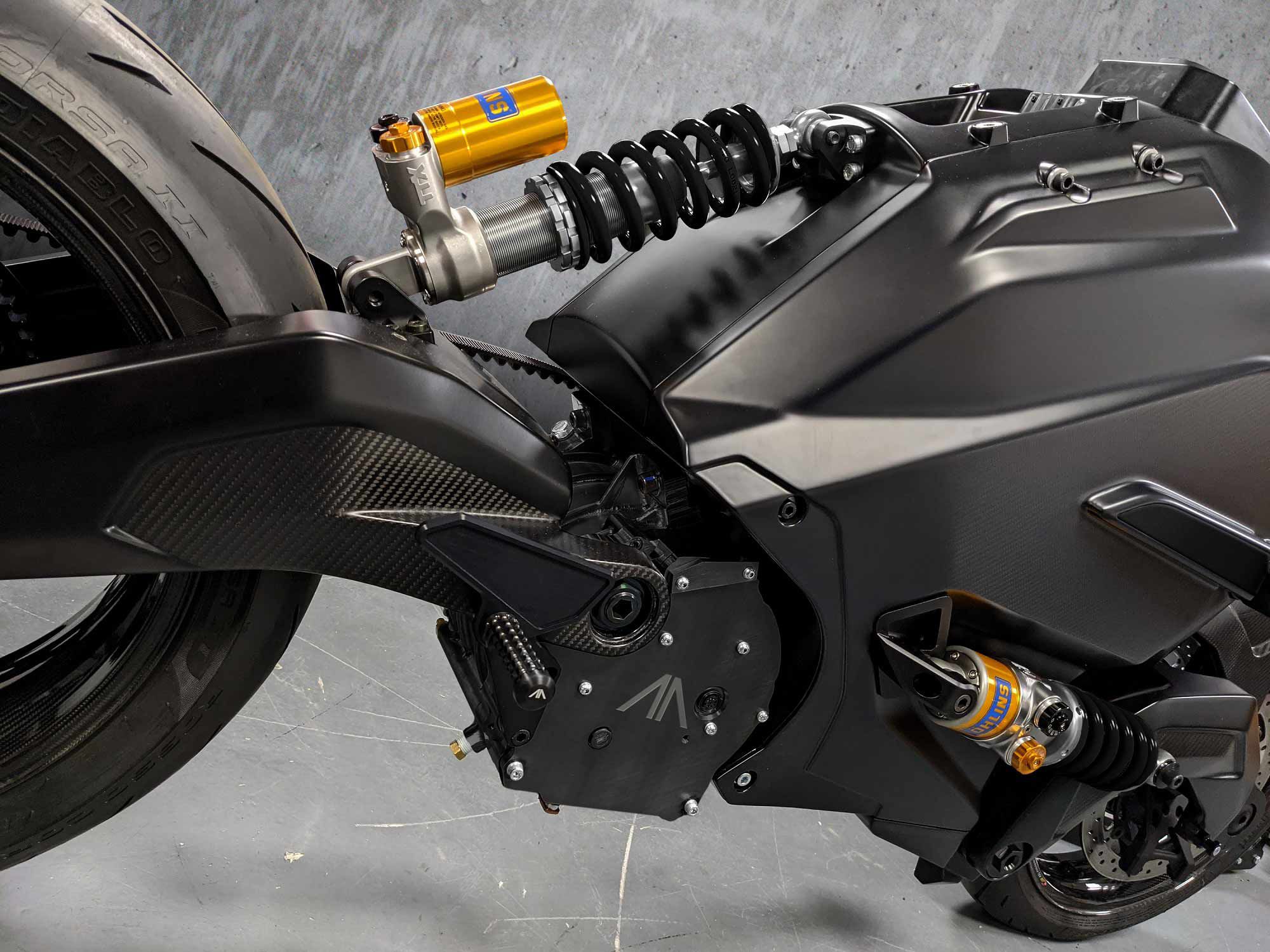 An Öhlins rear shock bolts to the battery module and acts directly against the monocoque chassis. (Arc Vehicles/)

The motor itself is Arc’s own design and was originally claimed to make around 133hp, although that figure relates to the first version of the bike and might be revised for the final model. The bike weighs 485 pounds, and thanks to a 399V battery, the firm claims performance figures including a 3.2 second 0-62mph time, a top speed of 124mph and a range of 271 miles. Charging time is said to be just 40 minutes when using a fast charger through the standard CCS DC socket on top of the “tank.”

Each bike will be tailored to suit its owner, with CNC-machined brackets for the bars and pegs made to each rider’s preferences, and the high-tech jacket and helmet are part of the deal. The precise price has yet to be confirmed but the bike was originally launched with a proposed £90,000 ($120,000) tag. Despite that cost of entry, Arc isn’t short of orders. Truman says “We have a very healthy order book and customers are already going through our new commissioning suite in Central England to individually tailor each Vector motorcycle so that they are all unique.”