SWM Updates Its 2022 Model Lineup With ABS And Euro5 Compliance 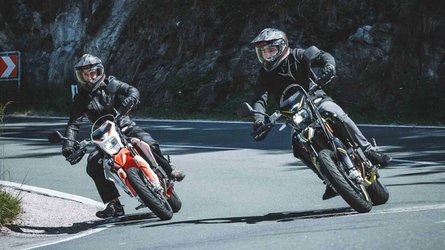 Italian-owned motorcycle brand SWM has refined its 2022 model lineup with changes to the braking system as well as engine mapping setups for Euro5 compliance. The next-generation 125cc beginner-friendly motorcycles are ditching the combined braking system (CBS) for 2021, in favor of a safer, more conventional ABS setup, similar to bigger, more powerful machines.

A1 licensing regulations require motorcycles of this category to feature either ABS or CBS, the latter is something much less frequently found on bigger bikes—plus, CBS doesn’t offer any locking protection in the event of an emergency braking situation. As such, the Italian manufacturer has opted for ABS, which is really a better fit for its small and sporty beginner bikes which consist of supermoto, enduro, and scrambler offerings.

The SWM SM 125 R supermoto is now equipped with a new ABS setup, and retains its 15-horsepower, four-stroke, 125cc, single-cylinder motor. Refinements to the power plant have resulted in Euro 5 compliance, while subtle improvements to the bike’s features give it a more premium look and feel. It now gets new LED lights, a digital instrument panel, and a USB charger—all for 4,549 Euros ($5,276). Riders looking for a more conventional naked bike approach will be best served by the SWM Varez 125, which employs traditional naked bike styling. It gets similar updates as that of the SM 125 R, and is more affordable at 4,249 Euros ($4,928)

SWM’s retro-styled machines, the Ace of Spades and Gran Milano Outlaw both share similar tech and performance as the SM 125 R and Varez 125, albeit packaged in a hipster, Instagram-friendly, neo-retro package. They both feature a raised dual muffler, round headlight, and conventionally styled fuel tank for maximum retro energy. The only thing separating the two is the choice of tires—the Ace gets dual-sport tires, while the Gran Milano gets street tires. To top it all off, the two retro-style bikes are the cheapest of the lot at just 4,049 Euros ($4,696) a piece.

Nicky Hayden Inducted into the Motorsports Hall of Fame