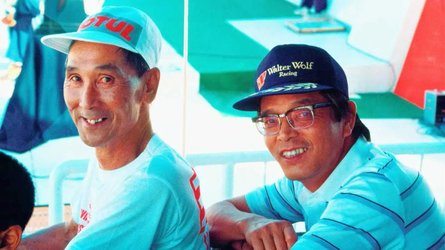 Multi-talented, extremely influential Suzuki engineer Etsuo Yokouchi died in Japan on Wednesday, October 20, 2021 at the age of 87. From the GSX-R family to the Katana to the RG250 Gamma, Yokouchi’s indelible fingerprints are all over some of the world’s best-loved Suzuki models.

Yokouchi was born in Miyazaki prefecture, Japan in 1934. He began at Suzuki in 1957, where worked in the design department. While he didn’t design motorcycles in a vacuum, many of Suzuki’s most memorable bikes wouldn’t have come out the way they did without Yokouchi’s vision and involvement.

Over the course of Yokouchi’s career, he worked his way up to the position of Deputy General Manager of Motorcycle Design. The GS750, GS1100, Katana, GSX-R750 and 1100 were all Yokouchi bikes. The Suzuka 8 Hours-winning Yoshimura Suzuki GS1000s ridden by Wes Cooley were the product of a collaboration between Yokouchi and none other than the one and only Pops Yoshimura. When the man wasn’t creating production Suzuki motorcycles, he was pulling the strings behind Suzuki’s racing program.

Moto journalist Hiroshi Nakamura penned a beautiful obituary for the man in Autoby, crediting him with inspiring a kid who knew nothing about motorcycles to completely love them. According to Nakamura, he managed to do this simply by virtue of his arresting designs, as well as his near-constant presence in Japanese motorcycle magazines of the 1980s.

By the time Nakamura was making his way in the journalism world, Yokouchi had become so important within Suzuki that at first, he was denied an interview. However, after he eventually convinced the right people to connect him with Yokouchi, the two eventually became lifelong friends.

Even after Yokouchi officially retired from Suzuki, he was always an engineer. He went on to lecture and teach post-Suzuki, although “post-Suzuki” may not actually have been a thing. Although both the 1996 GSX-R750 and 2000 GSX-R1000 were designed after Yokouchi was no longer technically with the company, he still had his hands all over their production. For a man who said that he basically just thought about motorcycles 24 hours a day, that probably shouldn’t come as a surprise.

We at RideApart send our deepest sympathies to all of Yokouchi’s friends, family, and fans around the world who are keenly feeling his loss.