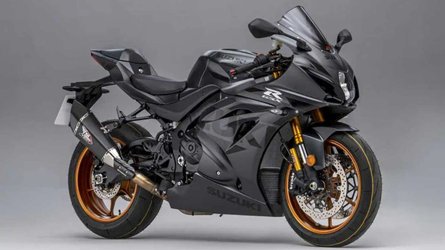 Aside from the updated GSX-S1000 and Hayabusa, Suzuki’s 2021 lineup was light on novelty. So far, the 2022 range has followed suit, with several models returning unchanged. While the GSX-R1000R is among the unrevised models, the House of Hamamatsu is giving the long in the tooth platform a jumpstart with the limited-edition Phantom trim.

Originally released in 2006 as the GSX-R1000 K6 Phantom, the bike was designed to suit both road racers and road riders. Unlike the old Phantom’s silver and black livery, the new GSX-R1000R version lives up to the Phantom name, coming cloaked in Suzuki’s Metallic Matt Black No.2 paint. Of course, the gold wheels and gold Showa Balance Free fork accent the understated color scheme.

Suzuki doesn’t stop at the paint job, however. The Phantom guise also boasts clutch and brake lever guards, a tank pad, and fuel cap trim. The smoked double-bubble screen may reduce visibility in a full tuck, but it certainly completes the blacked-out ensemble. On the performance front, a Yoshimura R11 silencer also sweetens the deal. The brand’s black metal magic finish, black heatshield, and carbon cap stick to the blacked-out theme as well.

Under the black bodywork and Suzuki catalog goodies, the GSX-R1000R retains its liquid-cooled, DOHC, 1,000cc inline-four with variable valve timing. The tried-and-true mill still pumps out a very respectable (by superbike standards) 199 horsepower and 86.7 lb-ft of torque. Though the Phantom Edition is an exciting take on the GSX-R1000R platform, Suzuki will only produce 100 units of the limited trim. Additionally, the brand will only offer the Phantom to the U.K. market.