At the first round of the 2021 MotoGP season, Pramac Ducati rider Johann Zarco set a new series top-speed record of 225 mph. At that speed, riders cover 330 feet in one second. The average blink takes 0.15 seconds, so riders traveling at that top velocity are effectively blind for nearly 50 feet of track.

That sounds like a terrifying prospect to us mortals, but a study between LCR Honda and Italian pharmaceutical company Sifi helps explain how MotoGP riders’ eyes function in such extreme conditions. Conducted over six MotoGP seasons (2015-2021), the researchers first examined Cal Crutchlow at the 2015 Valencia GP. By 2018, fellow LCR rider Taka Nakagami joined the study, and in 2019, the survey expanded to the MotoGP, Moto2, and Moto3 ranks.

During each evaluation, the Grand Prix riders would undergo test prior to the race and 30 minutes following the checkered flag. The dual-test method revealed that rider reaction times and pupil performance remain in “Race Mode” for an extended period. Researchers also found that MotoGP riders blinked much less frequently than their Moto2 and Moto3 counterparts. 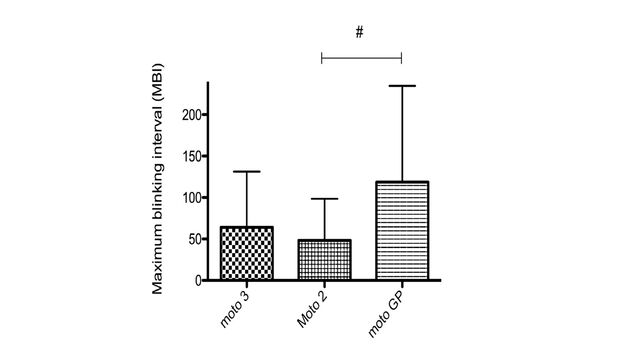 However, all racers easily exceeded the normal 4-6-second blink interval. Despite the stressful conditions, none of the subjects exhibited red, dry eyes or inflammation. The results may be fascinating, but Sifi co-owner Carlos Chines believes this is just the beginning of a broader, long-term study.

“We basically want to continue researching the differences between ‘normal’ eyes and those of MotoGP riders,” revealed Dr. Chines. “We also want to investigate the relationship between concentration and blink rate. From these results, we expect to understand whether one can work with little tricks, exercises, or eye drops to counteract fatigue, dry or sore eyes, and deterioration in vision.”

Of course, Grand Prix riders already train physically and mentally throughout the year. Armed with Sifi’s data and analysis, visual training may become a part of rider regiments moving forward.

“Explicit training methods for the eyes are being planned for 2022 and 2023,” added Dr. Chines. “In addition, we generally want to create a different perception of “eye care” in society and sensitize people to prevention.”