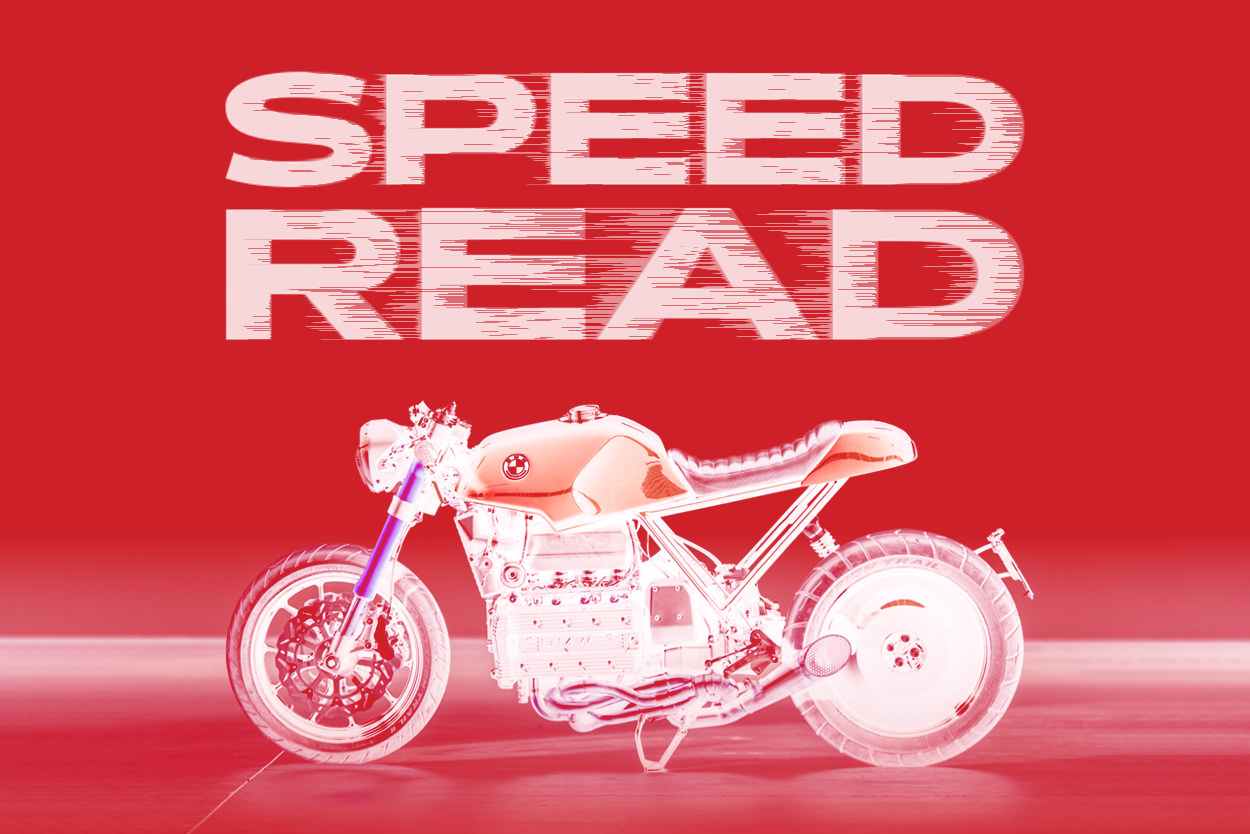 The only way this year could be worse than the last, is if a planet-ending comet spiraled towards the earth or if ska music made a comeback. But we’ve got high hopes for 2022 as we wake up, bleary-eyed and heads spinning from our New Year’s Eve celebrations.

So we’ve assembled some tasty custom motorcycles to take the edge off your hangovers and herald in what is sure to be a kick-ass year. There’s a killer BMW K100 cafe racer, a Honda Rebel scrambler, a nimble Yamaha RX from India, a revived Honda CB550 and a gorgeous Honda S90. 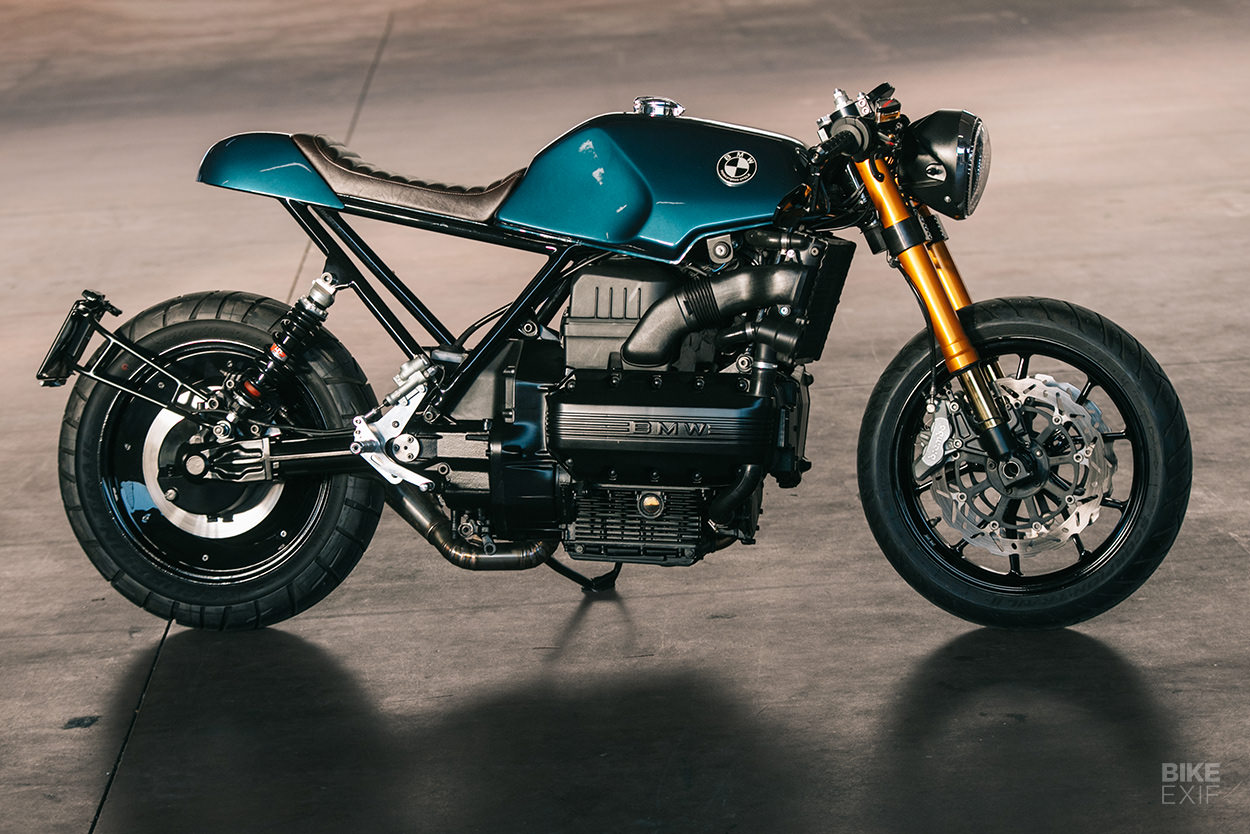 BMW K100 by Remastered Cycle You’ve heard the story before. This BMW K100RS was bought by a guy who had had some grand plans for a custom build. But then life got in the way, so the old Beemer sat around collecting dust for five years, before the owner bit the bullet and wheeled it down to Remastered Cycle in Brescia, Italy.

“On this motorcycle we worked to make everything as light and minimal as possible,” says Remastered’s Luca Morelli. “We wanted an elegant but sharp bike, able to excite its rider when the pace rises on tour.” And with the 1999-model K100 now looking fast when standing still, it’s safe to say Remastered Cycle nailed the brief. 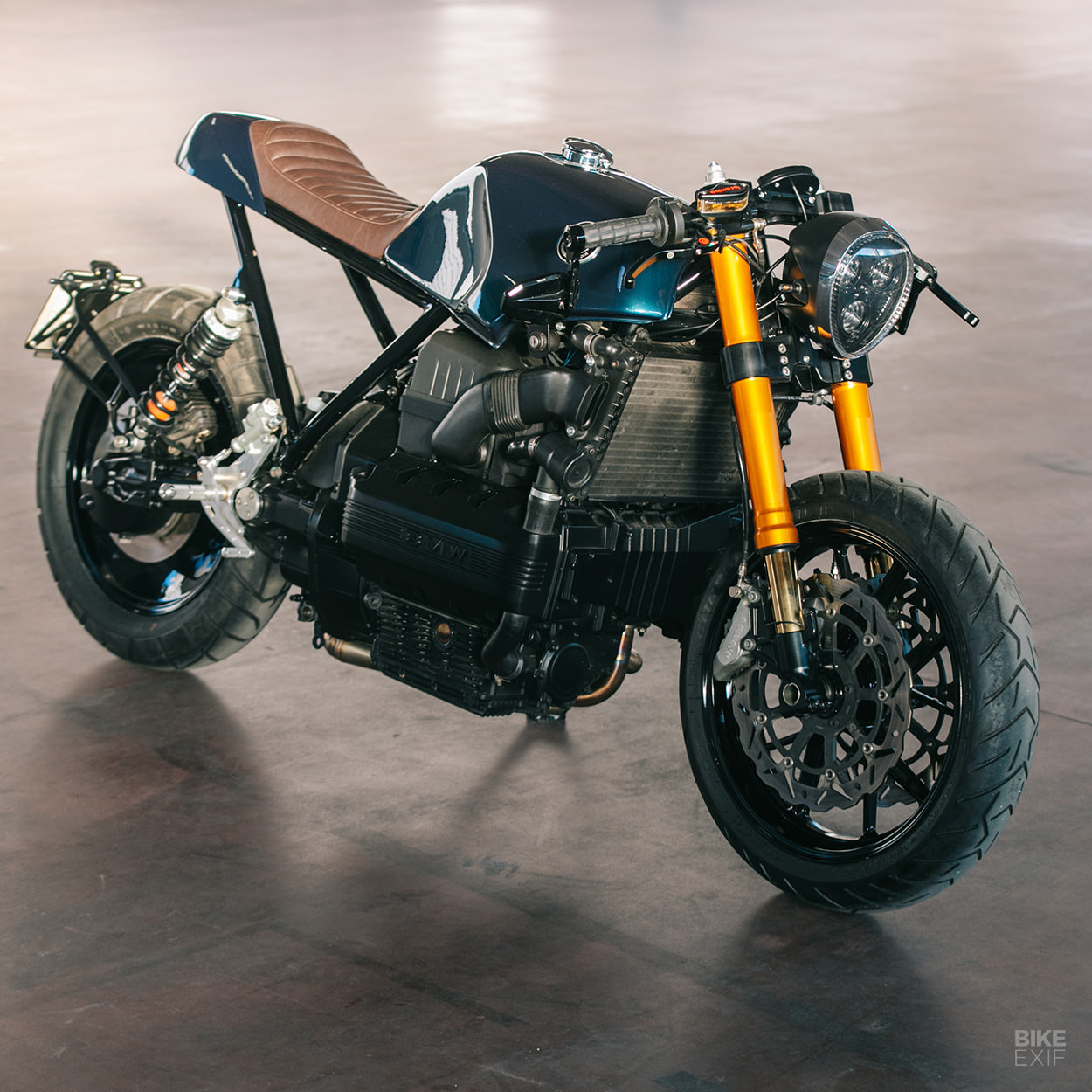 An enormous amount of work is required to turn a heavyweight autobahn bomber into an aggressive café racer. Up front is the upside-down assembly from a Ducati 749, paired to the frame with new triple clamps. The front rim is a Machesini M10RR magnesium number, that runs a Brembo master cylinder, twin waved discs and braided hoses. 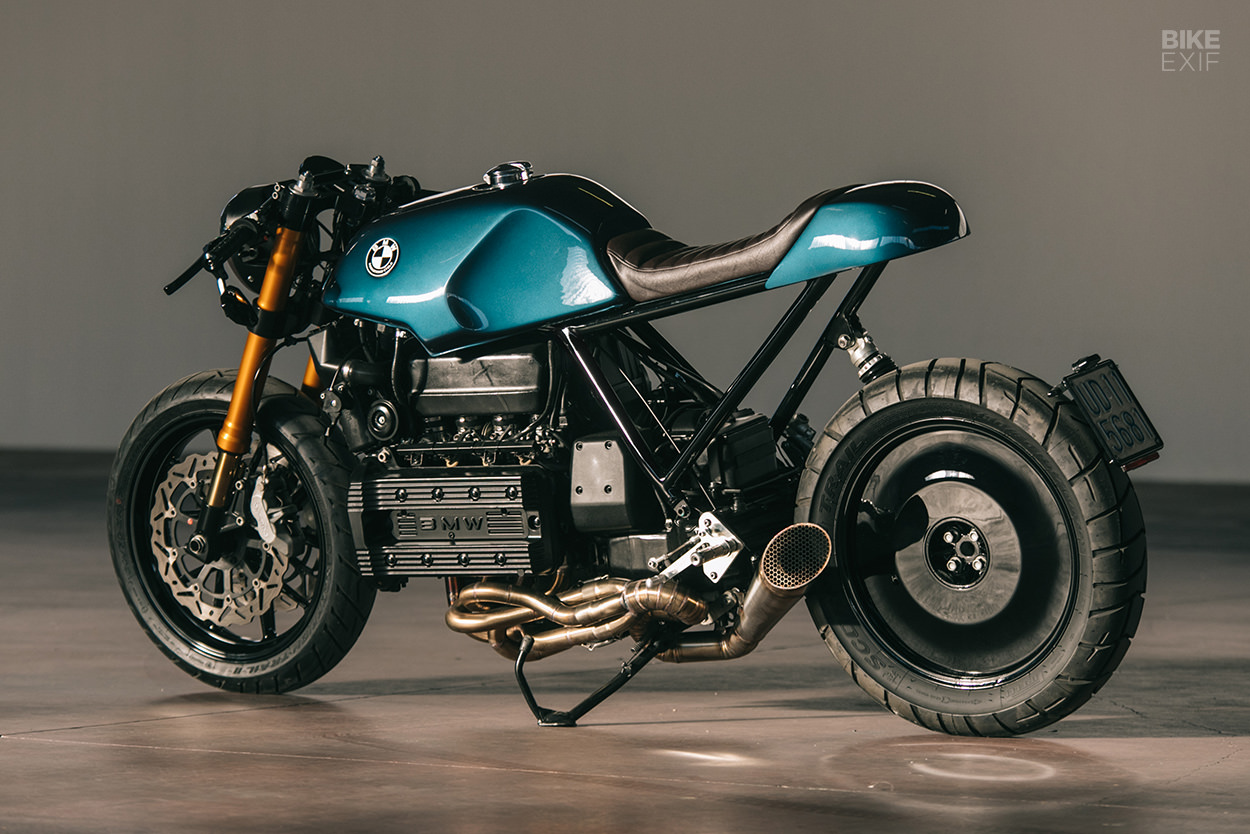 But most of the construction work is in the rear—much like a period house renovation or a Kardashian. The electrics have been carefully Tetris-ed away under the rear seat hump, which also houses an integrated LED brake and indicator unit.

The subframe was removed too, and a new assembly fabricated in-house. Note the attention to detail: like the rest of the frame work, all the welds were smoothed out and painted over. There’s not a visible bead in sight. 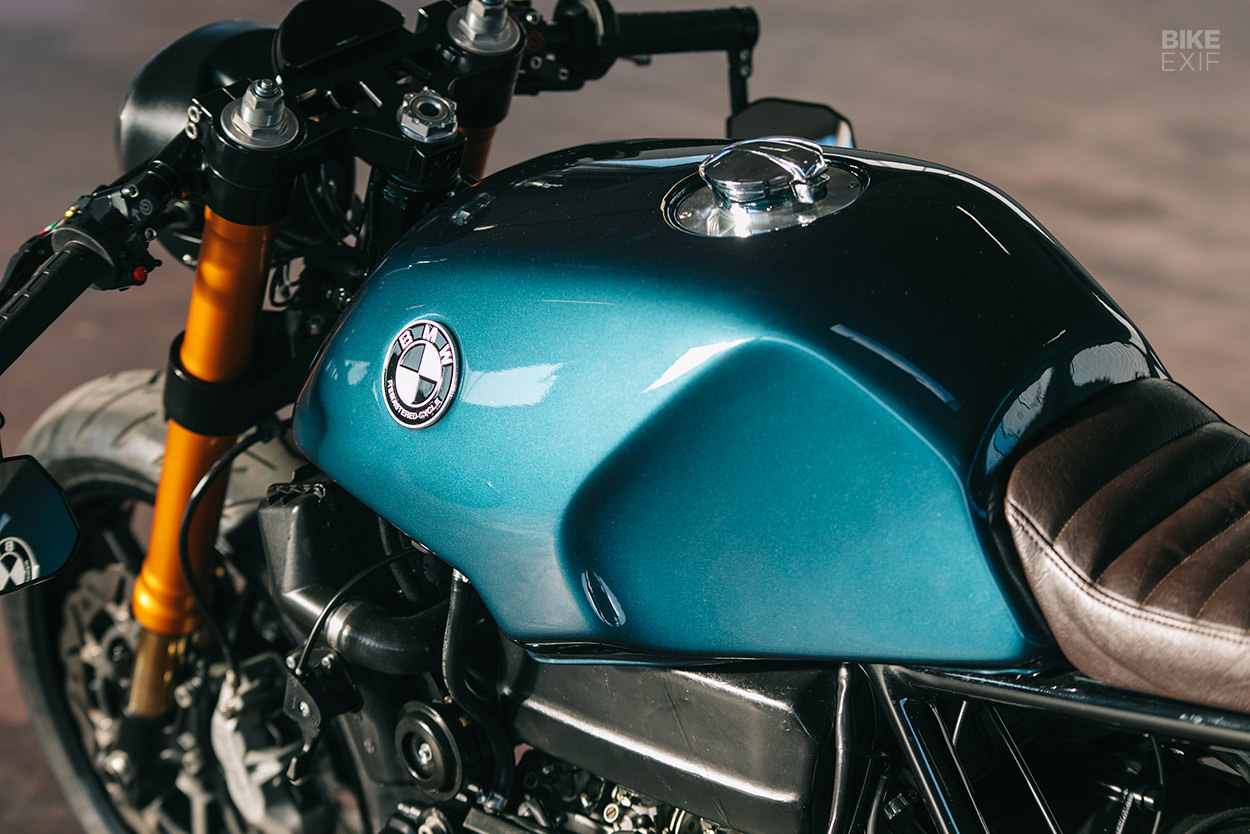 Rounding out this stellar build is a gorgeously intricate exhaust system made by Scalvini racing, a leather saddle crafted by Gambirazio upholstery, and a beautiful marine blue paint inspired by the Mercedes AMG G-series wagon.

We’ve seen more than a few café racers built out of BMW’s iconic sports tourer, but rarely are they as stripped-back and as clean as this. [Remastered Cycle | Images by Simone Benedetti] 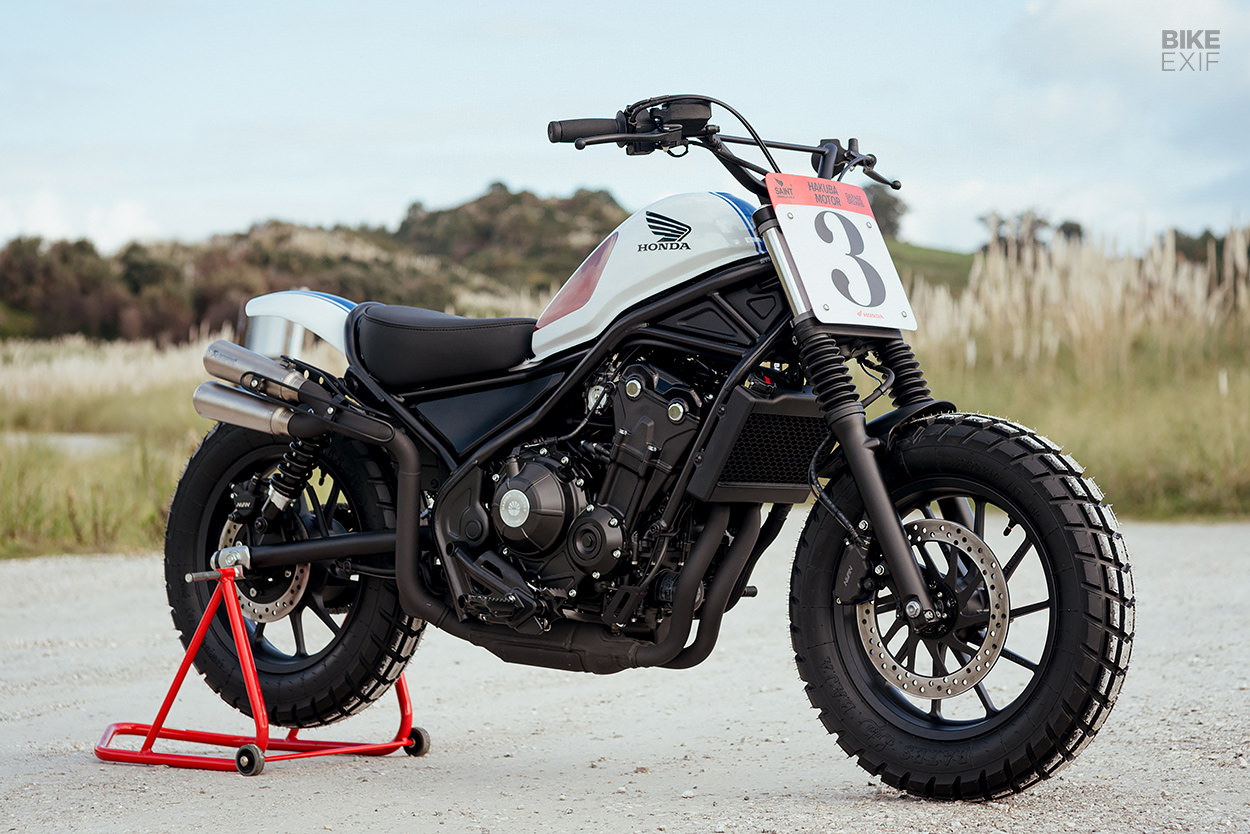 Honda Rebel 500 by Hakuba Motor We’re staying in Europe, but with a huge shift in style and weight, with Hakuba Motor’s tidy little Rebel 500 scrambler. It’s the result of a build-off competition run by Honda Iberia, where dealers all had to tackle the same model.

Hakuba Motor went into the affair quietly confident, having trounced the competition in 2019 with a Freddie Spencer-influenced CB1000R. This year they had the option of a Honda Rebel 500 or its new bigger brother, the Rebel 1100. They opted for the smaller of the two, which would better suit the plan the team had for the bike. 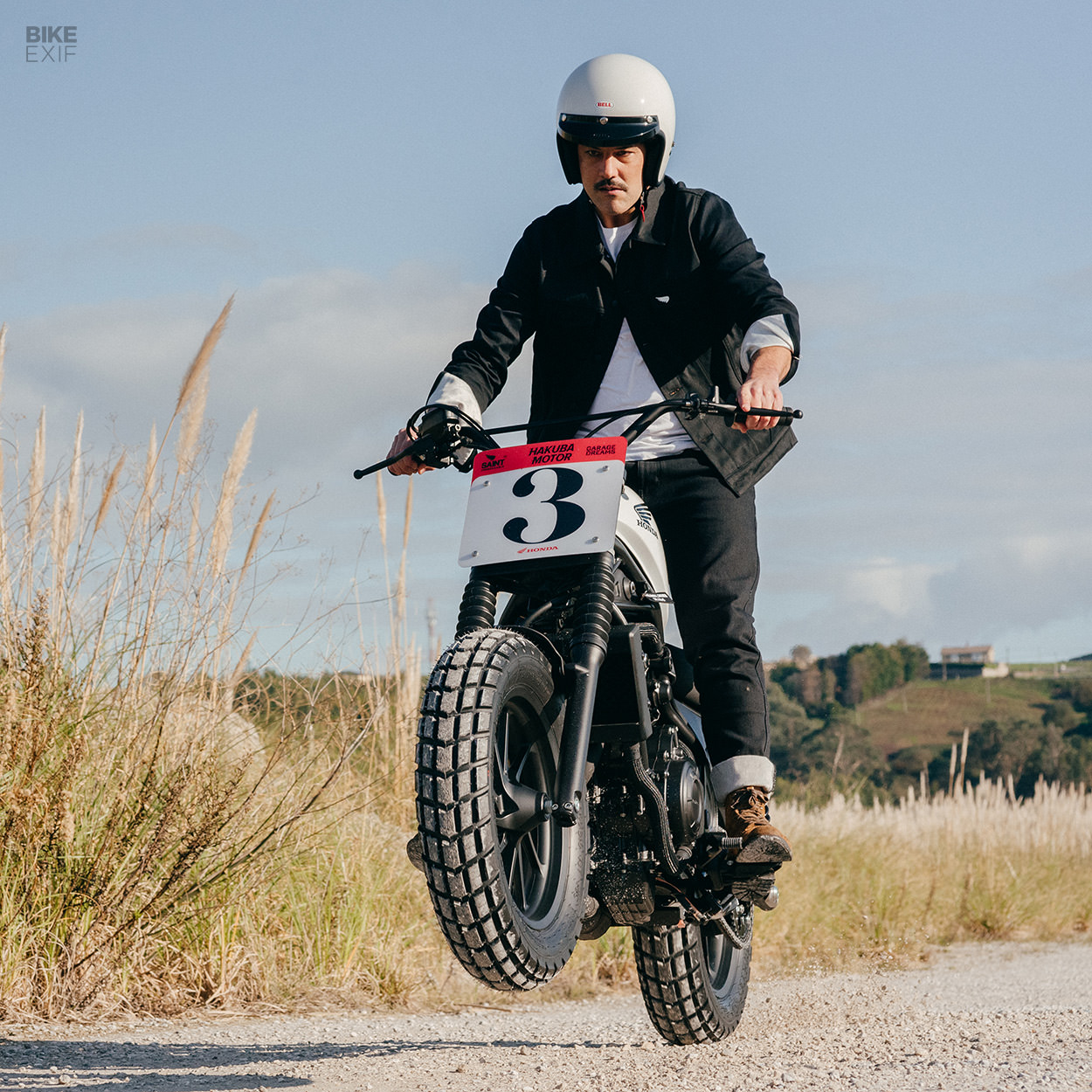 “We focused on its classic looks and heritage,” Hakuba’s Lorenzo Vidal says, “but we decided to throw it back a little, adding a scrambler-y look and feel to the build. The idea was to chase the 1960s ‘client bike’ vibe—that’s what we call old modified off-road Triumphs out here. Something that you’d race on Sunday and put back together to ride to work on Monday.” 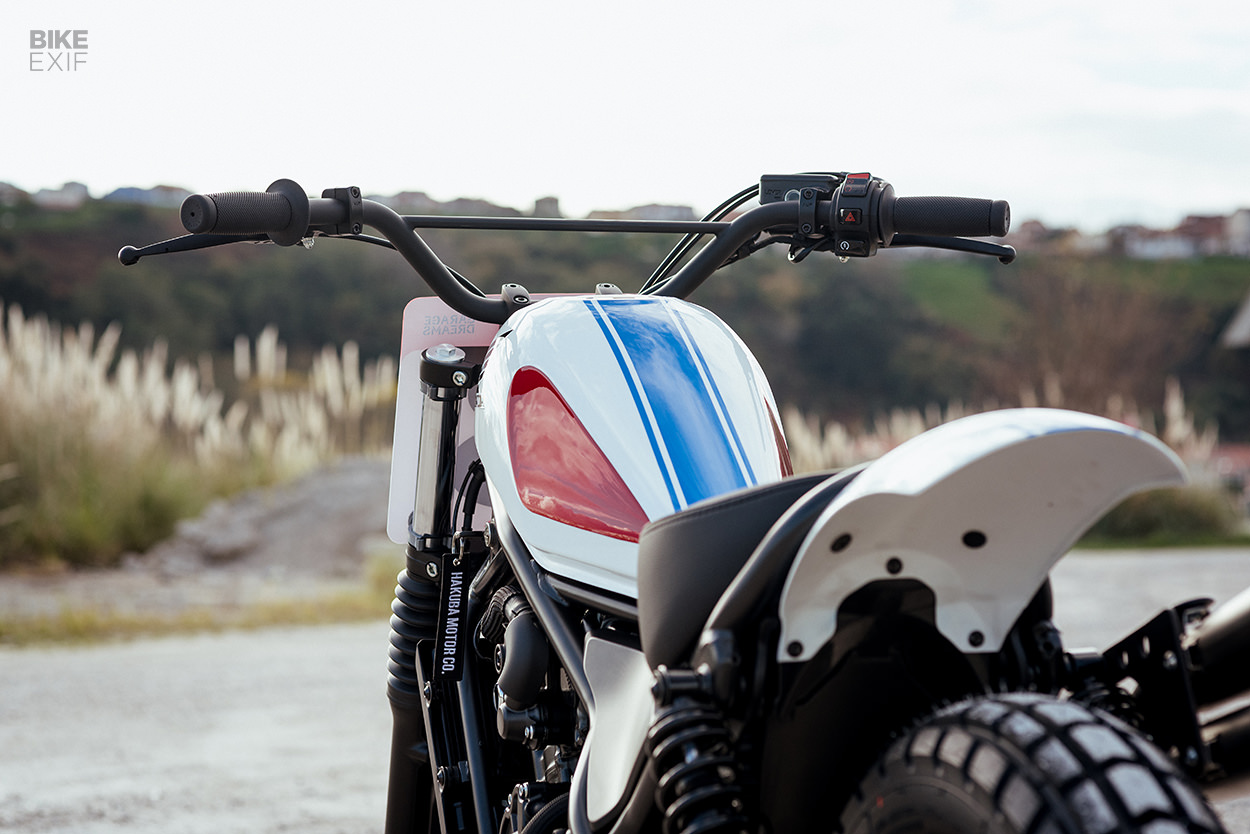 As an entry-level motorcycle, the Rebel 500 is cleverly designed for new riders to duck waddle their way through intersections. But such a low and accessible ride isn’t conducive to an off-road machine. So the rear shocks were replaced by Progressive Suspension 412 units, fattening up the back end of the bike and lifting the tail.

This was matched at the front by Bates Baja handlebars running Biltwell Inc. grips. It’s a neat little trick that manages to visually even out both ends, without resorting to the cost and complexity of a fork swap. 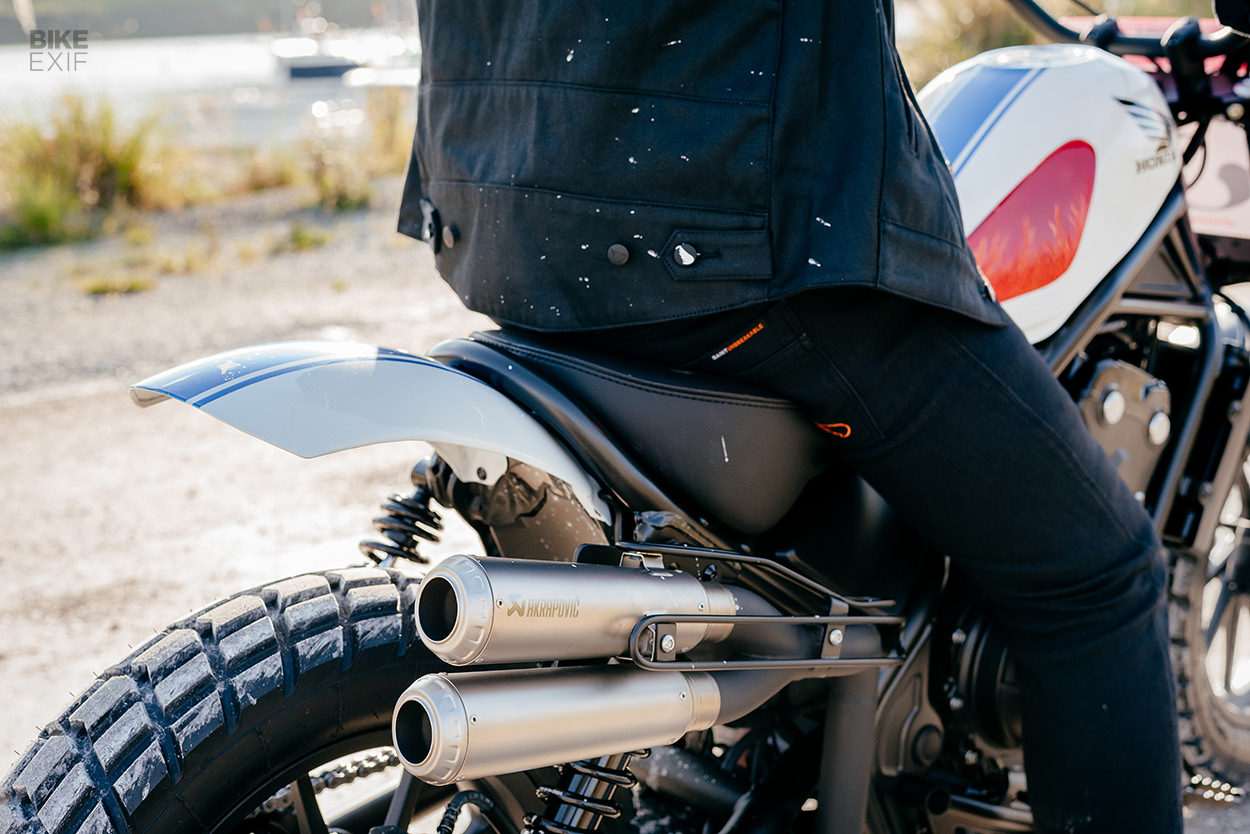 The team saw a high-mounted exhaust muffler as a necessity, and came across a set of Akrapovič mufflers designed for the Honda Monkey. “The rest, as they say, is history,” says Lorenzo. “Well, not really—because it took six hours of welding and fitting to get them to look right.”

Bringing the whole build together is a neat retro-inspired Honda livery, done in-house by the workshop’s painter. “As you can see with the photos the bike was redesigned to lighten things up, show a fun side of the Rebel and, above all, give it that bit of character we thought was missing,” Lorenzo says. [Hakuba Motor | Images by Manuel Ruiz] 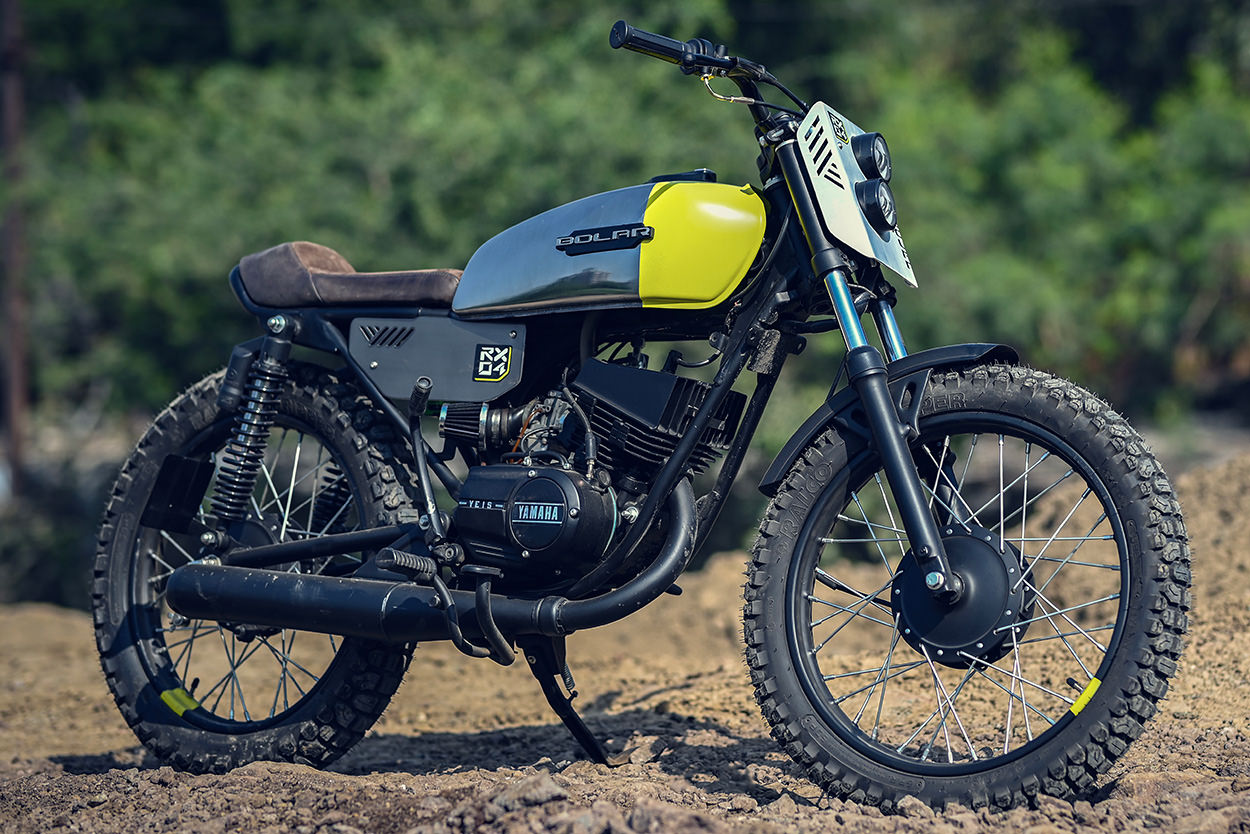 Yamaha RX-135 by Bolar Customs On the other side of the world we have Shashwath Bolar—an automotive designer based in Pune, India. His gorgeous little Yamaha RX-135 street tracker has been built with more love and care than any bike we’ve seen in a long time.

It’s barely known in the West, but Yamaha’s Indian-built two-stroke RX is a cult bike throughout South Pacific. For years, the line of raucous little two strokes dominated local sales, and developed a cult following who raced the bike however they could. People loved them, modified them, tuned them and lusted after them. 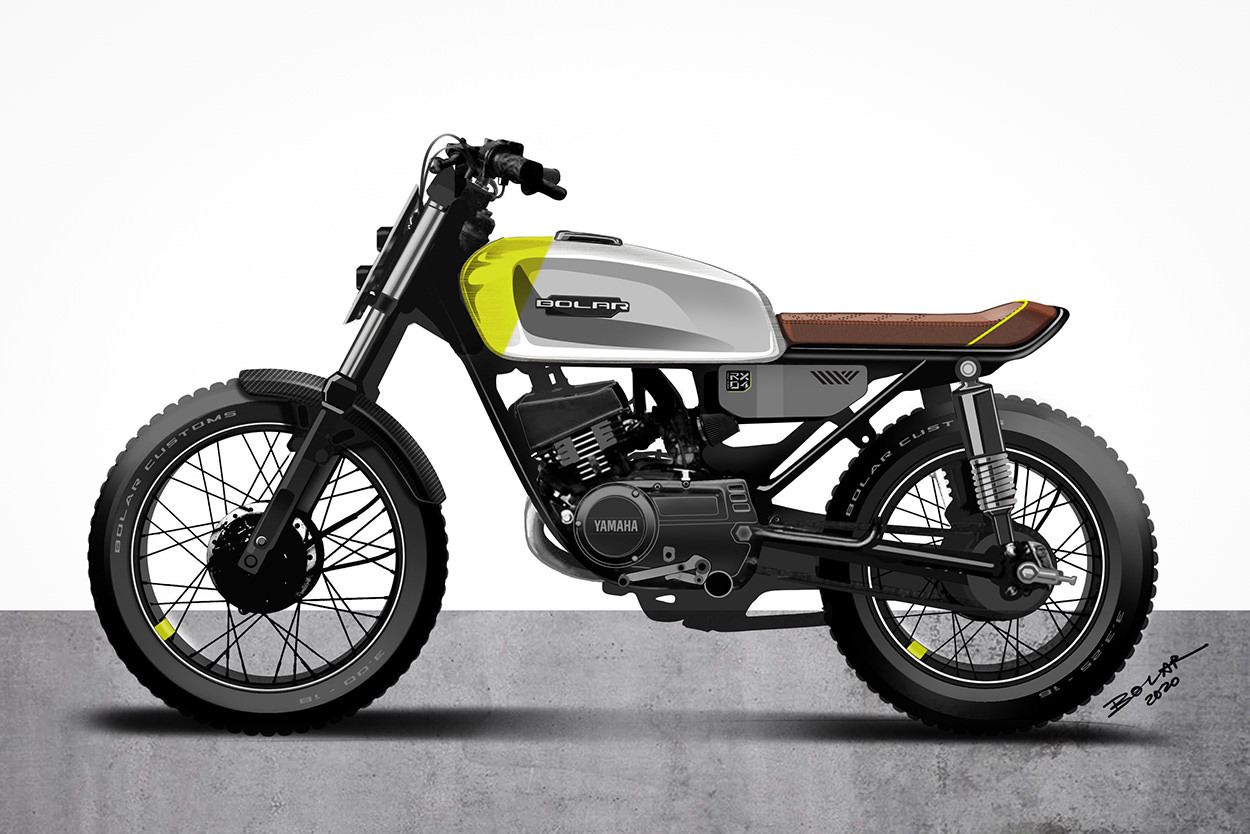 “I’ve always wanted to pay homage to this mechanical beauty,” says Shashwath, “and after years of poring through Bike EXIF, Instagram and international auto shows, I knew I wanted to build a mix of a café racer and a tracker.”

Shashwath converted one of his bedrooms in his apartment into a workshop, before pushing in his 20-year-old Yamaha and pulling it apart. Once the bare bones of the bike were exposed he started planning the build in Photoshop, adding layers over the naked frame. 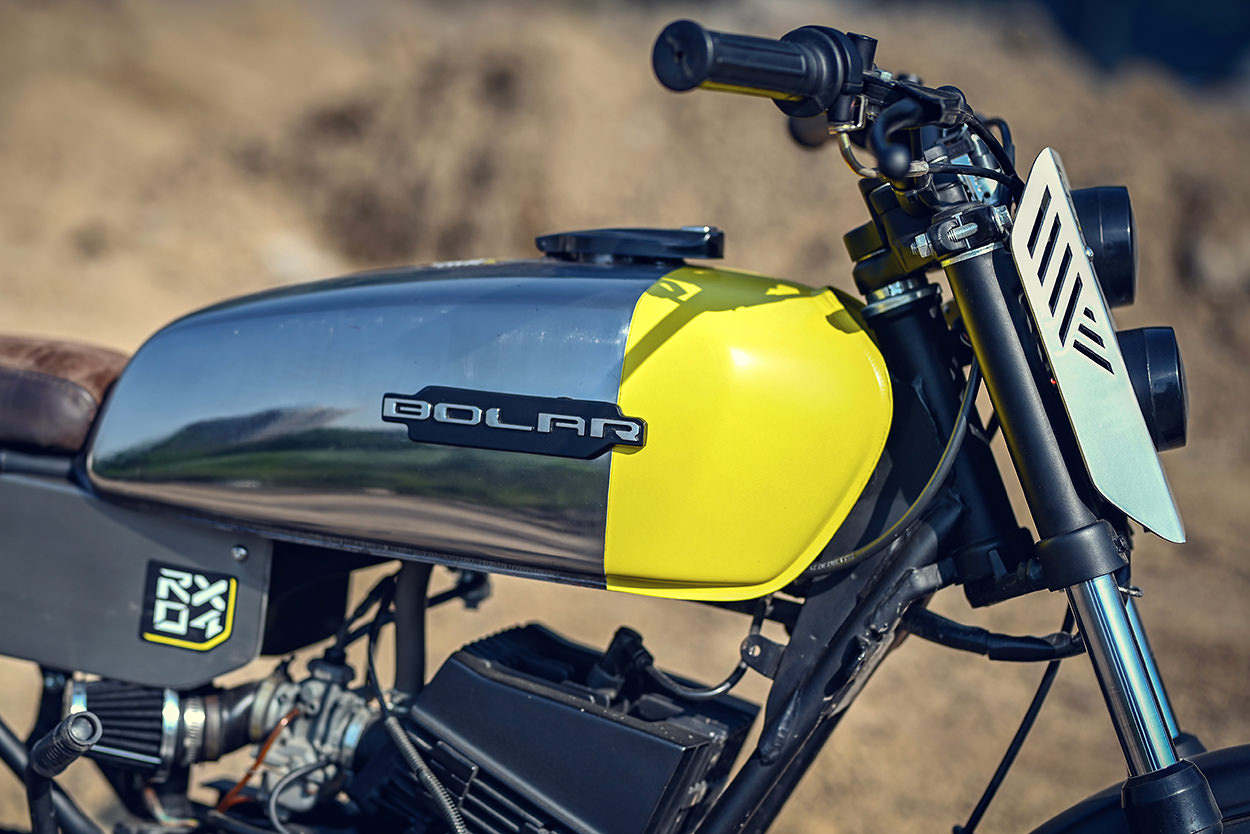 Shashwath used some clever techniques to ensure custom-made parts would fit and look the part. With the side panels, he’d create several prototype designs in 2D, print them out onto foam boards, cut them out and fit them to see what worked. When the final design was realized, he had them laser-cut from aluminum by a local steel workshop.

Shashwath also hacksawed off the rear frame rails and engaged a local welder, Irfan, to affix a brace between the two sides. He then tried out a bunch of different shapes for the rear loop by using a solid plastic tube, made malleable over a naked flame. Grounddesigns fabricated the final steel part, and helped out on a few other bits—like the brackets used to mount the side covers. 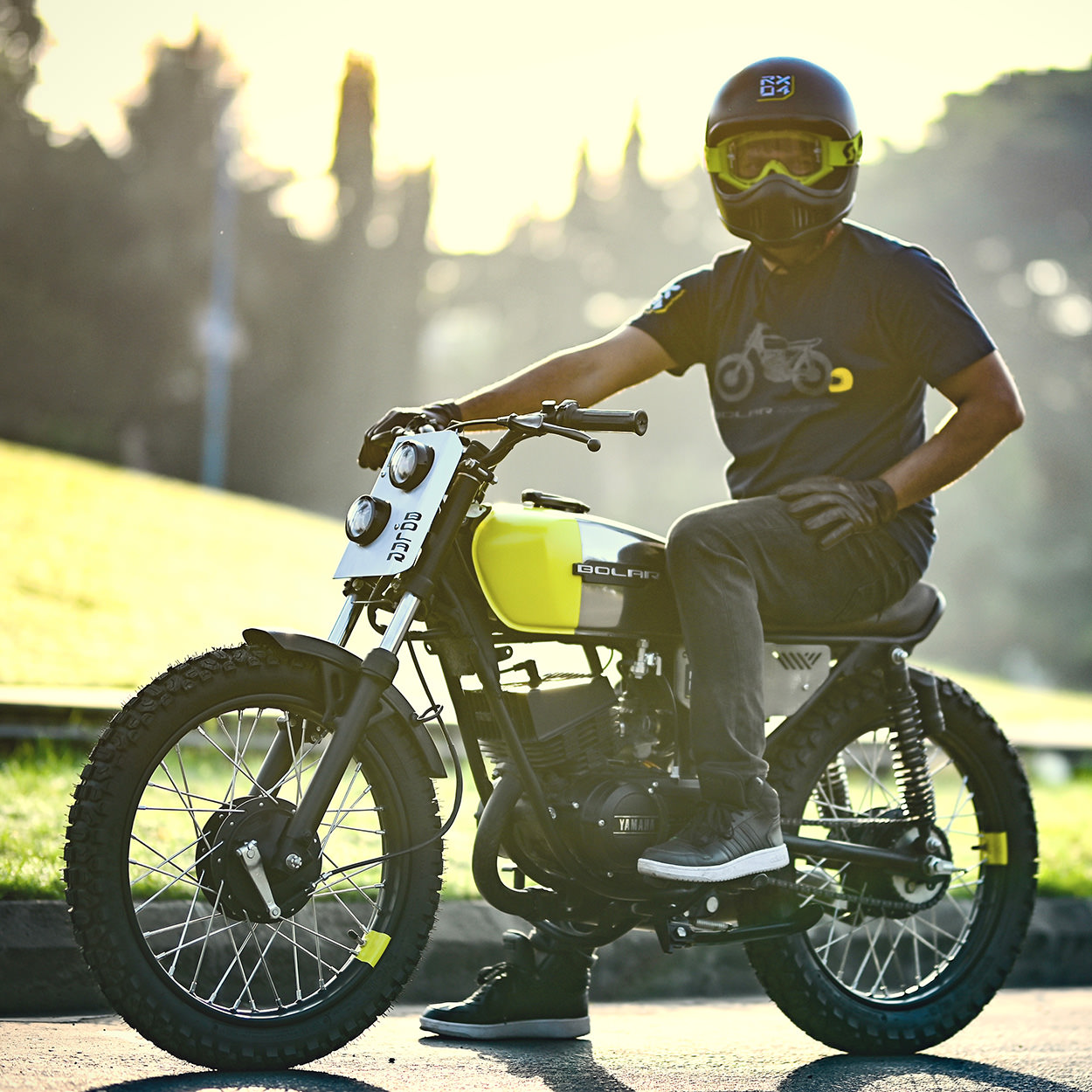 The standard fuel tank was stripped back and sanded with differing levels of emery paper. The top was given a rougher, brushed finish while the sides were sanded and polished to a high sheen. A layer of clear lacquer keeps the metalwork sealed from the elements.

Finishing touches include a custom headlight nacelle, a stubby seat and an inspired mix of finishes. Most of the hard parts wear black coats of various sheens and depths, with fluo-yellow highlights drawing your eye around the bike. It’s a clever blend of textures, shades and colors that manage to complement one another perfectly. [Bolar Customs | Images by Vijayendra Jadhavrao] 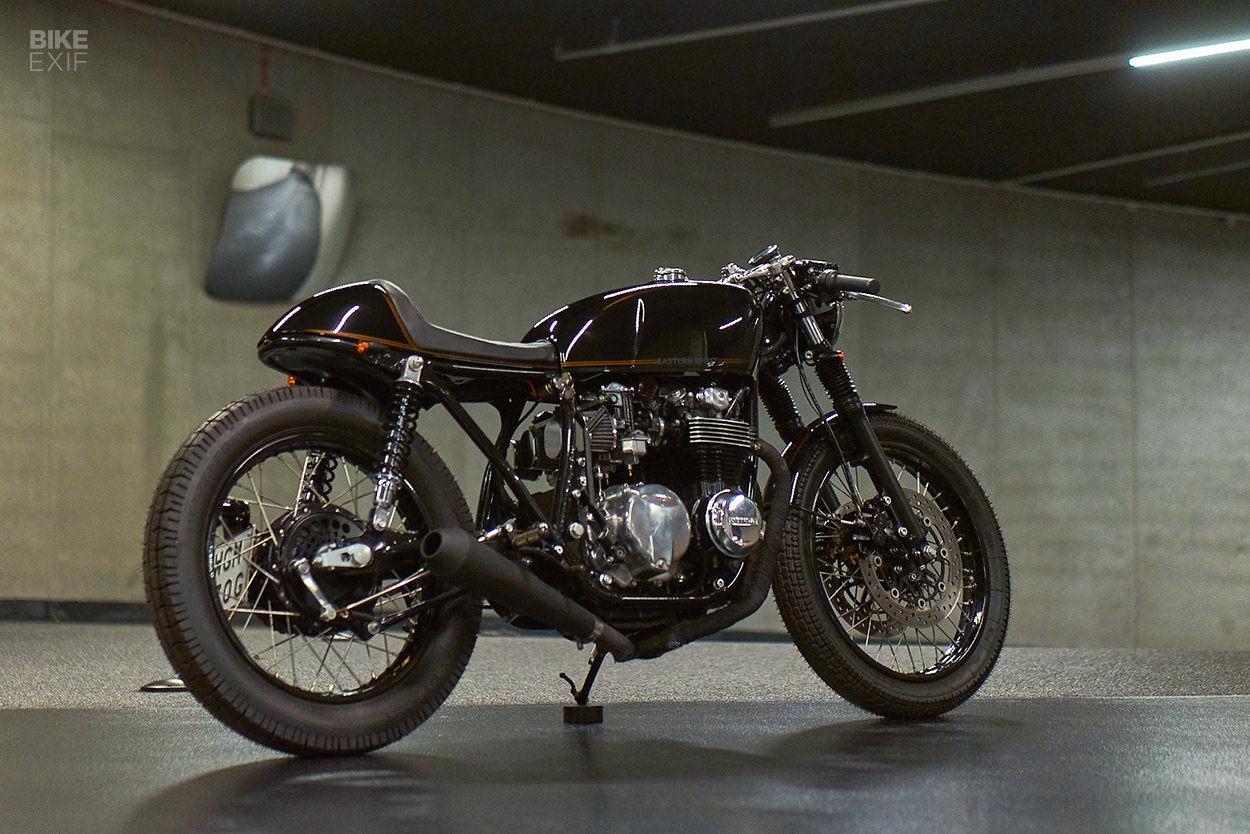 Nearly a decade ago they turned their hands to a 1977 Honda CB550 to hone their chops. It was an admirable effort, and is a great representation of what set hearts aflutter at the time. But it couldn’t hold a candle to what Sylwester and his team can do these days. 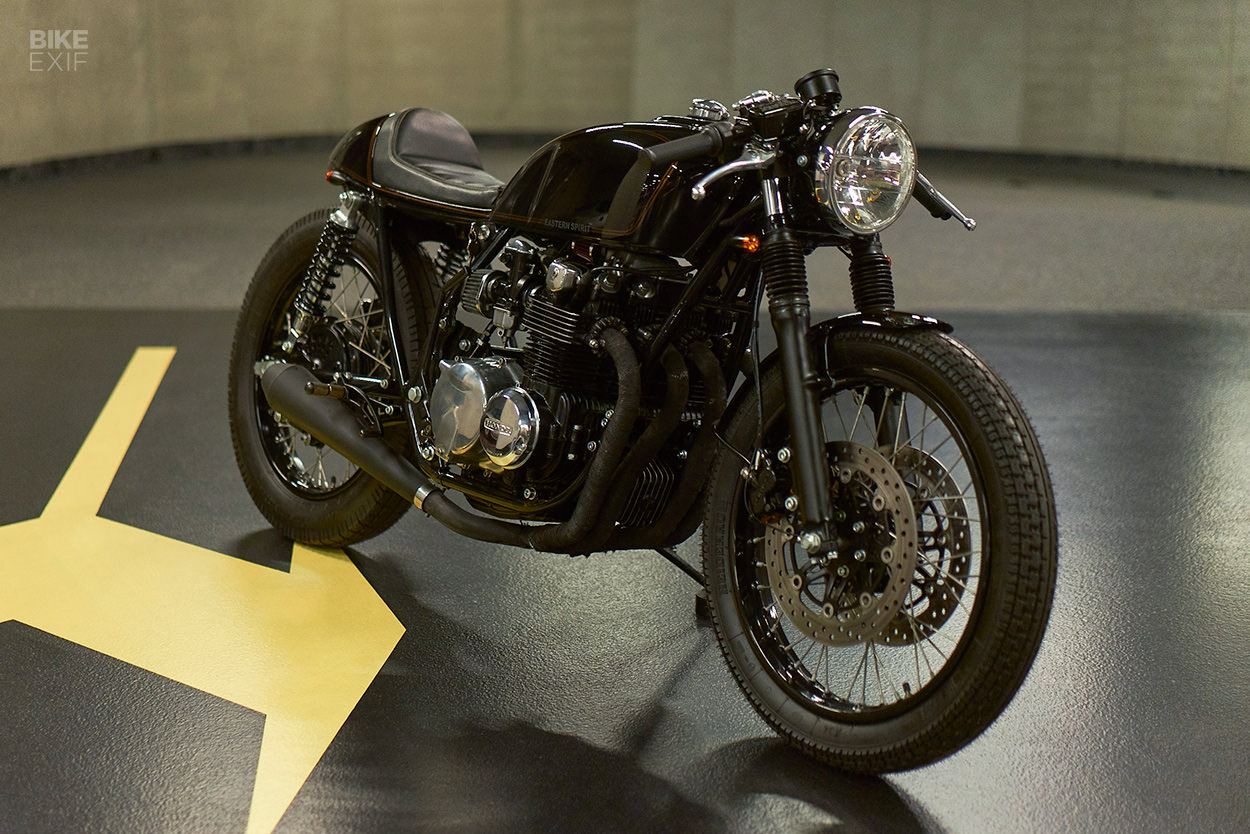 “The Honda was sold to a client who, with a heavy heart, had to resell it,” says Sylwester. “I saw it as an opportunity to give her some love, now that I’m a little wiser and a whole lot more experienced.”

He didn’t want to stray too far from the initial design though. The bike was stripped back to the bare frame, the powder-coat removed and all the welds and brackets reinforced. Some mountings were changed too—chiefly at the front, where the headlight was brought in closer to give the bike a more compact feel. 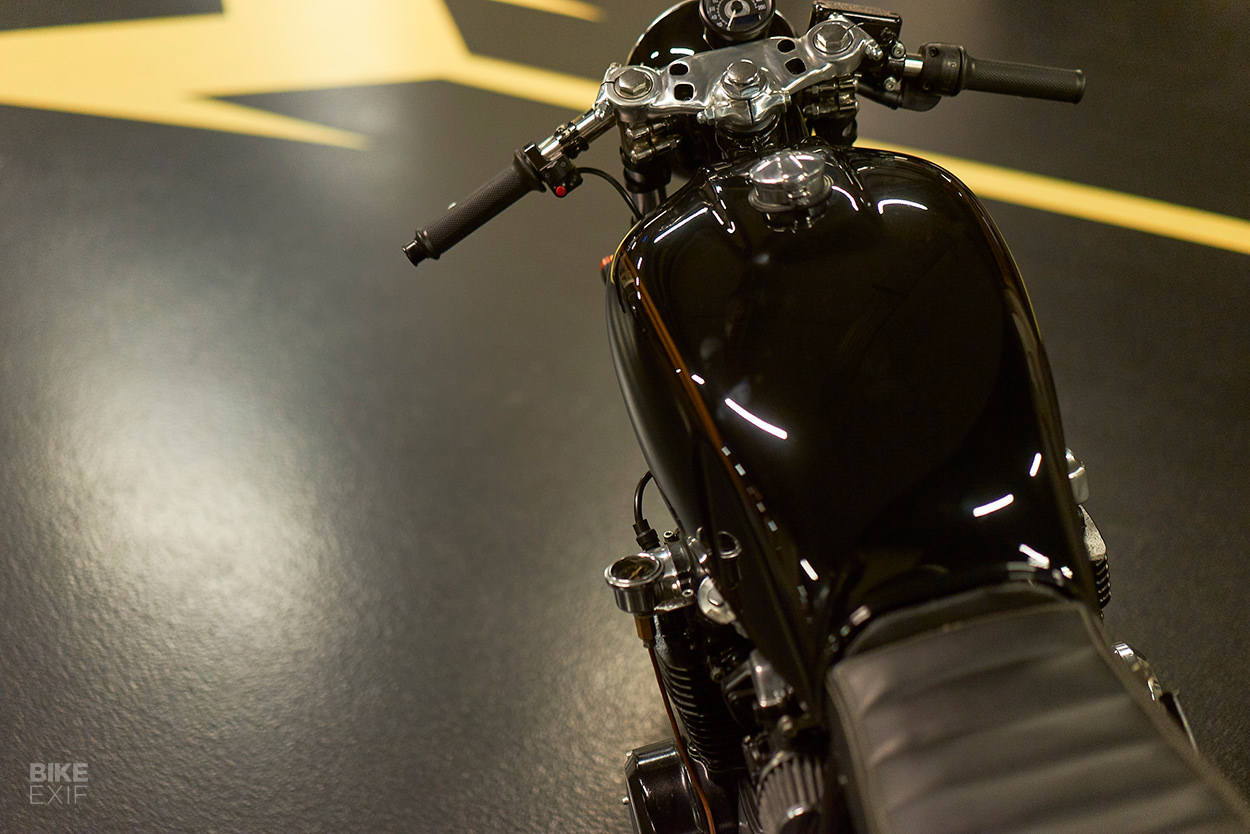 The front suspension was completely rebuilt and now runs into new, beefed-up triple clamps, while the rear was fitted with new shocks. Eastern Spirit also installed a longer muffler, and completely redid the livery. The CB now sports an understated black color scheme with gold and matte black pin striping, more in line with current tastes.

It’s a fascinating look at shifting trends and the up-skilling of a burgeoning custom bike workshop—but it’s also a testament to how eternally good-looking a bare-bones café racer can be. I’ve got a feeling that Sylwester hasn’t finished with the CB550 just yet though, because, as he says, “perfectionism can be a nuisance.” [Eastern Spirit Garage | Images by Mateusz Stankiewicz] 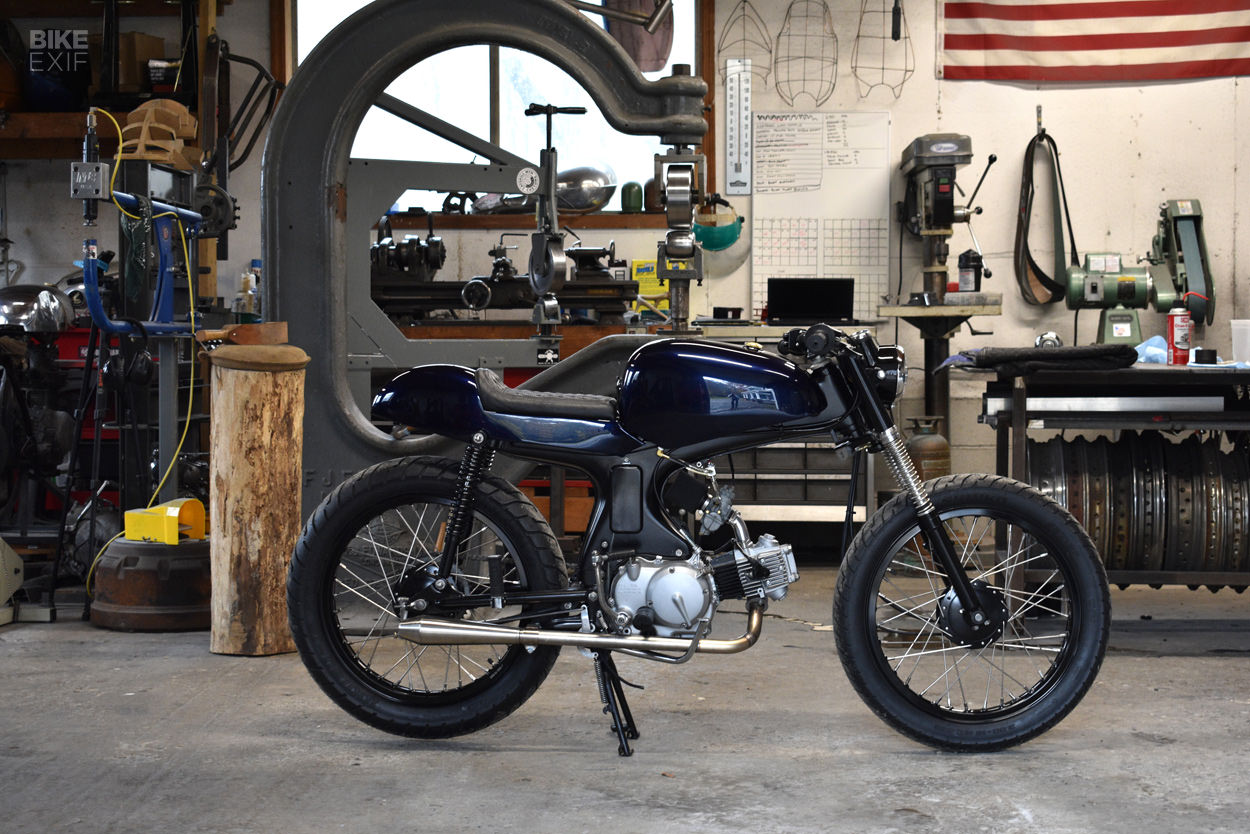 His most recent customer stumbled across Catskill’s website, got in touch and told him the story of his little Honda S90. It was in pretty rough condition and had last been run all the way back in 1984. But it meant a lot to the client, as it belonged to his late father. 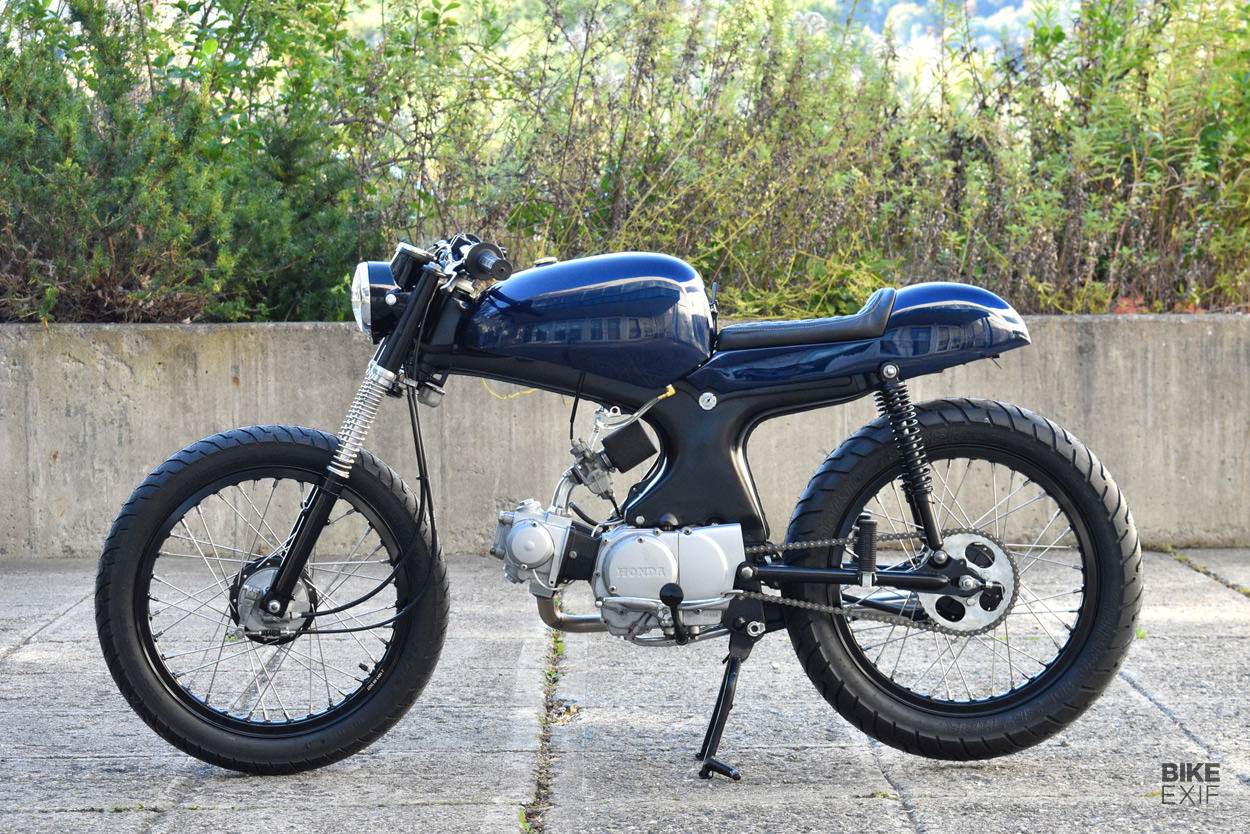 “He told me about how the two of them would ride it when he was a kid,” Nick explains. “And I was asked to restore and customize this little bike from his childhood. He wanted a café racer that he could take up around the block for ice cream.”

Nick pulled the bike down to the frame and running gear and stepped back to take a look. “I quickly realized my biggest design challenge would be working with the funky curves of the stamped steel frame. I always aim to make my bodywork look as if it really belongs on the bike, and a standard flat-bottomed café-style tank and seat would not look like they belonged.” 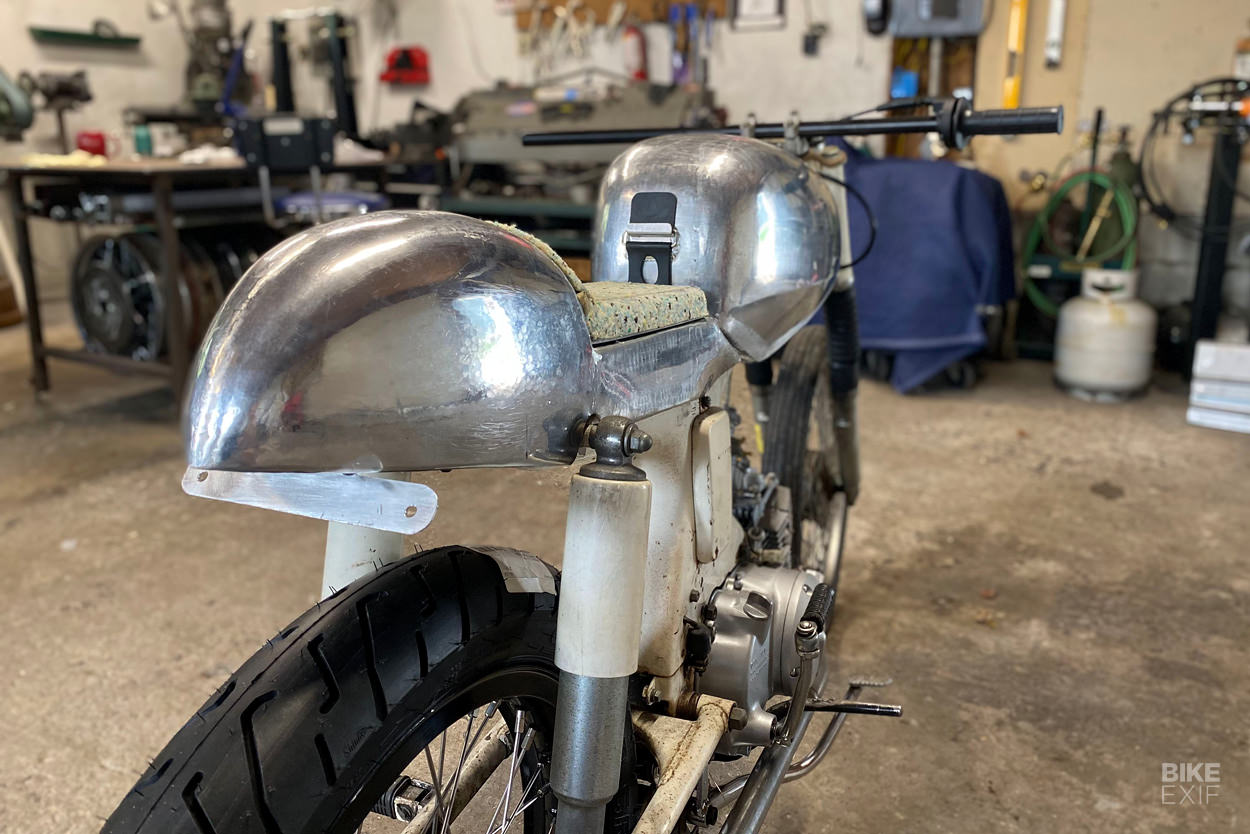 Hand-crafting new bodywork from aluminum, Nick designed the tank so that, from the side, the bottom edge matched the angle of the front of the frame. Out back, the plan was for the lines of the rear frame section to continue into the upswept tail. The design manages to look both distinctive and stock at the same time—the biggest compliment you can give a metal fabricator.

Nick tore down the engine, media-blasted the components and painted the engine casings. It was reassembled with new top end parts, including a new piston, rings, valves, timing chain and a performance camshaft. The carburetor also got cleaned up, and Nick fabricated a straight exhaust header pipe and fitted a reverse megaphone muffler. 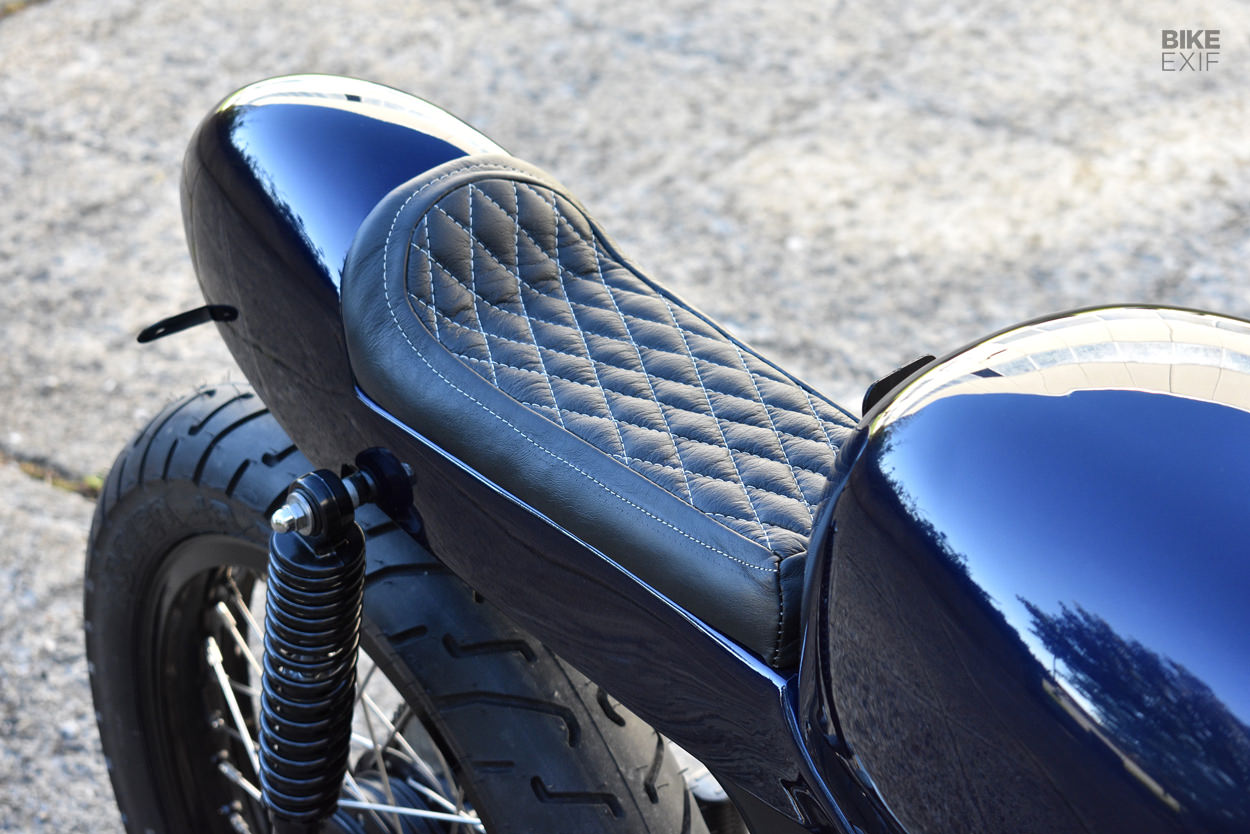 Nick also re-laced the original hubs to larger rims, rebuilt the front forks and installed new rear shocks. And he painted the bodywork himself, built a new wiring harness and stitched the seat. He’s like a one-man band of motorcycle customizing—but without being excruciatingly naff.

He’s also quick to add that the budget was tight on this build so he did more in-house himself than he normally would. Just think: if this little S90 is what he Nick can produce on a limited budget, imagine what he does when he really goes to town? [Catskill Mountain Customs] 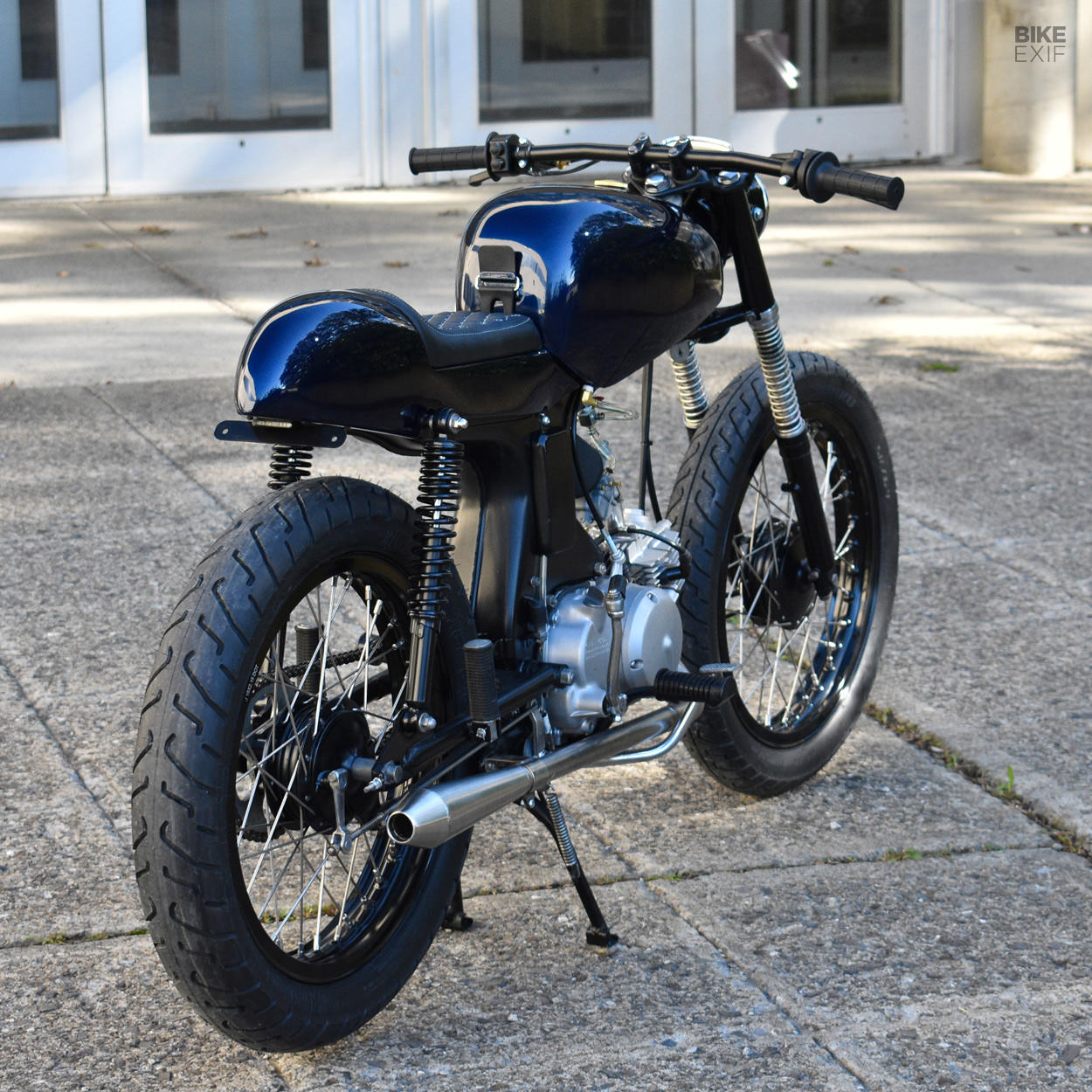