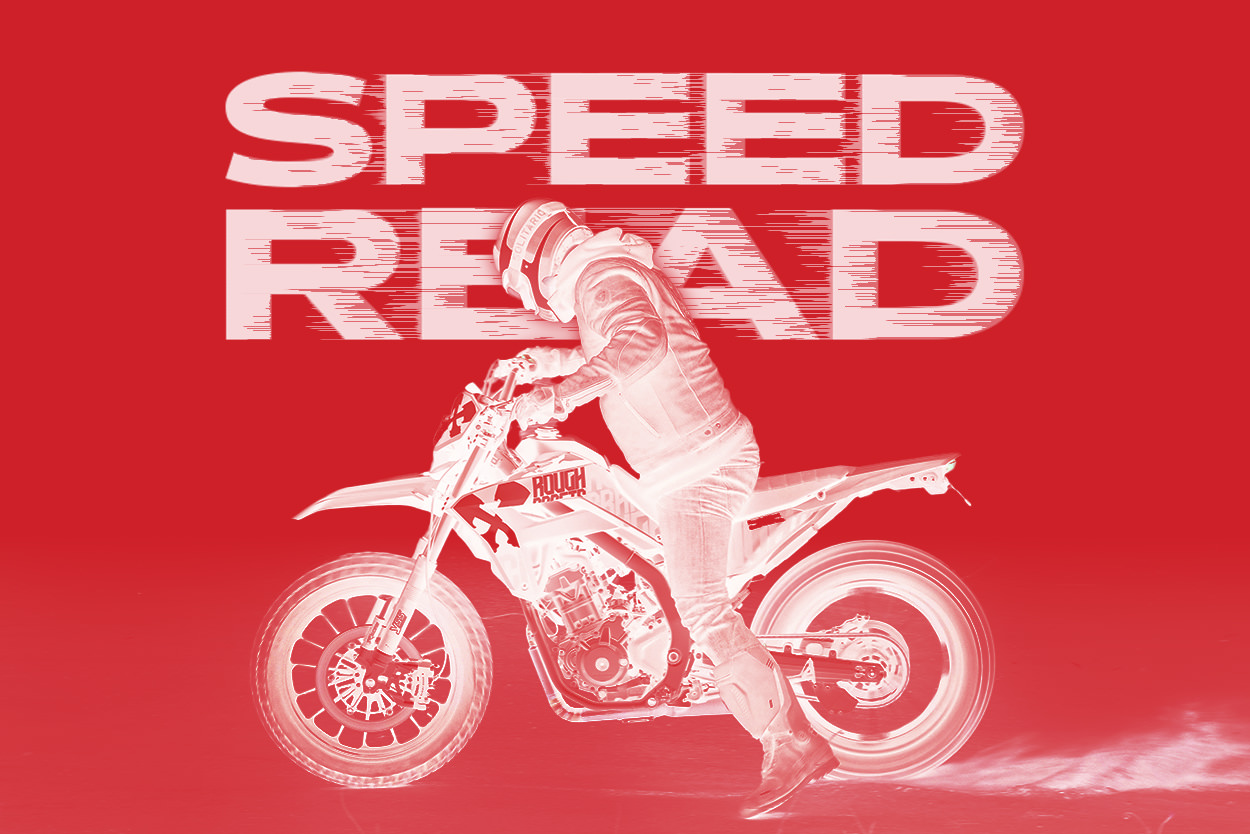 This week’s edition of Speed Read is about as eclectic as it gets. We’ve got a Honda super-commuter from Taiwan, a twin-engined salt racer, a movie recommendation, a futuristic Yamaha XSR155 render and a nine-wheeled Harley motor home. 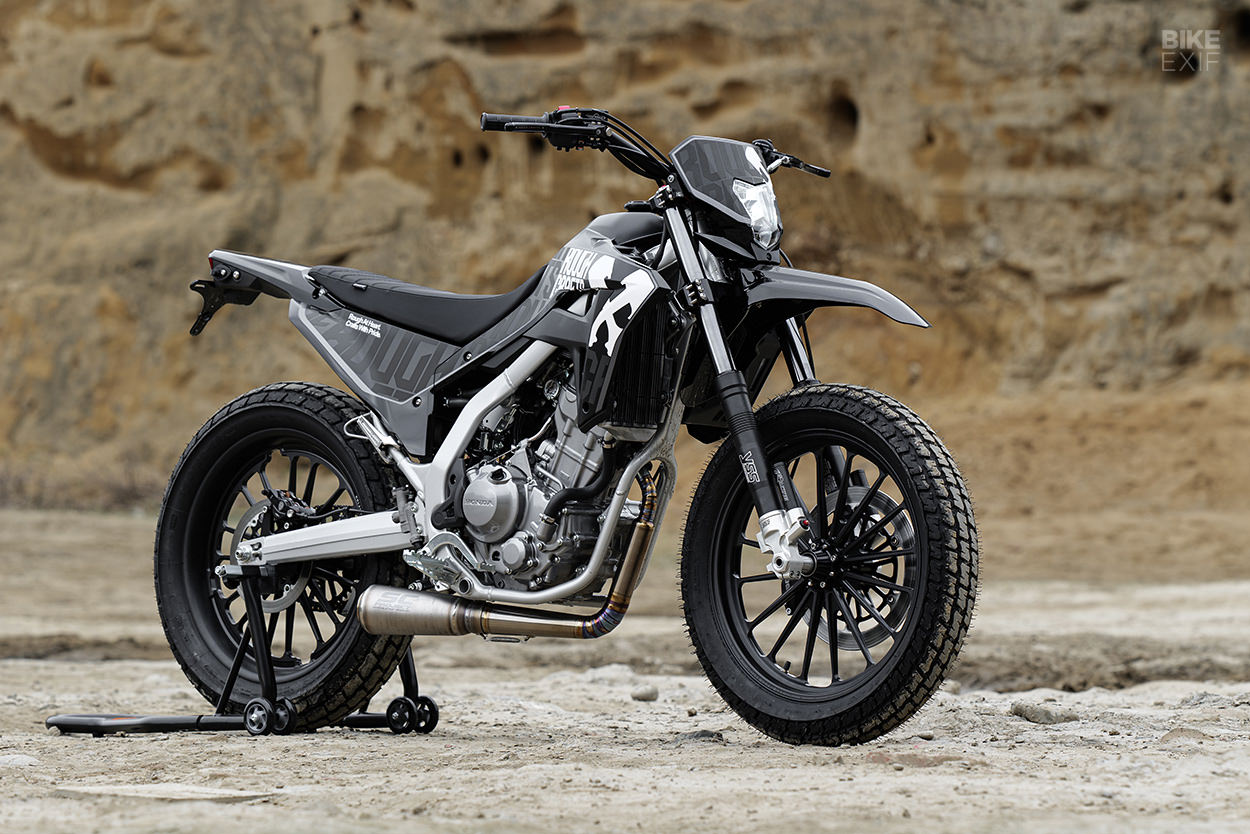 Honda CRF300L by Rough Crafts It’s fun to take a peek behind the curtain and see what custom bike builders choose to ride every day. This week we’ve got a look at Winston Yeh’s Honda CRF300L, a slick little custom that’s perfect for darting about in Taiwanese traffic.

Winston’s custom workshop, Rough Crafts, specializes in sleek, ultra-modern builds with an emphasis on angular bodywork and dark color tones. So it’s no surprise to see it bleed over to his own bike, in a build sponsored by YSS Suspension Taiwan. 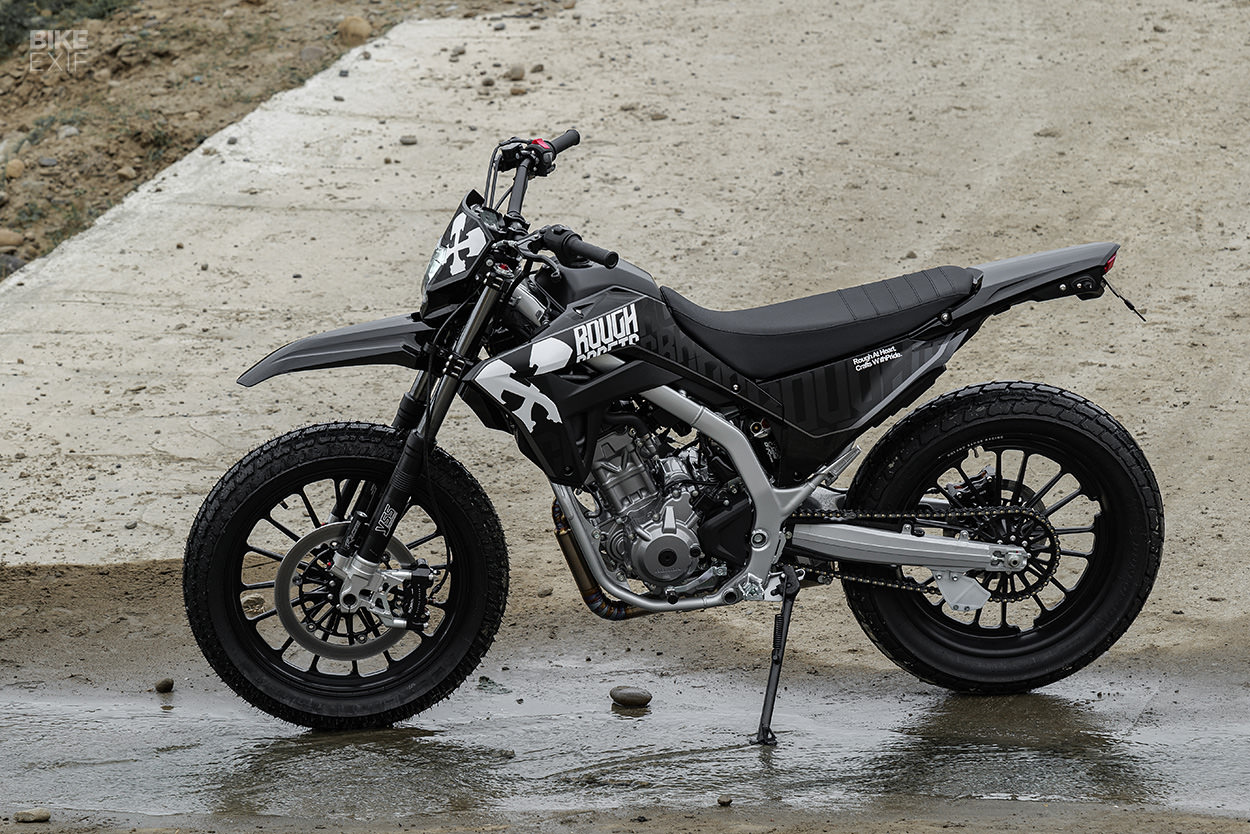 “I think it’s pretty obvious that I’m obsessed with street tracker style,” Winston says. “And growing up in Taiwan, in a tight city full of bikes and scooters, it’s hard not to fall in love with builds that are nimble through traffic, have an upright seating position and nice flat handlebars.”

One of the first things Winston did was switch out the upside-down forks to more traditional ‘right side up’ models. 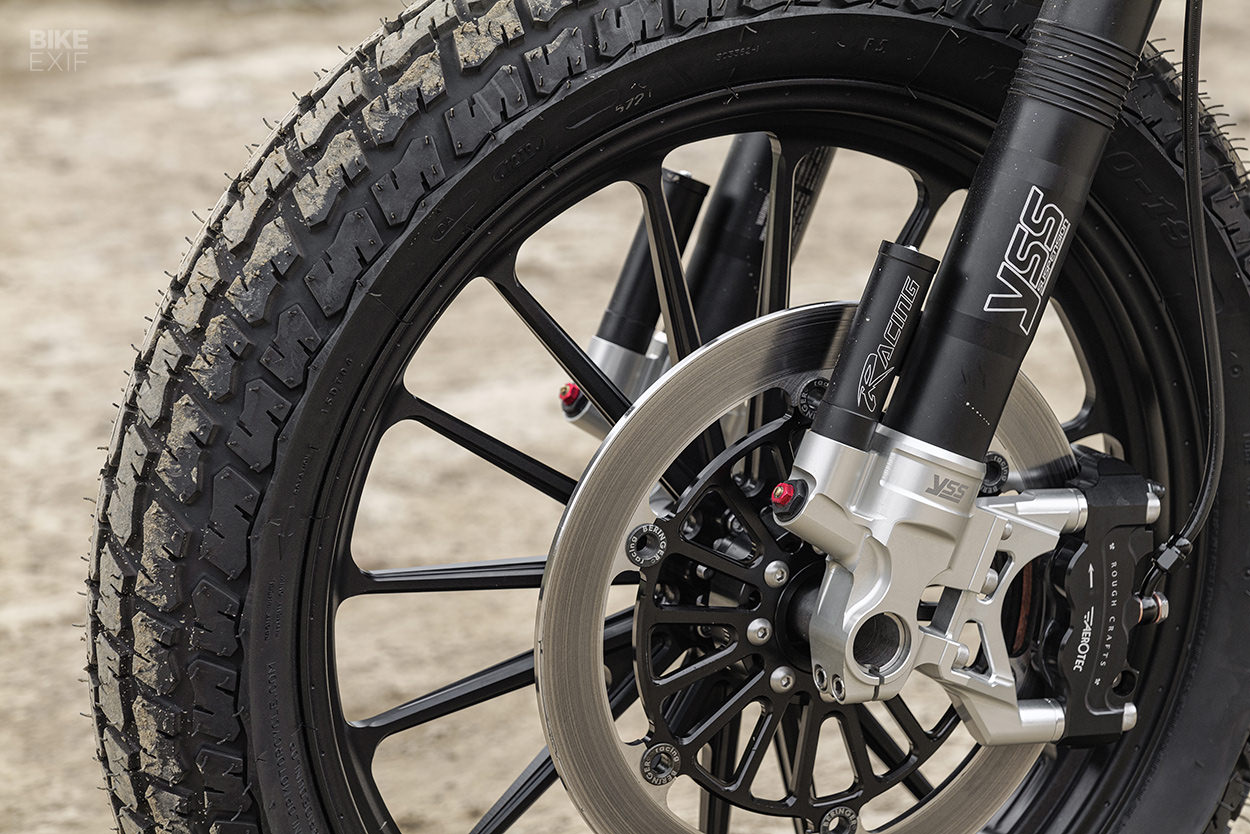 “It might seem odd,” he says, “but I can’t get rid of the image of those legendary flat track race machines, plus YSS Suspension have super cool KG308S forks that come with radial caliper mounts. They’re also fully adjustable—and those front reservoirs are just so tasty looking.”

To help flatten the stance, the new forks were dropped through custom Rough Crafts triple clamps. A YSS shock with a lowering link was fitted out back, and both ends were tuned for a more urban-focused ride. The Honda also now rolls on 19” flat track wheels from Roland Sands Design, with a Beringer brake set. 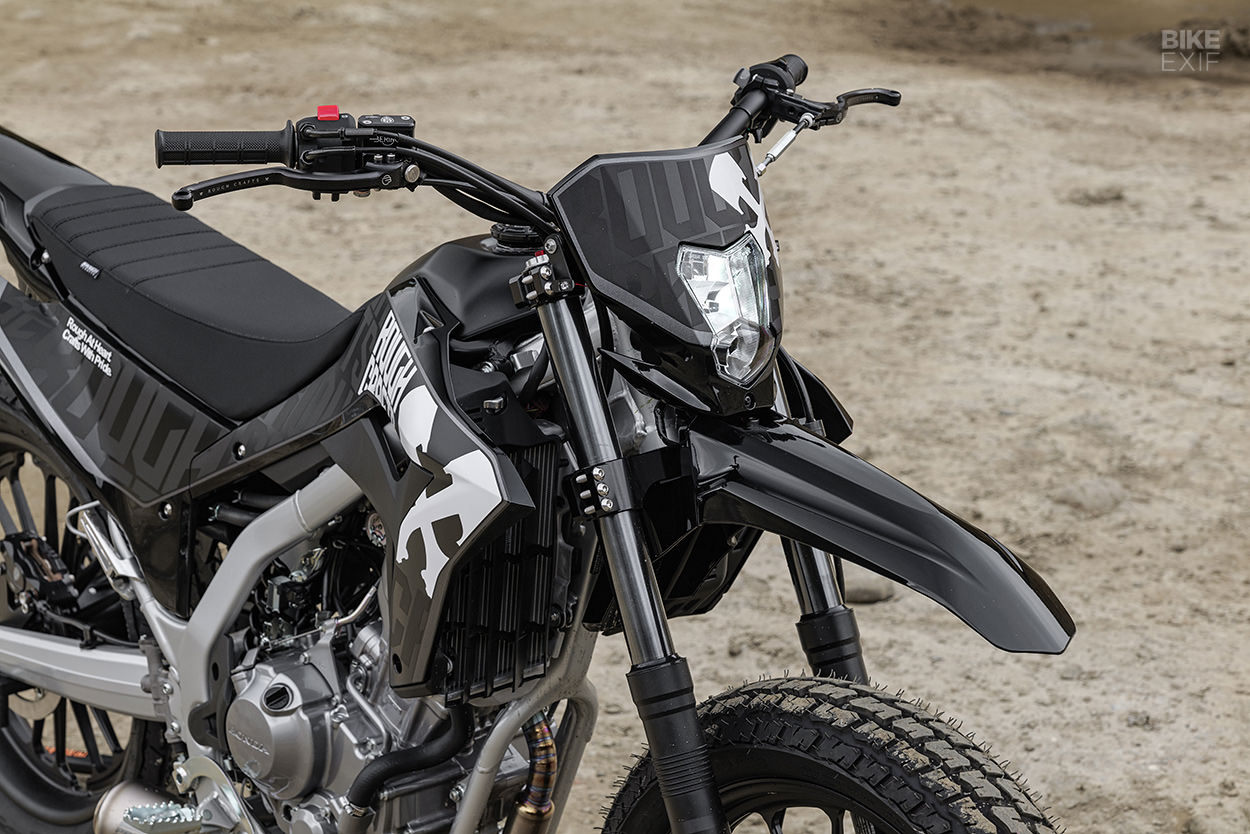 New headlight brackets were fabbed up too, to bring the headlight assembly closer to the head stem. The toolbox was removed out back, while a tail tidy kit from 2 Loud Custom paired with Rough Crafts LED lighting helps trim the rear end down. 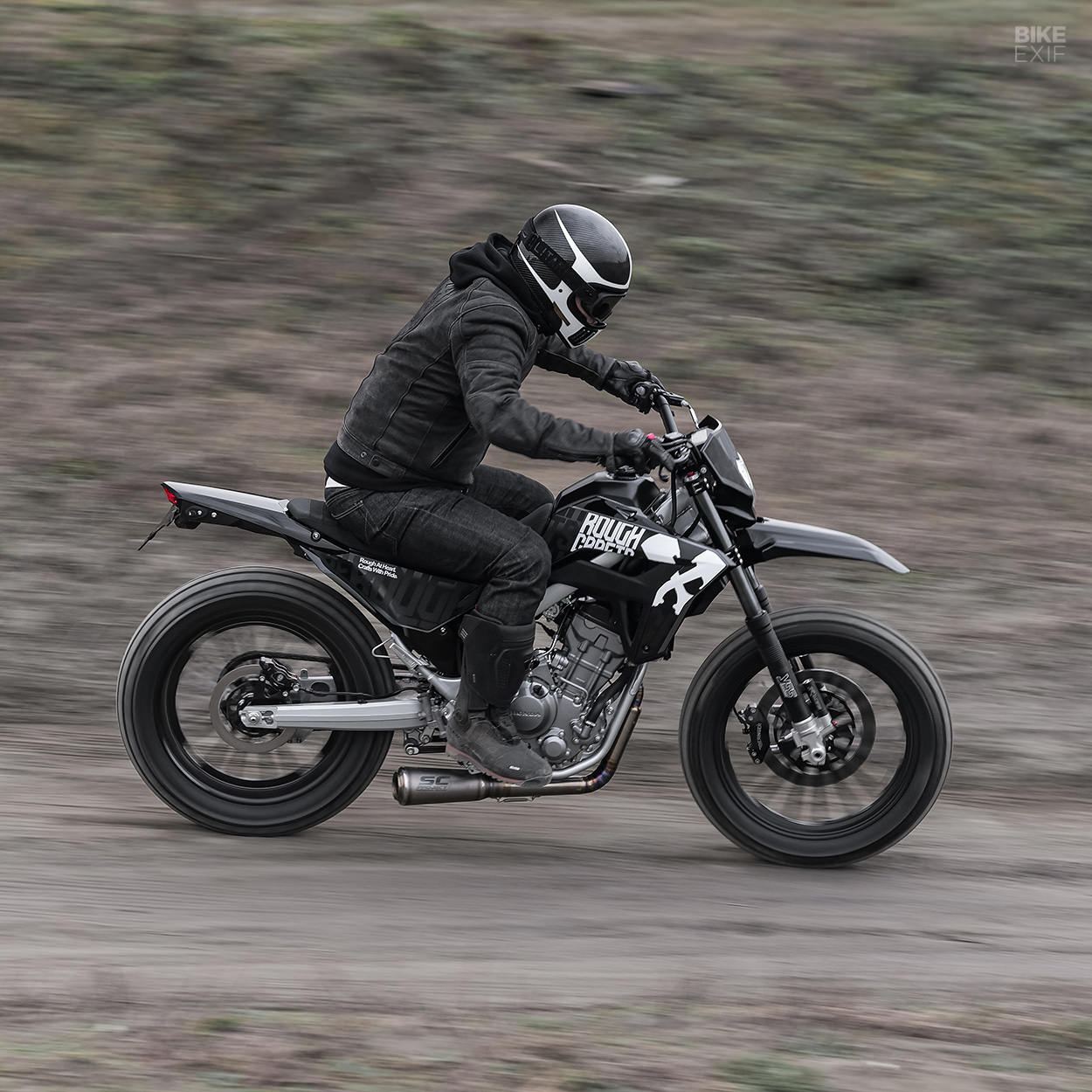 It’s clear to see why Winston chooses to kick about in Taiwan on this gorgeous CRF300L. The thing is striking as all hell and sacrifices none of the real-word reliability and performance the little Honda is quickly becoming famous for. [Rough Crafts] 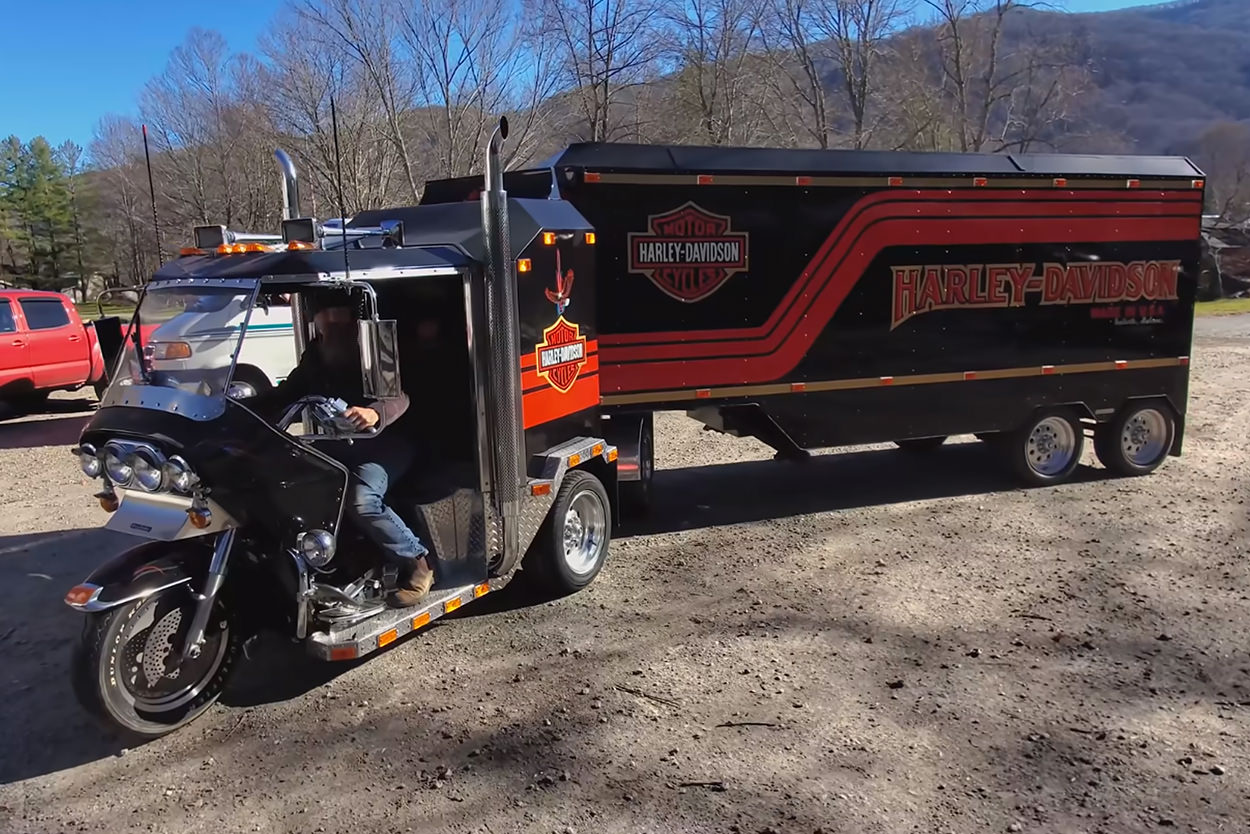 KennyBilt Harley-Davidson camper Hang on tight, as we flip from the eminently sensible to the completely impractical, with the ‘KennyBilt.’ It’s an Evolution-powered Harley-Davidson trike that tows a matching 30 foot camper trailer—proving both that American ingenuity knows no bounds, and that the war on drugs really was lost in the 80s.

This bizarre creation has been purchased by the Wheels Through Time museum in Maggie Valley, North Carolina. The massive facility has hundreds of gorgeous classic motorcycles and cars, with an emphasis on domestic American production. Their goal, echoed in their logo “The Museum That Runs,” is to have every motorcycle and car in their vast collection in serviceable order—and that includes the KennyBilt. 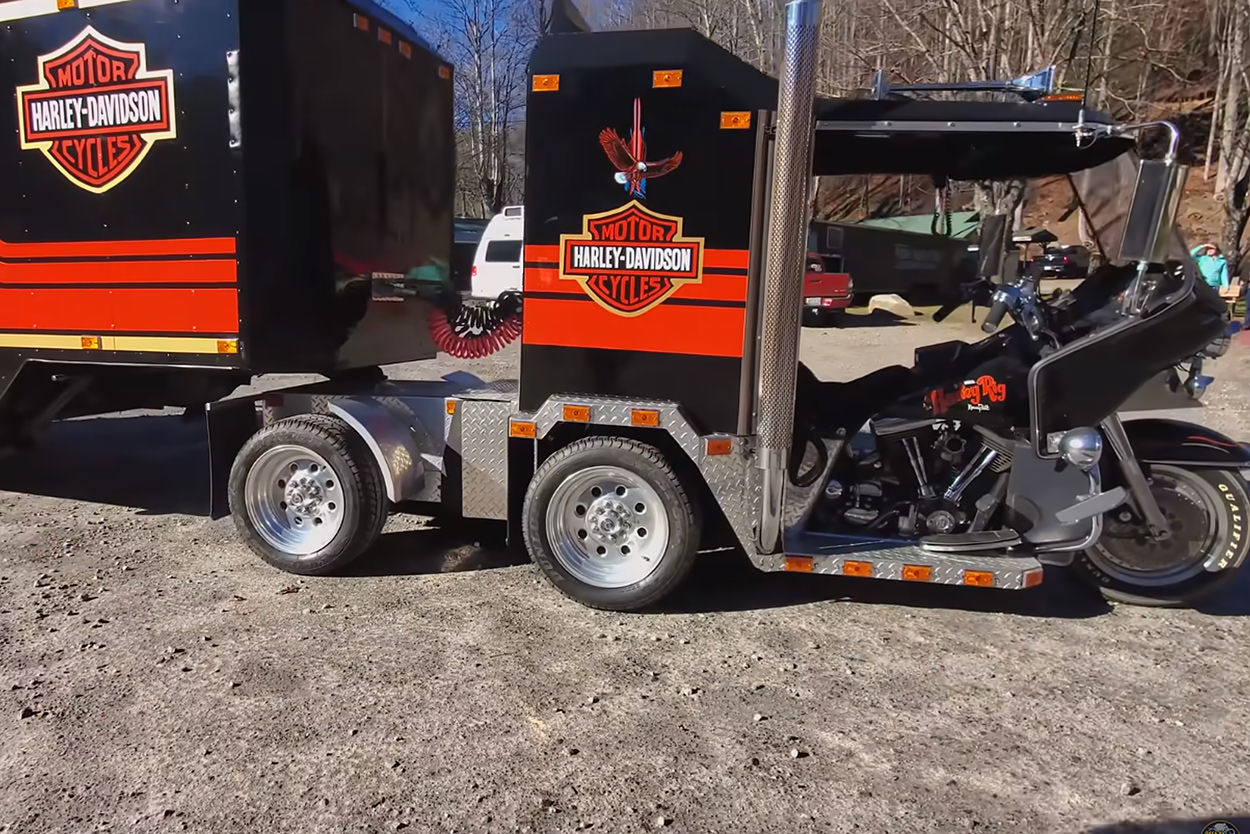 Alabamian Kenny Kilpatrick completed the long-haul rig after a decade of hard work. Astonishingly this wasn’t a completely solo effort by the builder—he had the explicit support of Harley-Davidson, who provided the 1,340 cc engine and gave Kenny their blessing to use their branding.

The front end takes elements from a mid-80s FLT Harley Davidson, with a bench seat taking the place of the sleeping cab. A custom-built trailer follows, with the whole arrangement attached to a double rear axle and double pivot section. Hell, there’s even a pair of working truck-like exhaust stacks.

The Kennybilt toured bike shows around the United States through the 90s and smashed out awards wherever it went before being retired… to a gravel pit. Although the team from Wheels Through Time had some trouble recovering the 4,000 pound rig, they managed to get the KennyBilt thumping along again.

So next time you’re heading through North Carolina and have a hankering to genuflect at the altar of Harley Davidson, waste no time in checking out one of the most striking blends of rebel lifestyle and 90s-laminate RV living we’ve seen. [More] 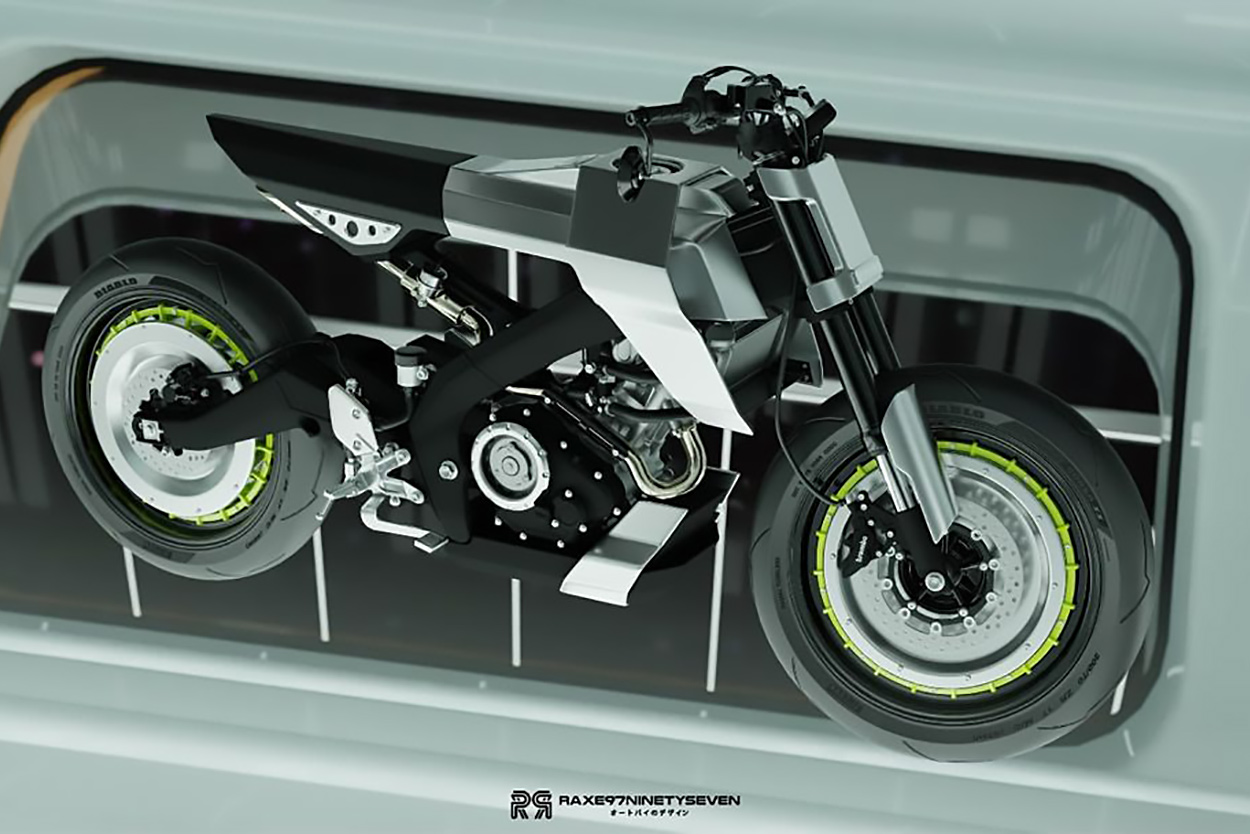 It might surprise many Western readers to know that there’s a diminutive brother to the XSR900 and 700 series we’re familiar with. Often seen throughout South East Asia, the neat little XSR155 is a snappy commuter that takes in the same styling cues as its older brethren. 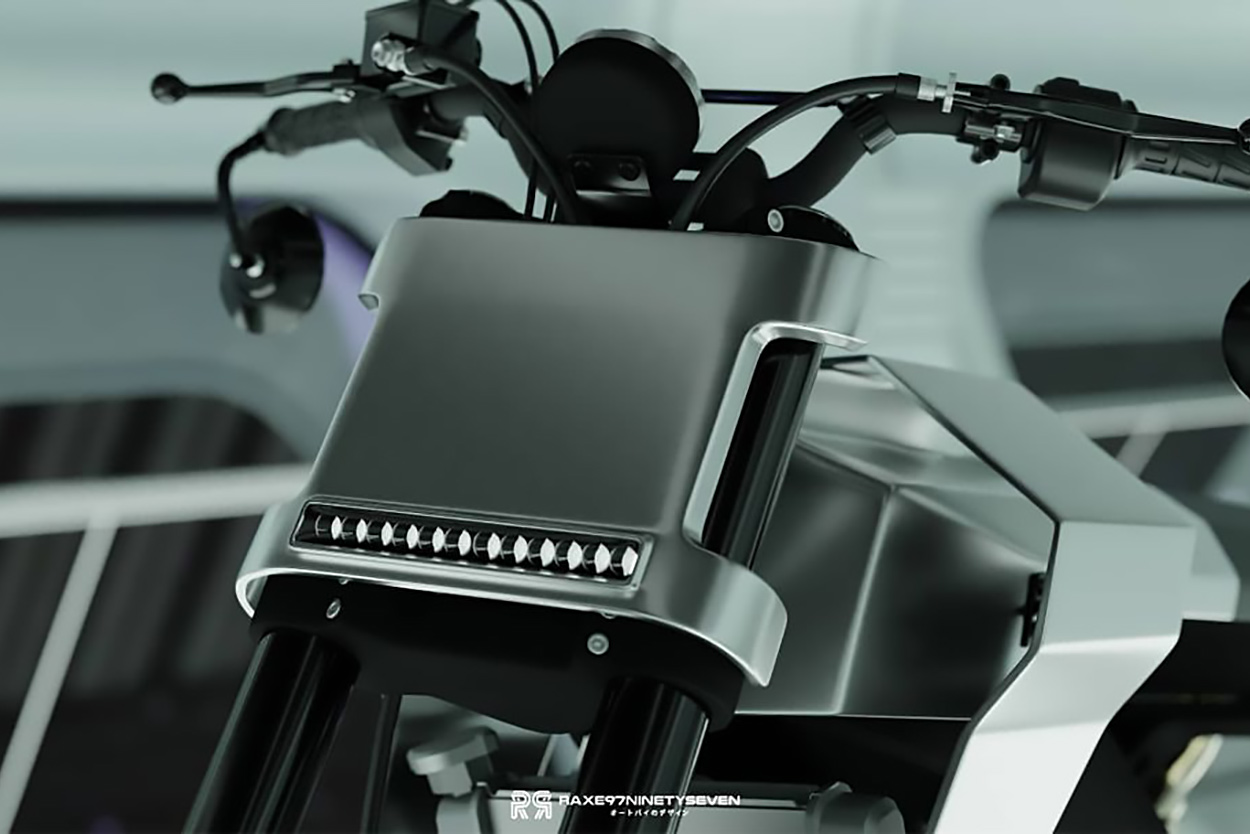 So it makes sense that during the latest ‘Yard Built’ round of customization, Yamaha Indonesia focused on one of their most popular models—and PapnMam Modified took up the challenge.

Working from renders by RAXE97NINETYSEVEN, the team are aiming for a futuristic flat track concept. They’ve really pushed the limits of what you can do to a stock bike, with the Yard Built series not allowing any frame cutting or shutting. But despite this, virtually nothing is recognizable from the standard model. 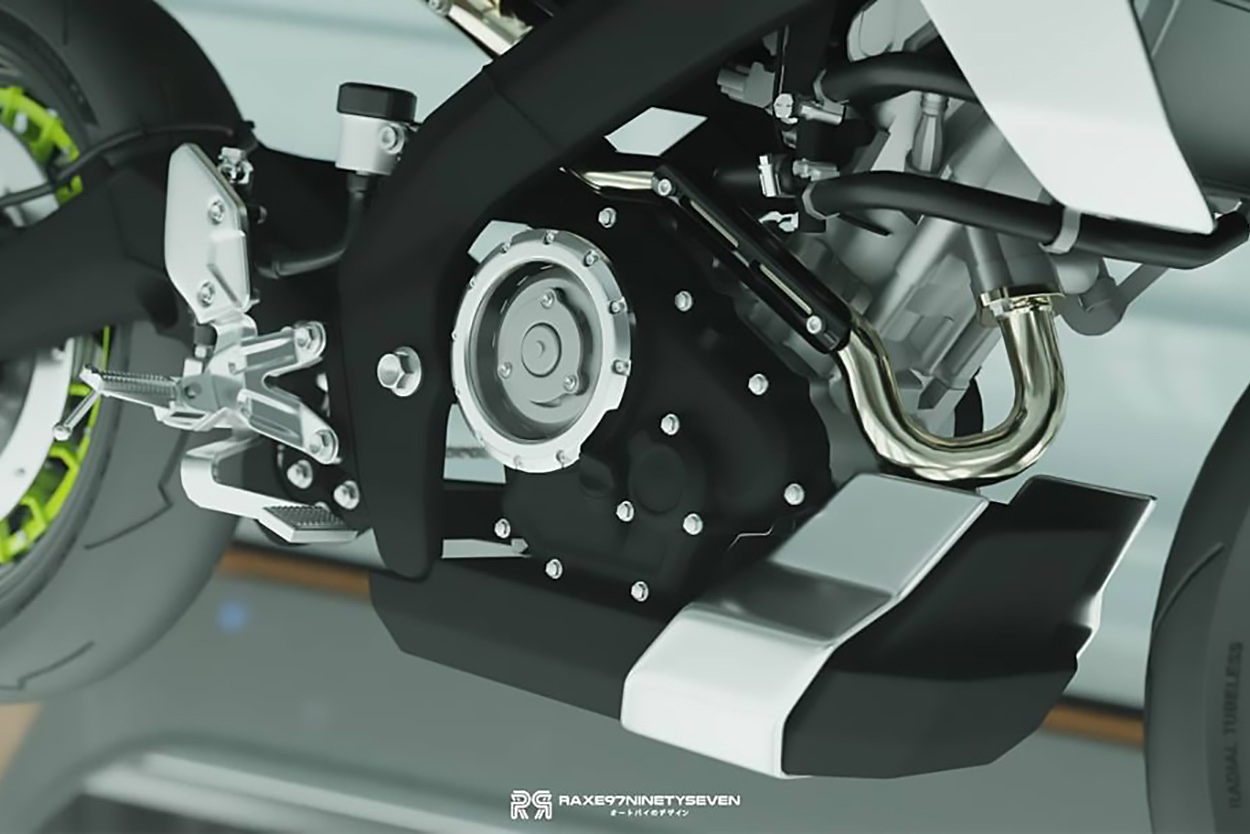 The bodywork has been completely removed and a new rear subframe designed, to hold up an ultra-slimline seat unit. The new angular tank and belly pan draw the eye to both elements, while somehow managing to hide the little liquid-cooled engine underneath. It’s not going to be a multi-day commuter, but nor is it designed to be.

At a quick glance, the XSR almost looks like a custom electric bike, which is a truly exceptional bit of design work by the Indonesian workshop. It’s being built as we speak, and we’re eagerly anticipating how close to the mark they’ll get it. [More] 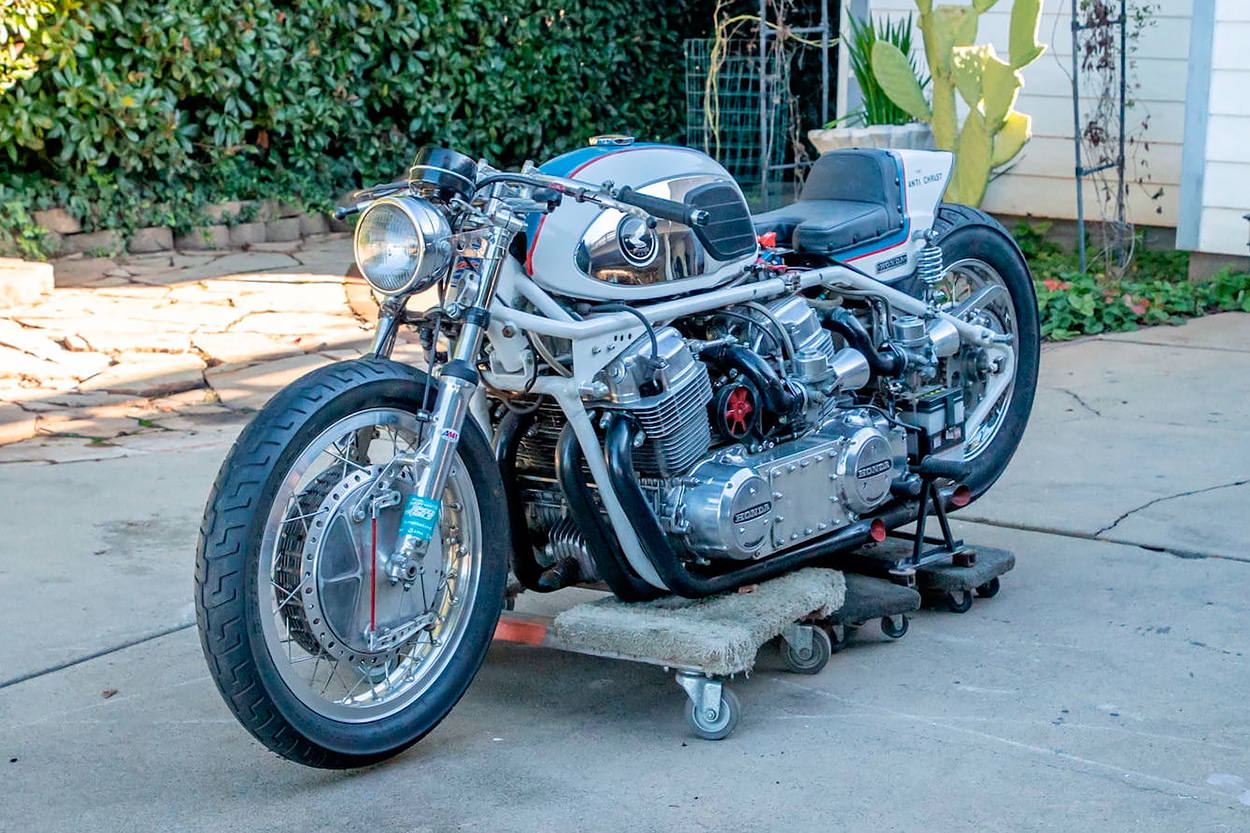 The Anti-Christ by Bob Guynes Capping off this week’s custom bike highlights is a twin-engined Honda CB750 racer, designed and built by the late, great Boris ‘Bob’ Guynes of Redding, California. It’s part of a collection that’s being taken to auction by his son, after Bob’s passing late last year.

While we’re sad to hear of Bob’s death, we’re gladdened to think that this one-off racer will go to a good home. It’s a fitting capstone to his incredible life, with Bob being an army veteran, celebrated fabricator and successful professional model maker, with his work appearing in films such as Das Boot. 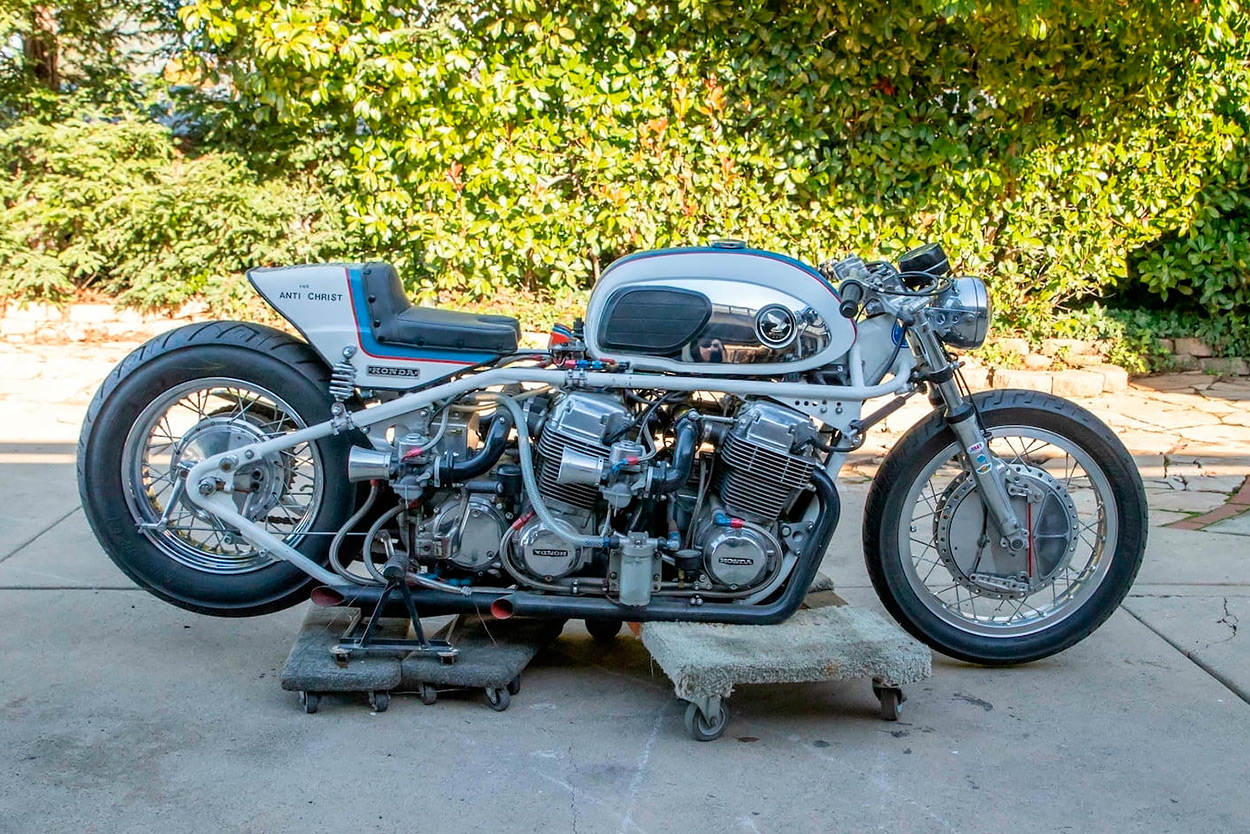 He spent much of his early life racing, having competed at events as diverse as the Isle of Man and the Bonneville salt flats. But as he aged he increasingly focused on his fabrication work, letting younger riders take his creations to the track. His twin-engined CB750 salt racer is the acme of his craft and a perfect example of the purpose-built racers he made that sacrificed neither speed nor striking good looks. 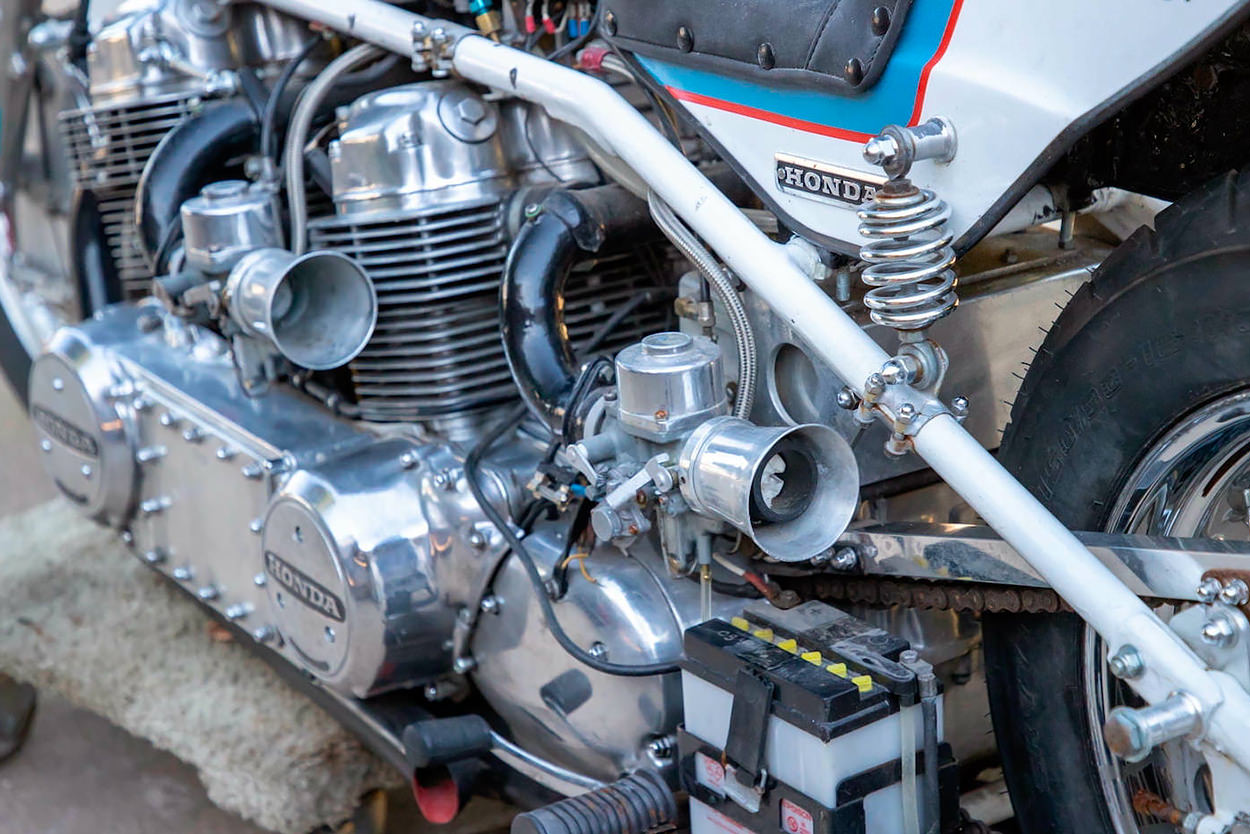 Details on the bike itself are limited, but we can tell you it’s two 1972 CB750 engines linked by their primary drive. It runs a dry sump oil system with externally-mounted breather, outboard-mounted carbs with velocity stacks and straight-through exhausts. The tubular steel hardtail frame is entirely scratch built, and features some of the tightest exhaust-to-downtube clearances you’re likely to see. 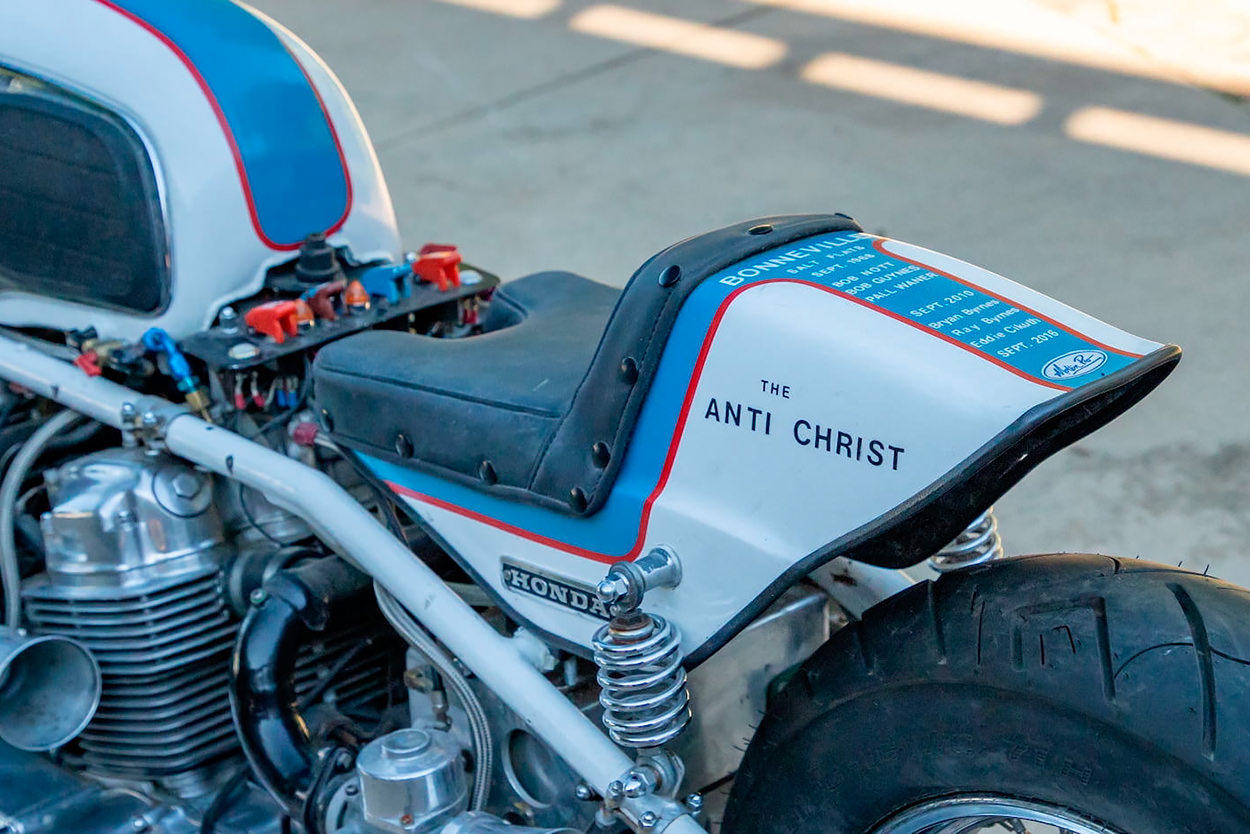 Tipping the scales at over 1,000 pounds, it was raced by Ray Byrne who sadly passed away some years ago. When speaking to the Mecum auction house, Bob’s son, Lawrence, explained the Anti-Christ was, as much as anything, a statement piece designed to show Bonneville that he “wasn’t mucking around.”

If this or other salt-racing bikes with a real pedigree tickle your fancy, you can join the no-reserve auction that kicks off later this month here. [More] 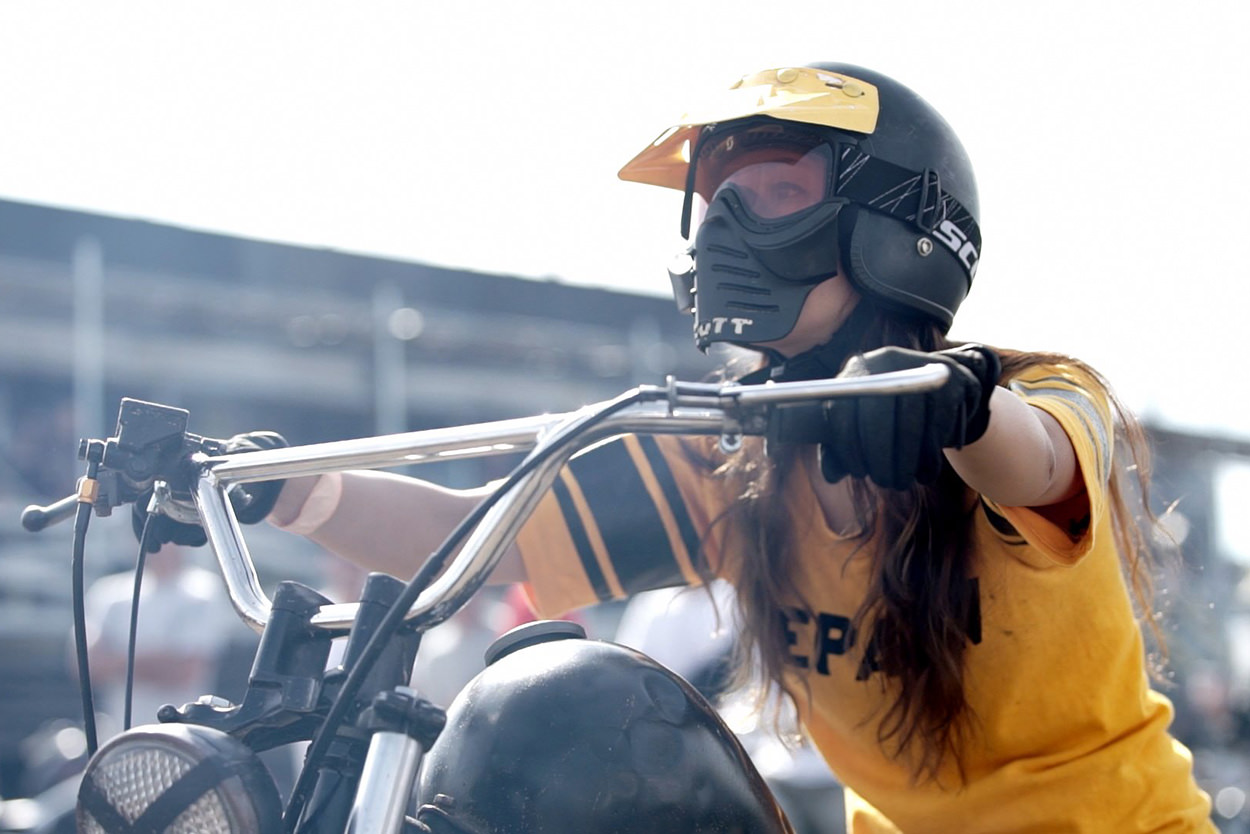 The Roost film Locked down and looking for some killer entertainment? We’ve got just the film for you. It’s called ‘The Roost’ and it’s a Japanese production that’s just finished its two year festival run, and is now available for streaming online.

If you’re into the Japanese custom scene, it’s a must-watch. Hell, if you’re into custom bikes at all it’s worth a look, as Japan produces some of the most talented customizers in the world—a select cabal of gifted individuals that set trends the rest of the world follows.

The Roost focuses on a few of the most influential Japanese builders on the scene today. That includes established players like Kengo Kimura from Heiwa Motorcycles, and newer builders like Toshi Nakajima.

We’ve been lucky enough to cast an eye over it and it’s a damn good watch. There’s mountains of cool footage of some wild custom rides and oodles of people throwing vintage bikes around off road. And it’s not all SR400s and W650s—there’s mountains of patina-riddled old single BSAs, 60s Triumph twins and all sorts of coolness being chucked around, all set to a pretty neat soundtrack. 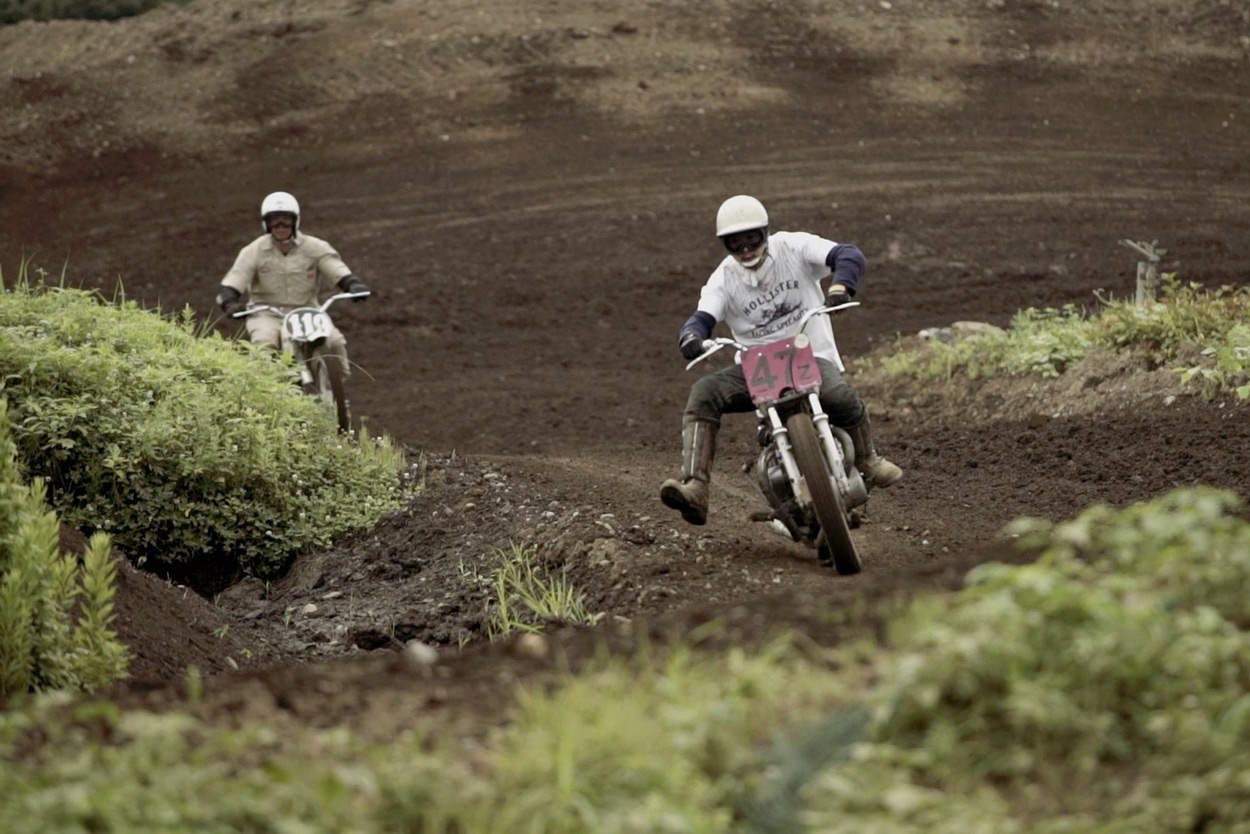 If this sounds tempting to you, The Roost is available on the Toronto Motor Film Fest (TMFF) video on demand channel. Grab a beer, grab some mates and settle in for some of the best-shot, best-sounding custom bike footage we’ve seen in a long time. [The Roost | Watch]