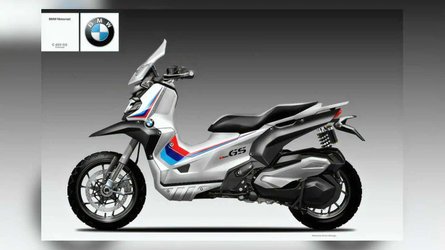 Here in the back half of 2021, we haven’t quite reached the point where adventure-styled scooters are the norm. The Honda X-ADV notwithstanding, most other scooters—even in the maxi-scooter class—aren’t 750cc giants. Still, Honda brought out the ADV 150, Kymco introduced the DT X360, and Yamaha launched the tough-looking little BW’S in fairly recent time. It’s a micro-niche, but it’s growing.

That said, we also know that BMW has been hard at work bringing the production version of its first electric scooter, the CE-04, to market. However, as is always the case with major OEMs, one hand is in the present while the other is working behind the scenes on future vehicles. So far, the Motorrad hasn’t announced any plans to discontinue the C 400 X piston-powered scooter, which it currently sells.

One of our favorite moto concept designers, Oberdan Bezzi, came up with his interpretation of a possible C 400 GS toward the end of 2020. That’s basically right in line with the timing other OEMs used for launching their adventure scoots into the world.

Now, if BMW was to actually consider offering a GS-styled C 400 scooter, 2021 would arguably have been the best year to do it. After all, it’s the 40th anniversary of the GS series all year long, a fact which BMW has proudly been celebrating with special 40th anniversary liveries up and down its current-model-year offerings.

Still, as a styling exercise, it’s pretty promising. While we admittedly have a soft spot for that BMW tricolor, the regular C 400 X has some pretty important features that we wish more piston-powered, comparable maxi-scooters had. I mean, decent brakes and zippy throttle response seem pretty ideal on any commuter-focused vehicle, don’t they? Adding in that sweet ADV styling and offering a GS-styled variant seems kind of like a no-brainer.

Even if the actual scooter’s off-roading capabilities are extremely light at best, we could have a discussion all day long about style versus substance in terms of ADV motorcycles. The idea that the same argument could carry over to maxi-scooters, therefore, isn’t surprising.

You’re always going to have some people who want to spend more time off-road than on, and some other people who like ADV styling but prefer to keep out of the dirt as much as possible. You know what? As long as both of those types of people like to ride, I don’t see why that should be an issue. Go outside, ride, and have fun. If there’s already a G 310 GS, why can’t there be a C 400 GS a la Oberdan Bezzi for scooter-lovers, as well?

Watch A Master Fabricate A Titanium Exhaust For A BMW R100RS

Rare Kannenberg Collection To Go To Auction This September