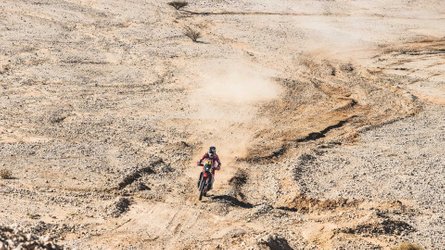 After a much-needed rest on Saturday, January 8, 2022, competitors in the Dakar Rally got back to business with Stage Seven the next day. The day started full of promise and potential for competitors, but of course, ended better for some riders and teams than others. Sadly, GasGas Factory Racing’s Daniel Sanders had a crash that injured his elbow, causing him to withdraw completely from the 2022 Dakar Rally after fiercely competing at the front during the early stages.

Stage Seven brought good news for Yamaha’s Adrien van Beveren, who found himself in the overall lead in the motorbike class at the end of the day. Coming back from an injury is tough, but this Dakar veteran told NBC Motorsports that he definitely felt more confident after achieving such a good result. Meanwhile, Honda rider Jose Ignacio “Nacho” Cornejo took his first Dakar 2022 stage win—which was also his third Dakar stage win ever in his personal riding history.

What of possibly one of the most-watched Dakar 2022 rookies (at least in the bikes), Danilo Petrucci? He’s quite fast when he knows where he’s going, but he’s still working on honing his overall navigation skills. That means he tends to perform better when he’s able to follow in other riders’ tracks, rather than setting out first on a stage, as he did after having won his first-ever Dakar Rally stage a few days ago. Stage Eight saw him finish in 25th place.