Same Driver Hits One Rider And One Bike, Doesn’t Stop 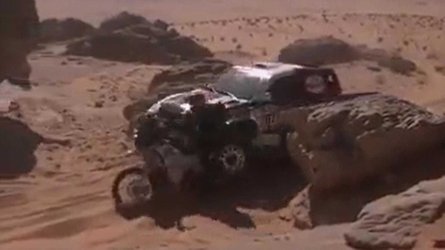 Giniel De Villiers is an extremely experienced Dakar competitor. The Toyota Gazoo Racing driver has so far contested Dakar Rally events every single year since 2003. Even more impressively, he’s completed all of them without a single retirement. You could say this guy has a pretty good idea of what he’s doing.

That makes it all the more inexplicable that De Villiers was involved in not just one, but two separate incidents with motorcycle riders also contesting Dakar 2022 in their own class. Now, crashes are certainly not uncommon during every year’s Dakar, and usually competitors will help each other out when they happen. This, though, was something different.

On Stage 1B, rider Cesar Zumaran was trying to restart his KTM, shielded partly by surrounding rocks. According to De Villiers’ own accounting to the Dakar stewards later on, “It was on a trial section with sand and big rocks. I was riding slowly and saw the rider on the left. I was driven to the left and hit the rider and he fell. I went back a bit. The rider stood up, waved his arm and that was the signal for me that he was okay and that I could pass. I passed the bike and didn’t want to stop because the sand was very soft there. I didn’t want to get myself stuck,” reported our colleagues at Motorsport.com.

We clearly weren’t there when it happened, but this video of the incident doesn’t make it seem as though Zumaran waved De Villiers by. Stewards said that Zumaran was unhappy with how De Villiers treated the incident, which appears evident from his body language. Stewards later slapped De Villiers with a five-minute penalty for the Zumaran incident.

However, that apparently wasn’t the only questionable event involving De Villiers and a bike rider during Dakar 2022 so far. The very next day, during Stage Two, rider number 163 (Morocco Racing Team rider Mohamedsaid Aoulad Ali) had a fall behind a dune near kilometer 180. As he attempted to maneuver his bike back into an upright position, he heard a car approaching. He got himself out of the way, and the car crested the top of the dune and landed on the bike, reportedly causing major damage to the bike.

Ali said he could not read the number of the car, but telemetry confirmed that it was De Villiers. This appears to be the second known incident where De Villiers did not stop to see if the rider was OK. FIM stewards have reportedly passed this matter off to the FIA stewards for further investigation of the incident.

After Dakar, Is Danilo Petrucci Headed To MotoAmerica In 2022?