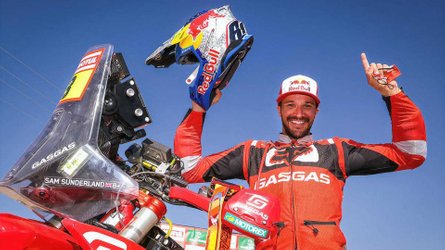 Stage 12 of the 2022 Dakar Rally dawned with promise for the top runners in the motorbike category. Indeed, the three riders who would go on to take the podium on Stage 12 all finished within 30 seconds of each other—and that’s just one example of how closely competitors vied for places throughout the two-week event.

Still, in the end, there were winners—both of the stage, and of the entire 2022 Dakar Rally motorbike category. Honda’s Pablo Quintanilla took the top step of the podium for Stage 12, followed by KTM’s Toby Price just 18 seconds behind him in second place, and Honda’s Nacho Cornejo a further 11 seconds behind Price in third. Top 2022 rookie rider, Bas World KTM’s Mason Klein, came in fifth place on the stage—and only 1 minute and 23 seconds off the winning pace. Klein, who is a 20-year-old American racer, will definitely be worth keeping an eye on in future events.

At the end of the day, it was GasGas Factory Racing’s Sam Sunderland who took home the overall 2022 Dakar Rally win in the motorcycle category. Second place went to Pablo Quintanilla, and third went to KTM’s Matthias Walkner. Mason Klein came in ninth in the overall rankings, which is extremely impressive for the rookie.

The top three riders in the Original by Motul category—that’s riders without support, who maintained and repaired their own bikes throughout the event—were Lithuanian rider Arunas Gelazninkas, Czech rider Milan Engel, and French rider Benjamin Melot. Although these riders don’t get the same attention that the big factory efforts do, riders in this category keep the heart and soul of the Dakar Rally alive every year.

What about former MotoGP racer Danilo Petrucci? If you’re wondering how he fared, never fear—he did indeed meet his previously stated goal of completing his first Dakar in 2022. He finished 34th on Stage 12, and 90th overall after coming back as a wild card following his technical mishap on an early stage in the 2022 rally. Petrux said he wants to compete in future Dakar rallies, so let’s hope we get to see what he can do with the benefit of more experience in rally raids.

As always, congratulations are in order to everyone who worked together to make the 2022 Dakar Rally a success—and to everyone who finished, in general. We hope everyone gets some much-needed rest after the past couple of weeks, and look forward to next year.