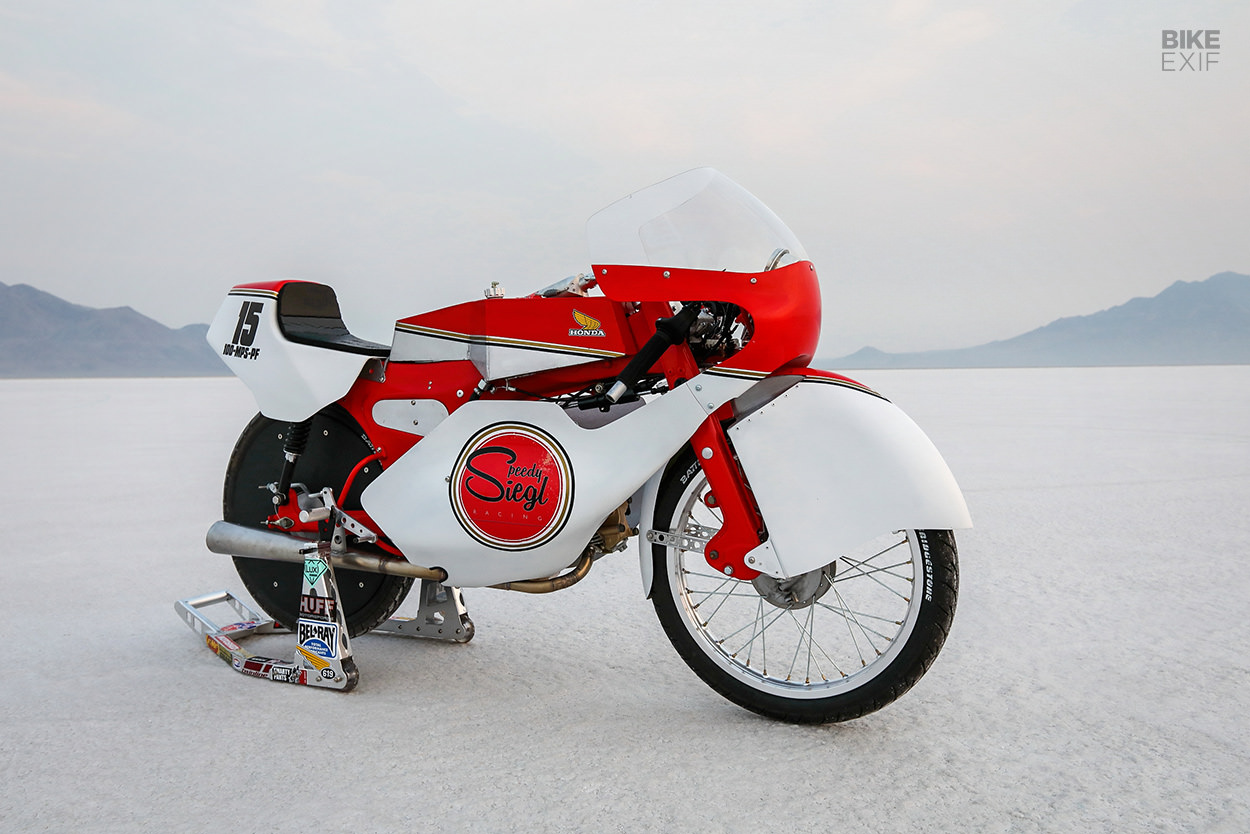 The idea of chasing a land speed record conjures up visions of blindingly fast streamliners. But the world of land speed racing is expansive, with a plethora of classes, and space for all sorts of machines. In that world, even a humble Honda CT200 can be a record holder.

This handsome little pocket rocket belongs to Isaac Siegl, who recently set the AMA 100-MPS-PF record with it at the Bonneville Motorcycle Trials. Those numbers denote a engine no bigger than 100 cc, with pushrod actuated valves, a modified frame, and only partial streamlining. 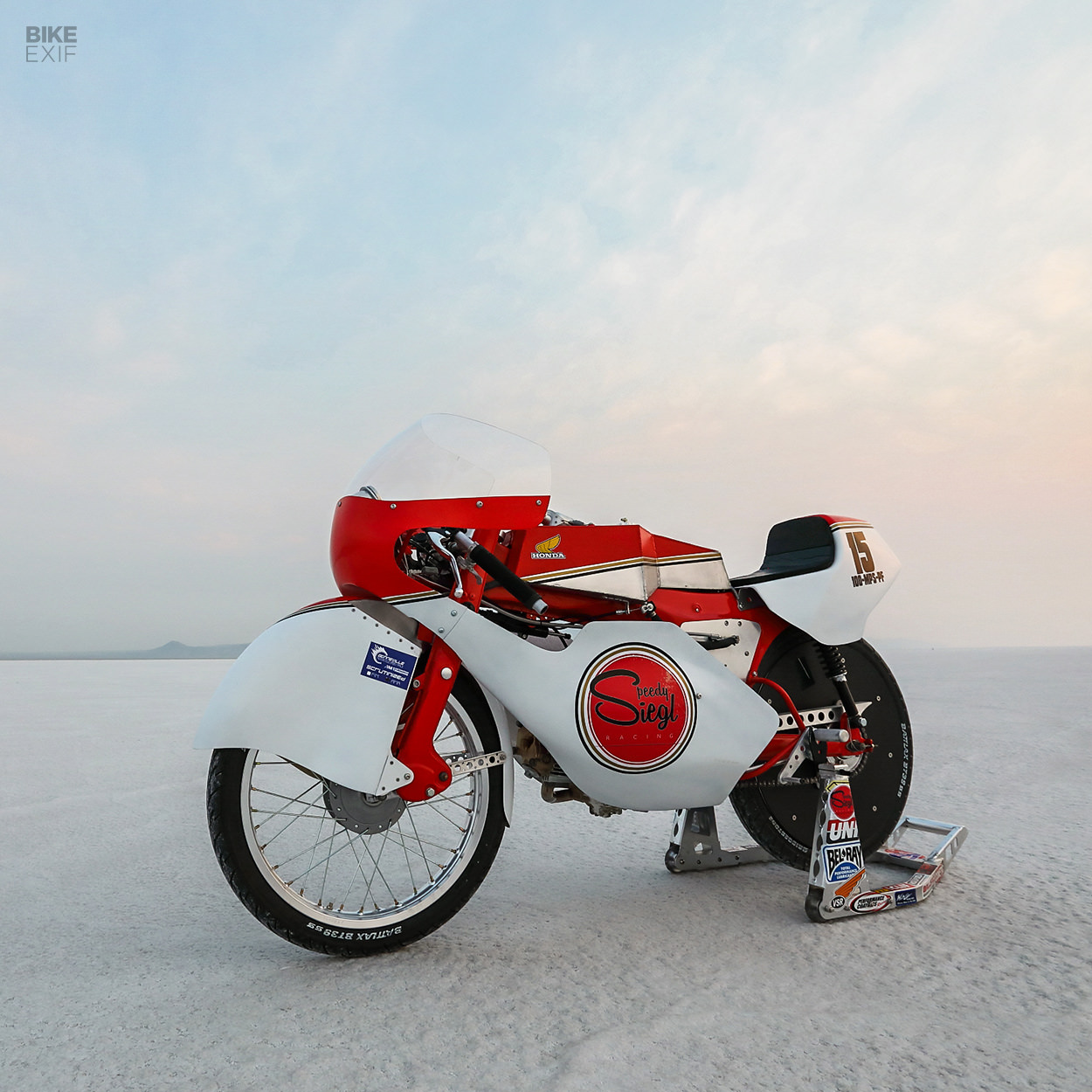 Isaac runs Speedy Siegl Racing out of the Seattle area, where he produces lightweight, racing-inspired parts for vintage and modern classic motorcycles. But he also carves out time to tackle a few custom builds a year. This is the first time he’s built a land speed bike though, despite being hassled by friends for years to give it a go.

Picking the petite Honda as a donor was a calculated decision: Isaac pored over the various AMA classes to try figure out what sort of build would have the best chance at success. “I’ve always been a firm believer in the saying, ‘It’s more fun to ride a slow bike at its limits than to try and ride a fast bike that can outride you’,” he explains. 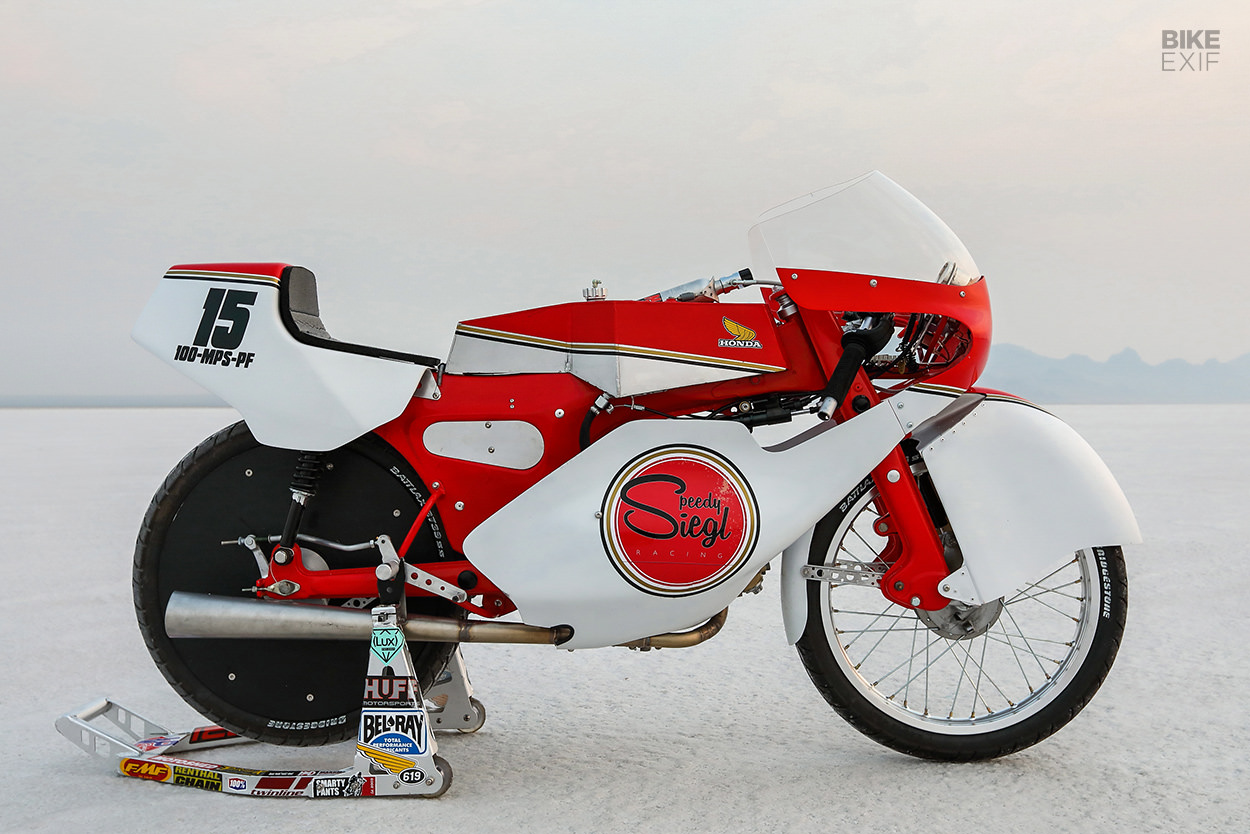 “In Japan they have a race series called ‘BOBL,’ or ‘Battle of the Bottom Link.’ They are small displacement, vintage road race bikes on kart tracks, and they look like a ton of fun. This steered me towards the older pushrod valved Hondas of the early 60s.”

Isaac started with a 1964 Honda CT200 donor, bought from Spoken Moto in Bend, Oregon. “The CT200 is the iron-headed predecessor of the CT90” he says. “Originally a 90cc pushrod commuter bike, it’s now a big bore, high compression, methanol- and nitrous-fed speed machine.”

The project was the perfect opportunity for Isaac to flex his engine building knowledge, so he went to town. He installed a big bore kit with a high compression piston to take it to 98.5 cc, lightened the crankshaft, rockers and primary drive, and did a ton of porting work. The Honda also features a dual plug head, custom camshaft, a manual clutch conversion, and a PerTronix ignition.

The engine now breathes in through a 24mm Mikuni flat slide carb, and out via a custom-made tapered stainless steel exhaust. 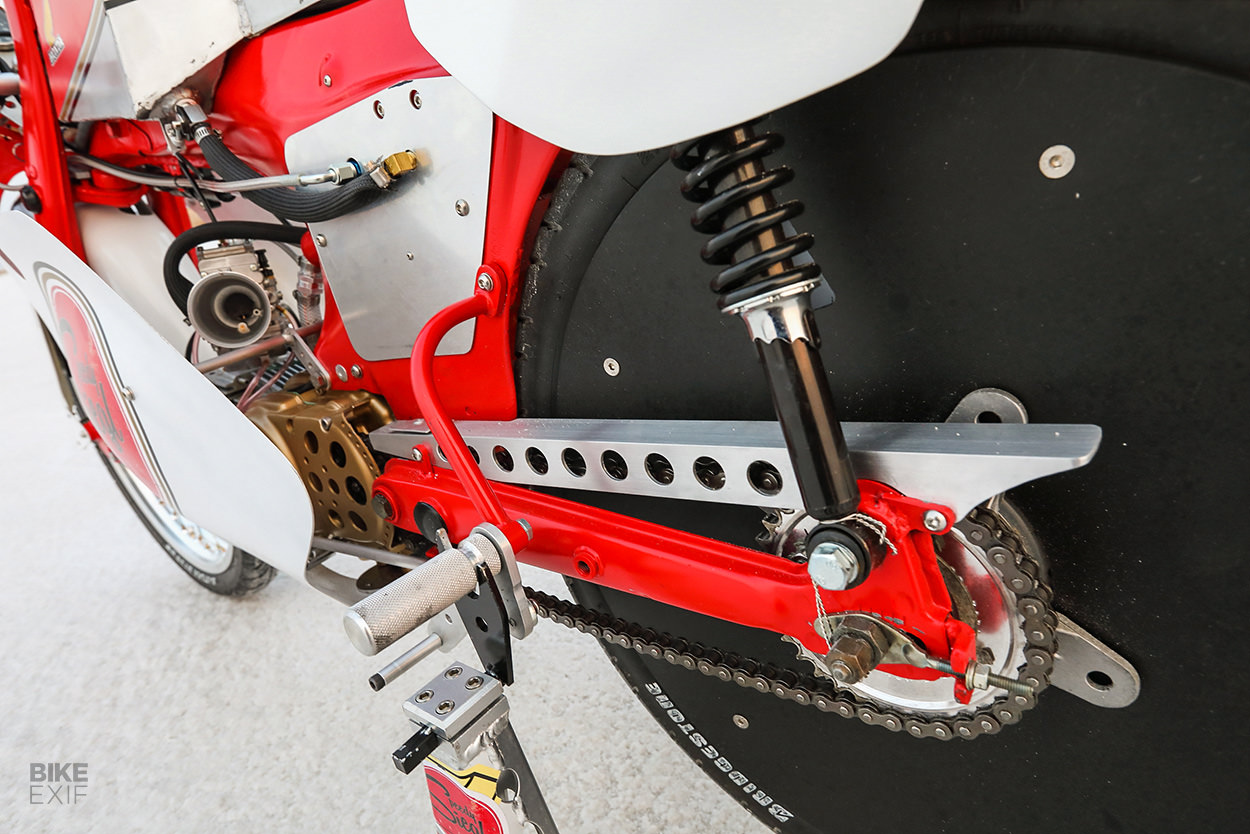 Isaac ditched the CT200’s frame, and sourced a C200 chassis from the same year instead, chosen for its shape. Most of the chassis work was mild; removing old brackets, fabricating new ones, and replacing all the bearings and bushings. A custom external fork damper was adapted from a steering damper, to ensure the bike would hold its line.

The 17” chrome rims were swapped for 18” aluminum hoops, with rear wheel covers to keep wind resistance down. Isaac also fabricated bits like the foot controls, handlebars and fairing mounts. 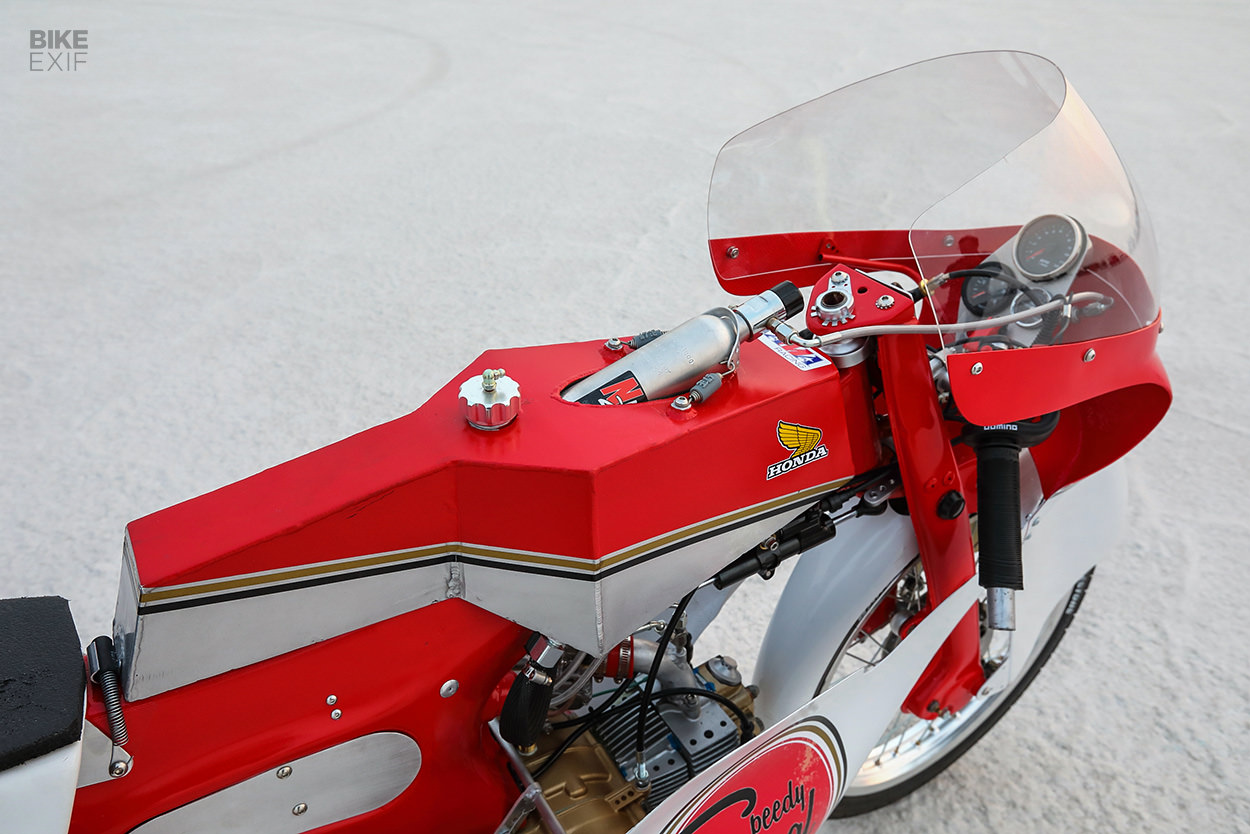 The bodywork is a mix of bespoke and repurposed parts. Isaac started building the fuel tank out of aluminum, then decided that the only place he could fit the nitrous bottle was ‘inside’ the tank.

“I had many ideas of how it could look,” he says, “but after reading the rulebook I learned I needed to have a minimum capacity of 1.35 gallons, which helped dictate the shape and size.” 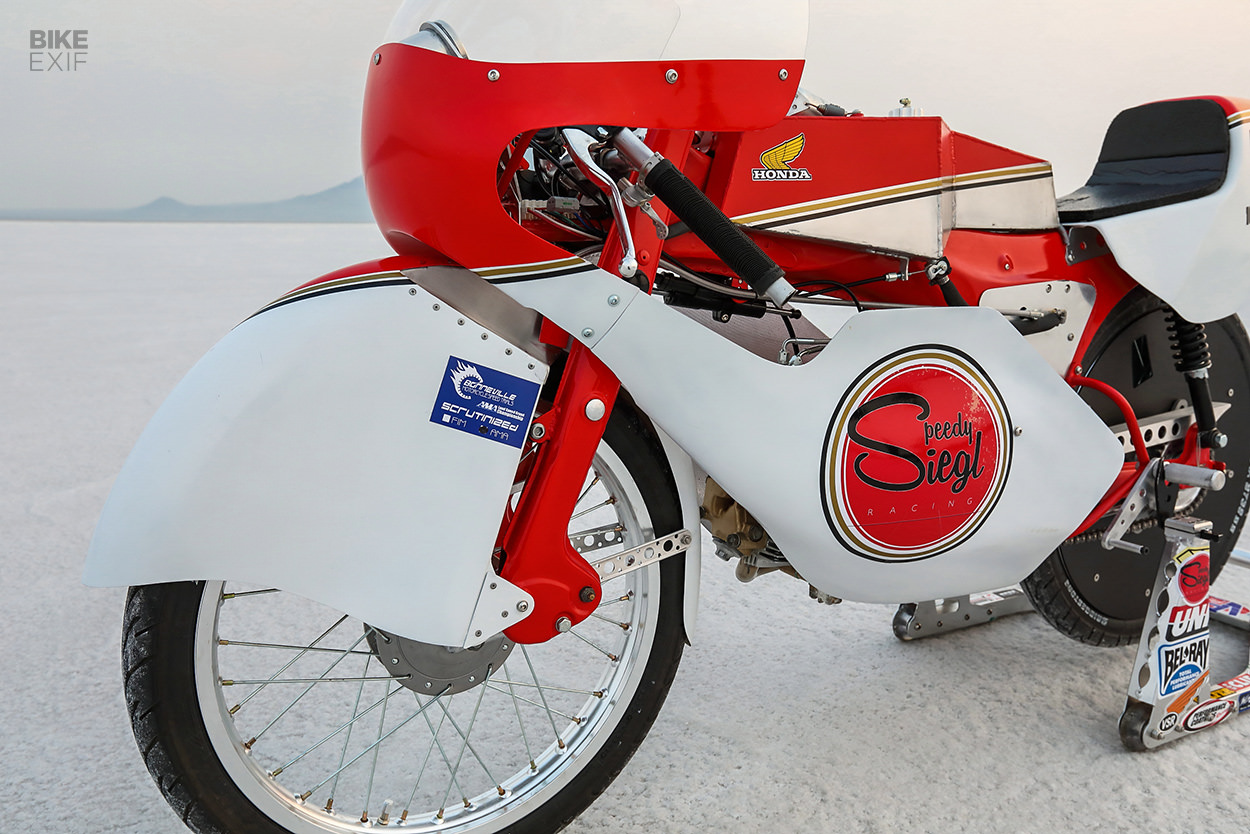 The seat is off a 1981 Yamaha TZ125, and the fairing is from a 1971 Kreidler GP50. Isaac modified it to fit the Honda, then added a generic aerodynamic front fender. It’s fixed in place—so the front wheel actually moves up and down inside it.

Isaac got stuck when it came to picking a livery though. “I wanted lots of things, but none of them looked right when I drew them out,” he says. “I eventually settled on a modified version of the classic Kevin Schwantz Lucky Strike livery, but with my own logo instead.” 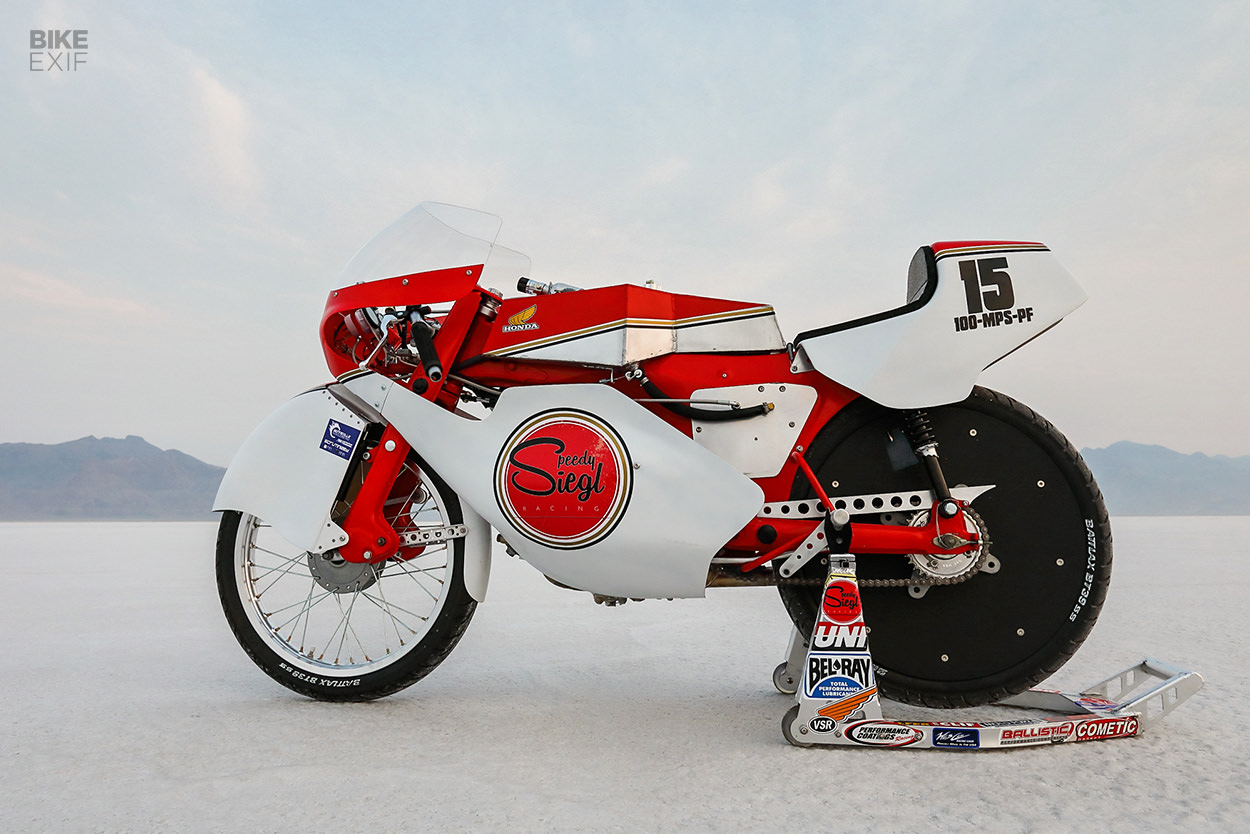 It’s a classy choice for this smile-inducing machine. But the project wasn’t without its challenges—like working with methanol for the first time, and having to re-tune everything once at Bonneville.

Isaac also found out two years into the project that the record he was trying to beat didn’t yet exist in the AMA’s books (it was listed with the Southern California Timing Association). The lack of external pressure didn’t make much difference though. He clocked 73.75 mph in his first run and 68 mph in his second, officially setting the record at 70.88 mph. 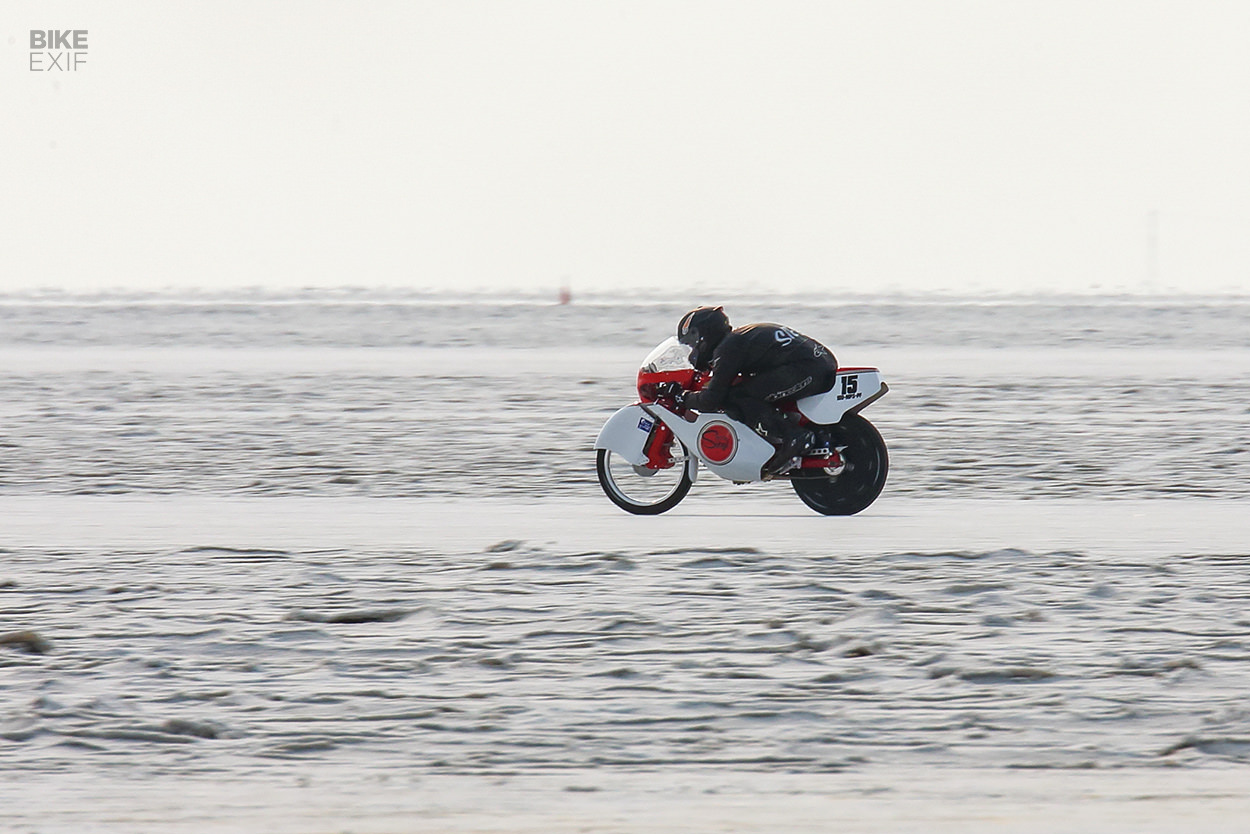 “Bonneville is like no other place on earth,” Isaac tells us. “It truly feels like another planet, and everyone there has the same goal as you—to go as fast as possible with the machines they brought.”

“It also has to be one of the most difficult places on earth to go as fast as possible. Sure, it’s flat and wide open. But it can wreak havoc on engines that are already being punished, with the altitude and the heat—and the dehumidifying effect and corrosion caused by the salt. The whole week of racing was a nonstop test of endurance, knowledge, resourcefulness and patience.” 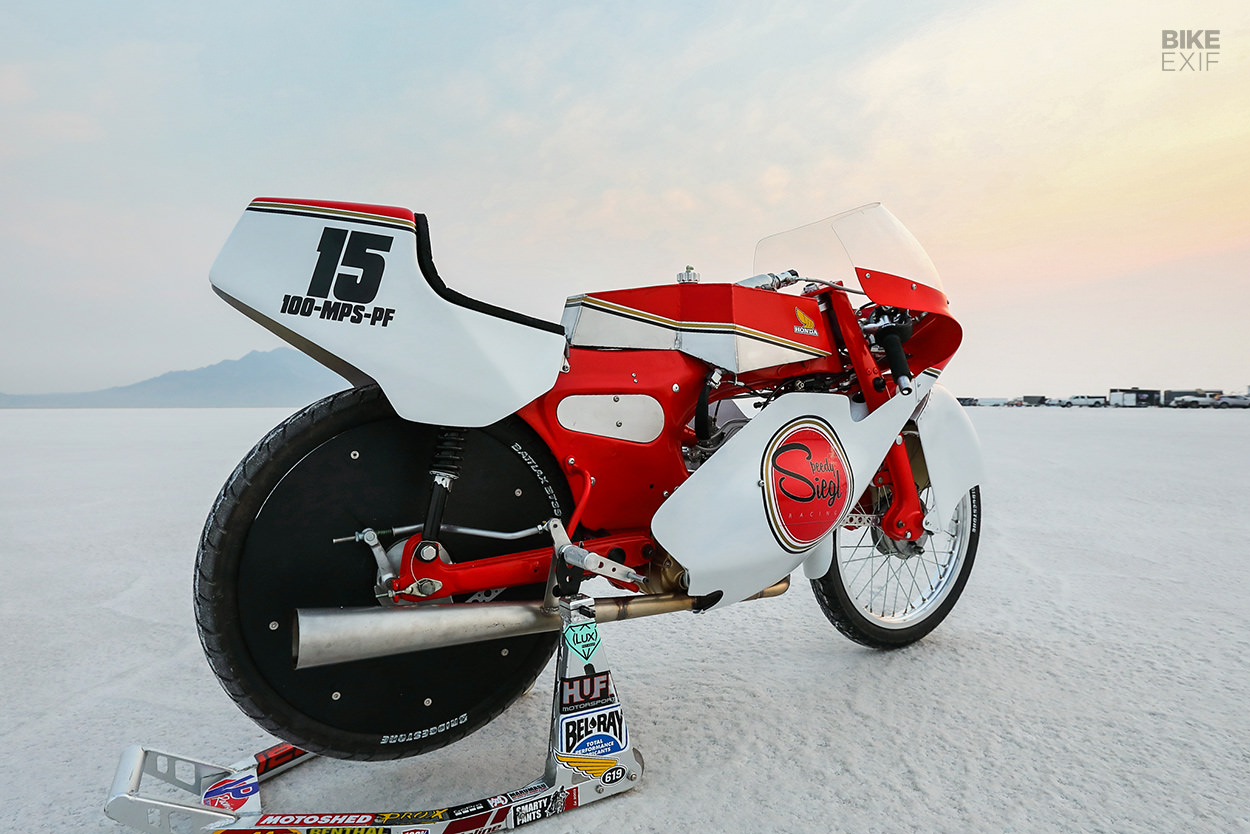