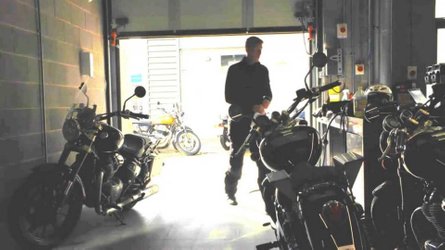 As a Royal Enfield Senior Engineer, Dean Coxson’s value on such an ambitious trip can’t be understated. Coxson’s role during the South Pole adventure may have included technical support, but back home, the engineer primarily builds post-prototype engines. For that reason, Coxson has a fair share of Royal Enfield prototypes in his office, including a few Meteor 650.

During the rider’s introduction video (above), viewers are treated to a shot of Coxson visiting his garage workstation. At the 33-second mark, the engineer walks past several test mules that bear a striking resemblance to Royal Enfield’s upcoming middleweight cruiser. Judging by the looped frame, side covers, large gas tank, and parallel-twin engine, Coxson and company are currently working on the Meteor 650.

Of course, at EICMA 2021, Royal Enfield unveiled a new cruiser concept, the SG650. That model represented more of a design exercise for the firm, but many anticipate the SG650 to become the Meteor 650 when it hits the production line. Similar to the SG650, the shadowy mystery bike in the background of video also sports a USD fork.

Unlike the concept, however, the prototype also touts a full rear fender and cast aluminum spoked wheels. While the SG650 complemented its Cyberpunk design with modern bodywork, streamlined indicators, and bar-end mirrors, the prototype looks much closer to production spec, with round blinkers and tall-stalk mirrors commonly found on stock Enfields.

Aside from the SG650 concept, Royal Enfield still hasn’t officially announced the Meteor 650’s launch. Many believe that the cruiser will break cover in 2022, and hopefully, its inclusion in the South Pole video hints at an unveiling in the near future.