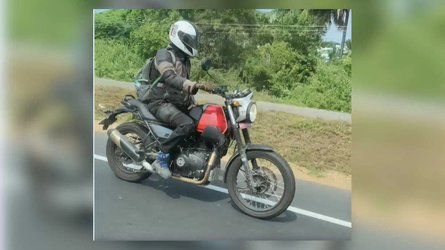 Back in August, 2021, Indian publication Motoroids obtained leaked images of what appeared to be the upcoming Royal Enfield Scram in clay scale model form. For those unfamiliar, that’s the name most expect will be used for Enfield’s road-biased Himalayan variant, although that fact has yet to be confirmed by Enfield itself.

The clay model showed a bike powered by the Himalayan’s extant 411cc single, as was expected. Changes included a completely naked look with not even the barest of flyscreens, what appeared to be matching 18-inch wire-spoke wheels, a lower front fender, and little shroud pieces bearing the number “411” bracketing the front of the tank on either side.

While we still don’t have an official launch date as of December 29, 2021, it certainly appears as though that day may be closer than we think. One eagle-eyed motorbike enthusiast with the Instagram name @dr.firozkhan_ spotted what appears to be an almost completely undisguised Royal Enfield Scram 411 testing out on an undisclosed road in India. He promptly shot a short video and posted it as an IG Reel.

The test mule is a nice, dark red with black accents, including those little shroud pieces up around the front of the tank. The headlight bezel has an interesting brushed aluminum look, and it’s unclear at this point if that’s finished model styling or something else. In any case, it gives a bit of a different character to the front end of this bike when compared to the chrome and black look of the Himalayan.

The ergonomics look upright and comfortable, with the foot pegs located straight down from the saddle in a mid-mounted position. The handlebars contribute to the upright riding position, with a pair of Enfield’s characteristic round mirrors providing the necessary rearview visibility. Since it appears largely undisguised, it seems likely that we can expect Enfield to make an official announcement about this model sooner rather than later.

Are you looking forward to this bike in 2022? What other Enfields are you most excited to see coming our way?