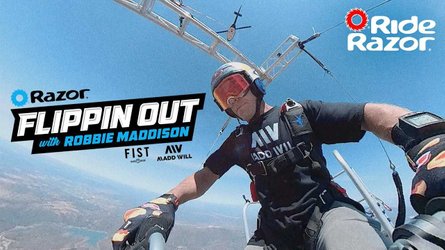 If you don’t know Robbie Maddison for his 2004 X Games gold medal and multiple world records, you’re probably aware of his recent water-riding antics and hooligan activities. Despite Maddo turning 40 this year, it doesn’t look like he’s slowing down anytime soon. In Maddison’s latest stunt, he answers a question as old as time: can a Razor MX650 children’s electric dirt bike can nail a quadruple backflip?

Most known for its line-up push scooters, Razor released the MX650 as a starter dirt bike for kids. The 650-watt motor musters 0.9 horsepower and a 17-mph top speed is manageable for most tikes while the 36V battery returns a 40-mile maximum range. Despite its minuscule size, the MX650 can hold a max load up to 220 pounds, which is perfect for Maddison’s purposes.

After the retired supercross and motocross rider shows off on his KTM, his kids really throw down the gauntlet, challenging Maddison to complete not two, not three, but four backflips in a row. Upping the ante, the little daredevils challenge dad to complete the trick on their machine, which coincidentally, is a Razor MX650.

We may never know if it was the 0.9 horsepower, 17-mph top speed, or general physics that worried Maddison, but the accomplished rider needed to call in reinforcements to achieve the challenging feet. With a metal ramp dangling from a helicopter, Maddison finally found a suitable landing area just 10,000 feet below.

Unsurprisingly, the stunt goes off without a hitch. Maddison flips the MX650 an untold amount before unceremoniously ditching his ride, pulling his chute, and gliding back down to earth. Of course, the video doesn’t speak much to the Razor MX650 capabilities, Maddison’s pedigree, or common sense in general, but it’s certainly a fun and attention-grabbing stunt.

While Maddsion may have stuck the landing, we can’t say the same for his little electric dirt bike. As a result, whether the trick counts or not is up to the viewer, but we have a feeling the actual execution of a quadruple flip was never the true intent of the video.