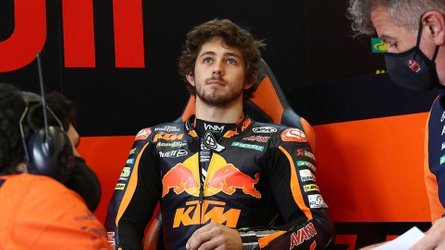 Wayne Gardner became the first Australian to win the 500cc World Championship in 1987. By 1992, the Rothmans Honda rider retired from the Grand Prix series. Thirty years later, his son, Remy Gardner, will take up the MotoGP mantle following a Moto2 title-winning season and an intense rivalry with teammate Raul Fernandez.

While Garnder’s 2021 season was nearly faultless, with the Aussie only crashing out of one race, the Tech 3 KTM rider’s off-season training isn’t going as well. On Saturday, January 15, 2022, Gardner crashed during a pre-season motocross training session. The impact resulted in a small fracture in the rider’s right wrist.

While the 23-year-old rider is on the road to recovery, the road to the first shakedown test at Malaysia’s Sepang Circuit. Before the veteran MotoGP riders take to the track on February 5-6, 2022, rookies and test riders will enjoy early access to the 2022 machinery with a three-day test from January 31-February 2, 2021.

With only 11 days to nurse his wounds, the reigning Moto2 champion may have to miss his first crack at the 2022 Tech 3 KTM bike. Of course, we’ve seen some riders return from worse injuries in less time, but Gardner’s throttle control could suffer until his right wrist fully heals.

Garnder is one of four rookies in the MotoGP paddock this year, with Fabio Di Giannantonio riding for the Team Gresini Racing, Darryn Binder with the WithU RNF Yamaha crew, and Marco Bezzecchi joining Valentino Rossi’s VR46 outfit. The final rookie in the mix is Gardner’s Tech 3 teammate and closes rival Raul Fernandez.

All four riders will gain a leg up on Gardner if he can’t return to health in time for the shakedown test, but with the Mandalika test scheduled for February 11-13, 2022, and the Jerez test lined up for February 22-24, 2022, Gardner will get another crack at the KTM RC16 before the first round in Qatar.

How To Fireproof Your Home