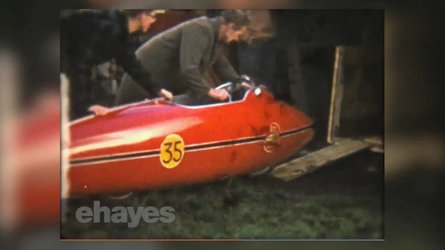 As a nation, New Zealand has a reputation for proudly wearing its do-it-yourself ethos on its sleeve. National hero Burt Munro is, of course, a particularly potent example. The builder and pilot of the World’s Fastest Indian motorcycle is quite naturally also revered by bike and speed enthusiasts around the world. Still, there’s a completely understandable national pride in being able to say “yep, he’s one of ours.”

That DIY reputation perfectly explains why Invercargill, New Zealand-based hardware shop E Hayes and Sons—and not some museum—is the home of a massive Burt Munro collection, including The Bike. Well, that and the fact that the Hayes family had a lifelong friendship with Munro, and also the fact that Irving Hayes supported much of Munro’s racing habit financially. Even beyond that, though, it’s a match that makes absolute sense, given the fact that the man spent over 20 years fettling his record-setting machine in his Invercargill home before heading off to set that record.

Knowing all that, then, perhaps it should be less surprising than it is that in 2022, E Hayes just discovered some previously unknown old video footage of Burt Munro getting ready to head out to Bonneville. As often happens in families, one day, a Hayes family member mentioned some old film footage that could come in handy for celebrating E Hayes and Sons’ 90th anniversary year in 2022.

According to E Hayes marketing manager Nick Hawes, he was quite surprised once he realized what was on the film.

“[I was] going through it and bang up comes Burt at Oreti, and Burt on the Bluff Hill before they sealed the road. Burt’s bike on the back of float at the centennial of Southland A&P Show in an exhibition for the motorcycle club,” he told Stuff.co.nz.

Irving Hayes, along with his son Norman, were heavily involved with Munro’s racing efforts—and it’s believed that Norman likely shot this recently unearthed film footage. In any case, Hawes said that they’re currently sorting through the hours of footage found and creating clips that E Hayes plans to release throughout 2022. You can view the first of these at the Stuff.co.nz link in our Sources, and if you happen to be in the Invercargill, New Zealand area, you can also go visit the Burt Munro collection at E Hayes & Sons. It’s free to view as long as the store is open, so you can go pick up some supplies and also contemplate all the wonderful things you can make with them in one place.