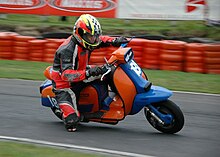 Motor scooters are in many cases, classified as separate vehicles from motorbikes, given their large amount of differences, and different evolution.  Scooter engine sizes range smaller than motorcycles, 50–850 cc (3.1–51.9 cu in), and have all-enclosing bodywork that makes them cleaner and quieter than motorcycles, as well as having more built-in storage space.  Modern scooters have automatic clutches and continuously variable transmissions (CVT), which makes them easier to learn on and to ride.  Scooters usually have smaller wheels than motorcycles. They usually have the engine as part of the swingarm, so that their engines travel up and down with the suspension. 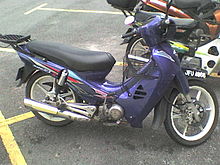 Underbones are small-displacement motorcycles with a step-through frame, descendants of the original Honda Super Cub. They are differentiated from scooters by their larger wheels and their use of footpegs instead of a floorboard. They often have a gear shifter with an automatic clutch.

The moped used to be a hybrid of the bicycle and the motorcycle, equipped with a small engine (usually a small two-stroke engine up to 50cc, but occasionally an electric motor) and a bicycle drivetrain, and motive power can be supplied by the engine, the rider, or both. There are also Sport mopeds – a type of moped that resembles a sportbike.

In many places, mopeds are subject to less stringent licensing than bikes with larger engines and are popular as very cheap motorbikes, with the pedals seeing next to no use. Mopeds were very popular in the United States during the fuel crisis of the late 1970s and early 1980s, but their popularity has fallen off sharply since the mid-1980s. In response to rising fuel prices in the first decade of the 2000s, U.S. scooter and moped ridership saw a resurgence.  Sales of motorcycles and scooters declined 43.2% in 2009 and continued to decrease in the first quarter of 2010, with scooter sales doing worst, down 13.3% compared to a 4.6% drop for all two-wheelers.

Added to wishlistRemoved from wishlist 0
Add to compare
5

Added to wishlistRemoved from wishlist 0
Add to compare
$1,139.95
33%
About Cycles Online