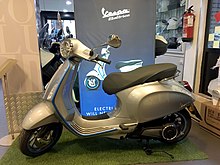 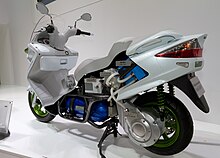 Most electric motorcycles and scooters as of May 2019 are powered by rechargeable lithium-ion batteries, though some early models used nickel-metal hydride batteries.

Alternative types of batteries are available. Z Electric Vehicle has pioneered the use of a lead/sodium silicate battery (a variation on the classic lead-acid battery invented in 1859, still prevalent in automobiles) that compares favorably with lithium batteries in size, weight, and energy capacity, at considerably less cost.[68]

EGen says its lithium-iron-phosphate batteries are up to two-thirds lighter than lead-acid batteries and offer the best battery performance for electric vehicles.[69]

In 2017, the first vehicle in the US to use the new Lithium Titanium Oxide (LTO) battery non-flammable battery technology[70] is a scooter called The Expresso.[71] This new technology charges a battery in less than 10 minutes and withstands 25,000 charges (the equivalent of 70 years of daily charges).[72] The technology, created by Altairnano, is currently being used in China where over 10,000 urban buses run on these fast charge batteries.[73]

All electric scooters and motorcycles provide for recharging by plugging into ordinary wall outlets, usually taking about eight hours to recharge (i.e., overnight). Some manufacturers have designed, included, or offer as an accessory, the high-power CHAdeMO level 2 charger, which can charge the batteries up to 95% in an hour.[74]

Manufacturers like Zero Motorcycles and recent entrants to the scooter market Gogoro and Unu have designed machines that allow quick battery swapping, for apartment dwellers who do not have a garage outlet, or for an instant recharge on the go.

In the mid-1990s, Personal Electric Transports-Hawaii (formerly Suntera, now P.E.T.) was making a 113 km/h (70 mph) capable 3-wheel enclosed-electric motorcycle called the Sunray – designed by noted solar EV pioneer Jonnathan Tennyson. The Sunray’s battery cartridge was on rollers and slid out of the front of the vehicle so it could be swapped out for a freshly charged battery at a battery-swap station conveniently located along a highway or in a city. P.E.T. also had streamlined 2-wheel seated motor scooters called Caballito’s – designed by Budd Steinhilbur, who was a well-known designer of the Tucker 48 automobile. Budd’s Caballito’s were also adapted for battery-swapping at P.E.T.’s future battery-swap stations. In 2000, P.E.T. added light-electric motorcycle and scooter visionary Todd Bank to their team, and P.E.T. secured major funding from the Los Angeles Department of Water and Power to design and prototype the first battery-swap stations for light-electric vehicles and NEV’s. P.E.T. prototypes and designs are now on display at museums across America.[citation needed]

No products were found matching your selection.